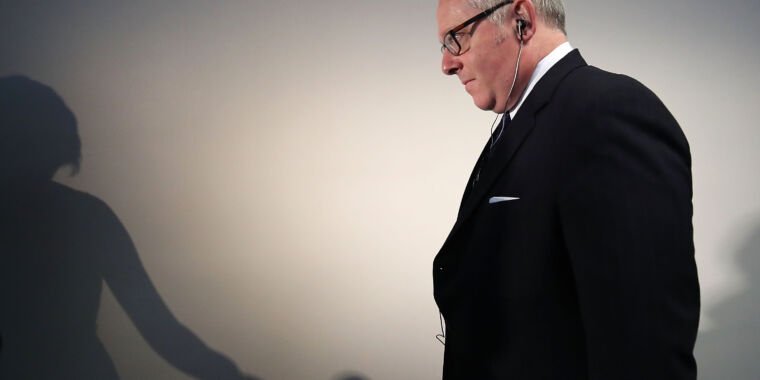 Released on the HHS website on September 11, the podcast is part of a series hosted by Michael Caputo, who currently holds the title of HHS Assistant Secretary of Public Affairs. Although Caputo has no background in health care, the White House installed him on the ward in April — a move reportedly taken to gain more control over HHS Secretary Alex Azar. Caputo is a staunch Trump loyalist and former campaign official. He started out as a protégé of Roger Stone and later worked as a Moscow adviser to Boris Yeltsin and did public relations for Vladimir Putin.

Caputo has recently made headlines for interfering with and altering scientific reports on COVID-19 prepared by researchers at the Centers for Disease Control and Prevention. The interference was intended to bring the reports more in line with reports from Trump, who has admitted to downplaying the pandemic. Caputo also raised eyebrows with a Facebook live video, reported by The New York Times Monday, in which, without evidence, he accused government scientists of “sedition” and claimed that the CDC is home to a “resistance unit.” He also spoke of long “shadows” in his DC apartment, saying leftist “hit squads” were preparing for an armed uprising after the election.

With his slightly more upbeat HHS podcast series, The Learning Curve, Caputo highlights the work of HHS officials so listeners can “learn from the people I learn from.” On the Sept. 11 episode — in which he specifically calls government scientists “an incredible group of experts” — Caputo spoke with Elinore McCance-Katz, head of the Substance Abuse and Mental Health Services Administration (SAMHSA), a branch of HHS.

McCance-Katz, who described Caputo as “one of the angels of the department,” is a psychiatrist and holds a Yale doctorate in infectious disease epidemiology. She was SAMHSA’s chief medical officer during the Obama administration, but resigned after two years because SAMHSA wasn’t doing enough to treat people with serious mental illness. The Trump administration reappointed her to the agency in 2017 and since then she has publicly endorsed some of Trump’s views on the pandemic.

In the podcast, Caputo and McCance-Katz’s conversation began unobtrusively, with the two discussing the opioid epidemic and related HHS efforts. But about 20 minutes into the hour-long episode, the discussion shifted to critique of stay-at-home orders and other mitigation efforts. Both Caputo and McCance-Katz suggested that stay-at-home orders were unnecessary and only exacerbated the mental toll the pandemic is taking on Americans.

While public health experts have long noted that lockdowns are indeed draconian, they also recognize that they have been necessary to contain the insidious spread of the novel coronavirus, SARS-CoV-2. Such movement restrictions and distancing measures have been largely effective in containing outbreaks in countries around the world – except in the United States, of course, which has failed spectacularly to contain the deadly pandemic.

Still, Caputo and McCance-Katz dismissed the mitigation strategy as one promoted only by wealthy people, who easily manage to stay at home. “The people who say, ‘It’s safer at home. Stay at home,’ are usually people who are reasonably wealthy,’ Caputo said.

“Yeah, it’s probably safer for them at home,” McCance-Katz replied. “They’re going to a nice house, a big house with all the amenities.”

They further suggested that activities such as going to a football game or a movie are mainly enjoyed by people from the “lower strata of our economic system” and therefore those activities are limited. Meanwhile, “rich people are on the beach, watching Netflix and every other streaming platform,” Caputo added. People who are essential workers, such as those who work in hospitals, “don’t have access to these subscriptions,” he said.

“And I’ll just say it,” McCance-Katz said shortly after. “We shut down the entire country before I believe the virus had a chance to spread across the country. Why?” The home orders are akin to using “a sledgehammer if I think we need a scalpel,” she added.

Caputo agreed, saying, “Without a doubt. And you know what? For me the damage is done.”

The two go on to discuss the impact of the pandemic on children and express their disgust at the fact that personal learning has been suspended in many places to try to curb the spread of disease. “What kind of nonsense is this that it’s somehow unsafe to go back to school?” McCance-Katz asked after noting that most children infected with SARS-CoV-2 do not become seriously ill. Though just before noting that people in the “lower strata” often live in busier, multi-generational homes, they didn’t discuss the risk of children passing the virus on to family members and other people in their communities.

Caputo — who, as noted, is interfering with CDC’s scientific reports on the pandemic — went on to accuse the US media of being “dishonest” and distorting public perception of the virus. He also accused the media of “knocking the president” and “trampling” optimism about COVID-19 treatments and vaccines. “I don’t think the media in the United States even cares about public health information,” he said.

“Me neither,” McCance-Katz replied.

Towards the end, McCance-Katz offered a lighter take. While she speculated that “thousands” could die of pandemic desperation, she argued that Americans are resilient and that “despair will abate.”

However, Caputo ended on a darker, confusing note. Although he spent much of the episode downplaying the pandemic, he decided to focus on the seriousness of COVID-19 and the death toll. “I find myself talking about death every morning, the first time I use my voice,” he said.

“We hear messages in our meetings… These people [with COVID-19], they drown in their own fluids,” he said. “And the doctors have told me it’s the deepest fear you can have. And that the looks on their faces when they die is something they can’t forget. These doctors can’t forget. And the way – and I talk – this is the first thing I talk about in the morning.”

According to a new report from Politico, Caputo called an emergency meeting Tuesday to apologize to HHS employees over his comments on Facebook’s live video, in which he claimed the CDC was hosting a “resistance unit.” Some HHS employees told Politico they got the impression that Caputo was planning to resign.