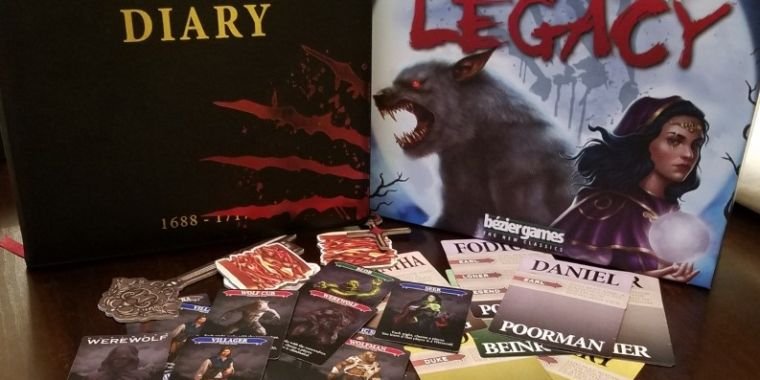 Our 16 games from Werewolf spread over 20 hours and two long play sessions. They started well enough, with enthusiastic people enjoying each other’s company, eager to stab, betray, and devour their fellow participants. Villagers — and the occasional werewolf — were hanged, and each person’s hands were bloodied. Yes, this was the ten-year-old social deduction game we all knew well, but now with sealed boxes, handfuls of stickers and a huge leather tome for the moderator to scribble in.

Ultimate Werewolves Legacy takes an old concept and combines it with newfangled “legacy” game mechanics. This means that components are permanently changed – usually the moderator’s diary – and decisions are made that affect future play. In other words, it’s a campaign game with irreversible decisions and promises all the drama that this premise brings.

The hairy devil is in the details

if you played Werewolf before† you know what to expect from this social deduction game. You will need a minimum of eight players in addition to a dedicated moderator running the game, but the experience is better with more, ideally with a group of 12-16.

Each session consists of a game chapter, with each chapter being split into three separate games. In each game you get new roles – some of you are voracious (but hidden) werewolves, while the rest are villagers full of suspicion. The game is divided into day and night phases, with the whole group trying to exterminate the villains during the day and the werewolves devour a villager at night.

The campaign consists of five such chapters, each of which offers glimpses of the story thanks to the game’s leather diary. The story itself follows a series of strange events surrounding a New England town in the late 1600s. This is the heart of the game, where players make group decisions that change the path of the village and have consequences. Or at least, that’s the idea.

The implicit promise of a legacy game is that choices are permanent. We want our decisions to create waves that ripple through the campaign. Ultimate Werewolves Legacy lose sight of this principle. It has moments when you think something really special is about to happen. Sometimes it even makes you think this one certain outcome will set things drastically. (The players don’t know most of this, though, as all paths for stickers, notes, and branches are set only by the moderator.) Feedback to players is obscured.

The only advantage of this design philosophy is the increased replayability. It would be perfectly reasonable to play a campaign and then grab another copy of the game (or the recharge pack from the publisher’s website) and play it again. You would indeed see new roles and some minor changes.

But overall, the legacy elements here are a bit of a whiff due to their smoothness. Most player picks have only a very short range. Some of the game’s best moments have these wild, unpredictable, narrative decision points full of promise, but they usually only offer a bright new skill or radical option for the next game. Then they are gone like a terror in the dark.

To avoid spoilers, I’ll make up an example. Before the game starts, the moderator (well, the diary) can tell a few sentences about a villager accused of witchcraft. As a group, players must vote to exclude the villager or declare her innocent. The outcome adds or removes a new role from the next game, although no one knows this when voting. Major decisions like these seem to be more important than adapting a single role for a single play, but that’s not the case.

Even the excellent use of props is often undermined by limiting the impact to one session. Perhaps worse, the vast majority of sticker and branch routes only change the role selection for the next chapter. This is almost always based on the villagers’ number of victories in the previous set of three scenarios. In this way, the game tries to balance the game in the long run through incremental shifts, adapting along the way. An experienced moderator hoping for a desk in making the role set won’t find love here, as their position is limited to directing traffic and reading the little bits of story scattered throughout the game (and not particularly well written).

The only mechanism that is doing extending the length of the campaign is the family system. In addition to a hidden roll, each player possesses a family member card that groups the player with one or two neighbors who are nearby. This has some interesting implications for early voting, but more importantly, it facilitates the “Most Valuable Villager” (MVV) system.

The MVV is determined by different parameters in each game, but is generally awarded to the player who makes the most significant contribution. Once a chapter is closed, the family with the most awarded members will receive stickers. These provide special powers of varying utility, the most interesting of which arrive late in the game. Unfortunately, this system feels a bit flimsy as it is separate from the story. In fact, most of the game stays different from the story that takes place because you can’t really influence it in any significant way.

While not realizing the game’s full potential, it’s not a total loss. This release would serve a group that may be inexperienced with Werewolf† It offers role sets that are roughly balanced, though not always very interesting, and it walks you through the game with some interesting mechanical twists and a memorable moment or two.

It also handles very cleverly with players falling in and out between chapters. (This is the positive aspect of short-return decisions and the story without extreme twists and turns.)

Finally, the complexity of the game is introduced in small chunks. It’s not a heavy or opaque set of rules, but the diary’s unique structure and strange nature make it a bit of a hurdle. A chapter in the preface ensures that everyone is on the same page by providing solid explanations throughout the game.

One of the fundamental features that sets this release apart from other legacy designs is its special pool size. While individual players can drift in and out, you want a core community of individuals committed to the journey. This is rough.

We all know that coordinating the schedules of a dozen people is one degree away from rocket science. The need to do this multiple times is a huge barrier, which will likely fall on the moderator – and there’s a good chance the group will sink and give up on the thing before it’s done.

In this connection, Ultimate Werewolves Legacy works best as a product aimed entirely at a younger audience. A group of students in a dorm looking to kill time is the ideal player base. The sheer length of the campaign rules out even convention play, as you could spend an entire day and still not finish.

The real point of failure here lies in the game’s unwillingness to commit. At the same time, it wants to support the short-term game with people coming in and out while promising long-term decisions with dire consequences. Investing in one approach might have worked better.

This is an undeniably ambitious release. While I think it has a modest audience, ultimately the design struggles to deliver on its premise. Like the single paragraph of the story that concludes the campaign’s end, almost everything here feels both understated and hollow.