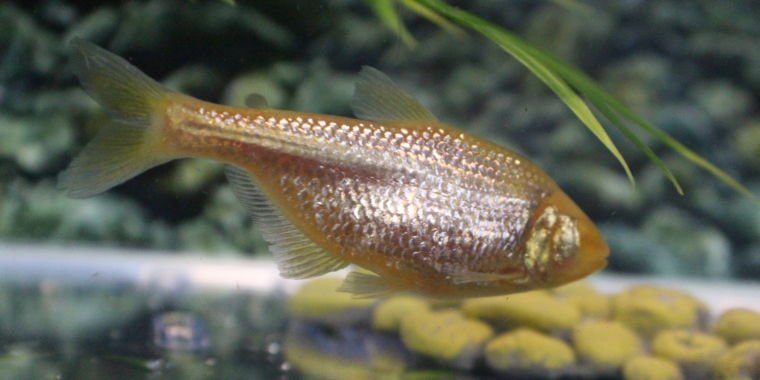 The Mexican tetra comes in different flavors. In normal riverine habitats, it is a small, standard looking, silvery fish. But some groups within the species have made their home in dark, nutrient-poor caves. Evolution has quickly rid these groups of their hungry eyes and turned them into pink, plump, blind cavefish – with a lot of metabolic changes that help them survive in the extreme environment.

A paper in Nature this week reports that the cave fish are resistant to insulin, a condition that can cause damage in itself and often predates diabetes. But the fish somehow don’t suffer the same kinds of tissue damage as humans when we have insulin resistance. The authors of the paper, led by Harvard geneticist Misty Riddle, report how they attempted to fathom the genetic mutations that contribute to this metabolic mystery. Their results show how much variation there is in how different species respond to insulin — and that studying these fish better could help our understanding of diabetes.

After you eat something, your blood sugar rises and your pancreas releases insulin to make up for the increase. The insulin binds to specialized receptors, which are found on the surface of muscle, fat and liver cells, telling them to take glucose from the blood. Between meals, when blood glucose levels drop, another hormone (glucagon) causes the liver to release its stored glucose back into the blood.

These processes are disrupted by diabetes. In type II diabetes, not enough insulin is produced, or the body does not properly recognize the insulin it makes. A precursor to the latter is called insulin resistance, and the lack of an insulin response means that high blood glucose levels persist for extended periods of time. This ultimately leads to tissue damage and numerous health problems associated with type II diabetes.

That is, unless you are apparently a cave fish. By adapting to their dark, nutrient-poor environment, these fish have evolved metabolic eccentricities: they have a reduced circadian rhythm, lower oxygen consumption, and they store more fat than their surface brethren. Riddle and her colleagues have even discovered a new metabolic quirk: Cave fish have glucose levels all over the map.

After examining a few possible explanations for this, the researchers delved into published genome sequence data and found that the cave fish have a genetic mutation that alters their insulin receptors and makes them resistant. People with the same mutation have a severe and dangerous form of insulin resistance known as Rabson-Mendenhall syndrome.

To find out what was going on with this mutation, Riddle and her colleagues bred cave fish with surface fish and observed what happened to the offspring. They found that those with the mutation weighed more than those without, even if their diet was regulated. They also edited the gene in zebrafish, a species more amenable to genetic experimentation. These zebrafish were overweight and insulin resistant.

That’s a strange result, because insulin is a growth hormone and mammals without functional insulin receptors have extremely low body fat. For the cavefish, higher weight is probably a good thing for living in nutrient-poor environments, but it’s not clear why the cavefish have such a different response to the mutation.

The most surprising finding was that the cave fish appear to be in excellent health despite their insulin resistance. The researchers write that it would be easy to imagine that there had been an evolutionary trade-off “in which physiological health is sacrificed to reap the benefits of hunger resistance.” But no: the insulin-resistant cave fish live about as long as the surface fish and seem to age even better. Where ancient surface fish acquire battered fins, humpback and sunken skin, the cave fish remain beautiful as ever. And again, unlike humans, they don’t suffer tissue damage.

Right now, studies of diabetes in non-humans tend to focus on other mammals — and even then, the results don’t always transfer cleanly to humans. But more work on the cavefish could raise new questions and new ways to answer those questions. Ultimately, these could help us understand insulin and diabetes much better — plus, simply understanding how the cave fish manage this is its own exciting mystery.