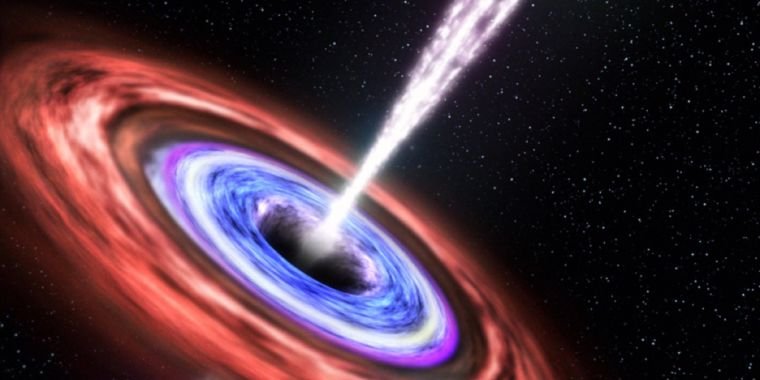 The problem with black holes is that the most interesting bits are hidden. The gravitational pull of a black hole is such that everything – including light – is trapped when it gets closer than a certain distance. As a result, everything we observe about black holes stems from their effect on the world beyond that distance. As you get closer, you pass the event horizon — the distance at which nothing escapes the black hole.

Jets are a common feature of black holes. They are narrow streams of high-energy particles that flow away from outside the event horizon. Their energy is such that the rays glow brightly and reveal themselves to us.

These jets might be able to tell us something about the black holes themselves, but that requires two things. One is observations that require a global telescope. The second, more difficult requirement, is that we need models to help us understand the observations, since we have not yet built detailed models of physics near the event horizon.

That is now changing, as astrophysicists everywhere start begging, borrowing and stealing code from plasma physicists.

Imagine a lone black hole spinning in space. Thanks to its spin and charge, it has both a magnetic and an electric field. Without quantum mechanics, nothing happens; roll credits. But quantum mechanics tells us that space is not empty, but filled with virtual particles. Virtual particles (electrons and positrons in this case) pop up in pairs, fall in love, and consume their love in fire — colliding and destroying, bringing things back to where they started.

However, in a strong electric field, the lovebirds are torn apart before the critical moment. As a result, the strong fields around our black hole generate a growing population of electrons and positrons, accelerated by the electric and magnetic fields. Their mere presence – both particles have an electrical charge – changes the fields that separated them. The result is a highly dynamic plasma (a plasma is a fluid of charged particles) that is difficult to understand.

Predictions about this are difficult because plasma modeling is computationally intensive and the best code (for a given value of the best) uses so-called magneto-hydrodynamics. That basically means that the plasma is treated as a liquid without particles. The code makes assumptions to get rid of the particles, and those assumptions just aren’t valid near a black hole.

For example, approaching a plasma as a liquid implies that there are many collisions between the particles that make up the liquid. But in these plasmas, the distance between individual particles makes collisions extremely unlikely.

To get around this, physicists adapted another type of code, the particle-in-cell model. Essentially, the plasma is modeled as a collection of particles moving around. This, as you might imagine, can require even more computing power. Each particle (a computational particle can consist of many real particles) must be moved individually. After moving, the electric and magnetic fields must be recalculated. If you need to worry about collisions, you need to search for collisions and calculate the results. The more particles you have, the longer this will take.

The advantage is that for each time step, new particles can be dropped into the model without much effort. This allows the particle production process to be included in the model. You can also disable collisions to save some CPU cycles.

A group of physicists has attempted to build one of these particle-in-cell models for black holes. Admittedly, the physicists are messing with the pairing process. But even with this shortcut, they get a good idea of ​​how the plasma builds up around a black hole and how jets form. The code even predicts the generation of negative-energy electrons falling into the black hole, slowing down its rotation and reducing its energy.

Admittedly, I don’t think this will happen anytime soon. I think it will take the astronomers a few years to collect enough data to compare with models. And it will take quite some time to properly incorporate particle production into the model. So if all goes well, I will report in five years.