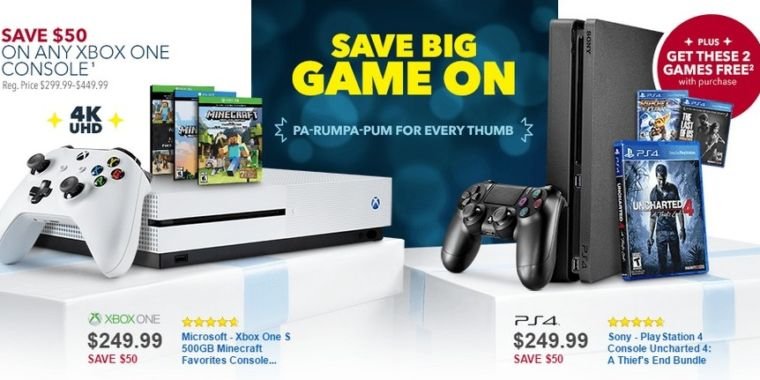 Again, Black Friday is a bonanza for gamers this year, with some rare discounts on gaming hardware and especially good prices on in-demand software. As in years past, we scoured all of the retailers’ ads and offers to pick out the best deals available the day after Thanksgiving (although many of these deals start on Thanksgiving Day itself and/or run into the weekend) . the opening times of the local store before you leave).

The general rate for a PS4 Slim packed with a 500 GB hard drive and Uncharted 4 this Black Friday season is $250, less than the usual $300. Pretty much every major retailer will have the system at this price point, but there are a few stores that also add a few extras with the bundle. Here are the best bonuses we could find:

If you need more controllers than extra games, Costco has its own Uncharted 4 bundle with a second DualShock 4 for $280. ​​If you want to buy controllers a la carte, they’ll go for $40 on Black Friday at Target, Walmart, Kohl’s, and Toys R Us.

If you’d rather invest in a PS4 Pro, the only Black Friday deal is tied to a television. If you buy a specific Toshiba 55-inch 4K TV for $750 from Best Buy, you get a PS4 Pro for free. That’s a $200 savings over what you’d normally spend for the combo, but we can’t vouch for that particular TV above the competition.

This Black Friday, a standard 500GB Xbox One S can be bought for $250 (less than the standard $300) at most major retailers, packaged with either Battlefield 1 or Minecraft. A few stores have special add-ons on top of the price reduction:

Plus, a few retailers are extending their Xbox One deals with $50 off each Xbox One Bundle. That means, in addition to the $250 and 500 GB system, you can also get a 1 TB system (bundled with Gears of War 4) for $300 at Best Buy, GameStop, Meijer, and BJ’s Wholesale. And Meijer throws in a $50 gift card with every Xbox One hardware purchase. Not too shabby.

If you need additional Xbox One controllers, Best Buy and Target sell them for $40. HH Gregg has a $30 deal on a camouflage colored wired controller if you really want the bargain price.

The HTC Vive will see its first-ever official price cut on Black Friday and Cyber ​​Monday, from $800 to $700 for the complete package. More information about the deal and store locations is available on HTC’s blog.

The New Nintendo 3DS (non-XL version) is also discounted to $100 full with Super Mario 3D Land at many retailers this Black Friday (starting at $150). You can find that price at Walmart, Target, Best Buy, GameStop, Meijer and Fred Meyer.

Black Friday is one of the best times to stock up on those expensive figurines that work with specialty video games. If you are looking for Lego Dimensions, you can get the Starter Pack for just $40 at GameStop and Target or $39 at Walmart. Walmart also has the best deal on Team Packs and Level Packs for the game, for just $14 each (Team Packs are $15 at Target and Level Packs are $20 at GameStop when Walmart is out). Target also has a deal on Lego Dimensions Fun Packs, each for just $10.

If you prefer to play in Skylanders ImaginatorsThe Starter Kit is only $37.50 at Toys R Us (Thursdays only). The same kit is available for $40 at GameStop and Best Buy, or $45 at GameStop if you can’t go out on Thanksgiving Day. You can stock up on Skylanders Sensei figures for $9 each at Walmart, or $10 each at GameStop, Target, Best Buy, and Toys R Us. Toys R Us offers Skylanders crystals for three for $20, and Best Buy offers Dual Packs for $20 each.

As always, there are too many Black Friday video game deals to list them all here. Here are some games that come with Ars’ recommendation and are available for particularly good prices this holiday weekend: