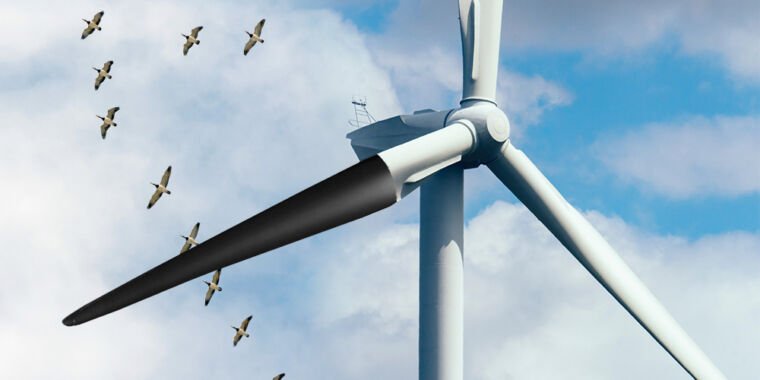 Something as simple as black paint could be the key to reducing the number of birds killed by wind turbines each year. According to a study conducted at a wind farm on the Norwegian archipelago of Smøla, changing the color of a single blade on a turbine from white to black resulted in a 70 percent drop in bird deaths.

Wind energy is currently booming, with more than 60 GW of new production capacity worldwide in 2019. As long as you place the turbines in the right place, wind energy is reliably cheaper than burning fossil fuels. And most people would rather live next to a wind farm than any other kind of power plant, even solar.

However, not everyone is a fan of wind turbines because of their impact on local populations of flying fauna such as birds and bats. Politicians with an ax against renewable energy say we must continue mining coal and oil because of bird deaths, and US President Donald Trump has called wind turbines “bird graveyard.”[s]Estimates from the U.S. Fish and Wildlife Service calculated that about 300,000 birds were killed by wind turbines in 2015 (which is likely two orders of magnitude less than the number of deaths from collisions with electric power lines per year), and bird deaths from turbines are falling. declining as the industry moves to larger turbine blades that move more slowly.

Bird deaths from wind energy may be exaggerated, but they still occur. Previous lab studies have suggested that birds may not be very good at seeing obstacles as they fly, and adding visual cues such as different colored fan blades could increase the chances of birds seeing a rapidly rotating fan.

At the Smøla wind farm between 2006 and 2013, regular checks of four specific wind turbines – each 70 m high with three 40 m long blades – found six sea eagle carcasses. In all, the four turbines killed 18 blades flying over those six years, along with five willow ptarmigan that are known to collide with the turbine towers rather than the blades. (An additional four turbines selected as a control group were responsible for seven bird deaths, excluding willow ptarmigan, during the same time frame.)

And so in 2013, each of the four turbines in the test group had a single black-painted blade. In the three years that followed, only six birds were found dead from the beating of their turbine blades. By comparison, 18 bird deaths were recorded by the four control wind turbines – a 71.9 percent decrease in the annual death rate.

When we dig a little more into the data, there was some variation in bird mortality depending on the season. In the spring and autumn there were fewer bird deaths at the painted turbines. But over the summer, bird deaths increased at the painted turbines, and the authors note that the small number of turbines in the study and their relatively short duration both merit longer-term replicates, both in Smøla and elsewhere.