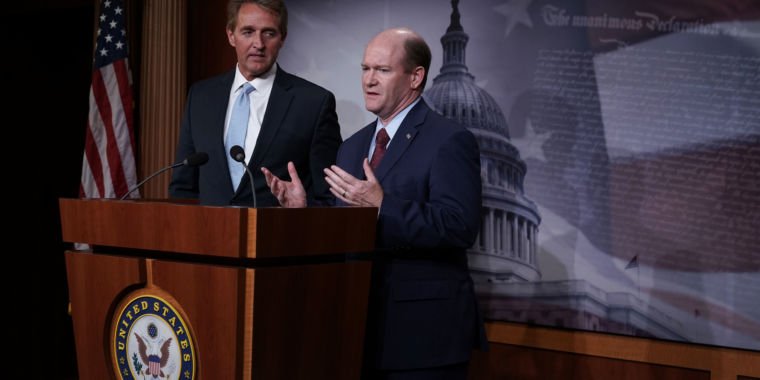 On Wednesday, Senators Jeff Flake (R-Ariz.) and Chris Coons (D-Del.) introduced a Senate bill to impose a carbon tax on major industrial carbon emitters in the US. The Senate bill is a version of a bipartisan bill introduced in late November. While most analyzes agree that the bills have no chance of becoming law, they are important as concrete examples of avenues U.S. lawmakers are taking to examine two-pronged climate change policies.

Traditionally, Republicans have resisted tackling climate change in any way, with current Republican President Donald Trump questioning climate science without foundation and hiring secretaries, consultants and agency managers to repeat similarly empty claims. But some Republicans in the House and Senate have opposed this, especially in Florida, where sea level rise and increasingly violent hurricanes threaten the economy more directly than in other parts of the US.

The idea of ​​a carbon tax was reintroduced this year by Florida Republican Representative Carlos Curbelo. (Curbelo lost his seat to a Democrat in this year’s midterm elections.) The idea of ​​a carbon tax is appealing to many Republicans because it discourages carbon emissions through a market mechanism and protects large corporations like Exxon from other forms of government intervention. A carbon tax is a predictable, monetary lever with uniform increases over several decades; in other words, companies can easily plan in their balance sheets.

Republicans also want to keep a carbon tax “income neutral” by redistributing the proceeds of the tax back to Americans in the form of a monthly rebate instead of the federal government using the revenue to subsidize other types of environmental programs.

Like the recently introduced House bill, the Senate bill would charge companies $15 per ton of carbon emitted and increase that fee by $10 per year. As a result, “legislation aims to reduce greenhouse gas emissions by 40 percent within 10 years and by 91 percent by 2050.” The hill writes.

The Senate version of the bill offers more protections to ensure U.S. emissions do indeed follow that predicted trajectory — it specifies that the Environmental Protection Agency (EPA) can intervene at any time to regulate greenhouse gas emissions if the tax is ‘working’. not good enough.

The House bill, on the other hand, prohibits the EPA from intervening unless the tax becomes ineffective after ten years.

As this year’s congressional session draws to a close, the Senate bill probably won’t get very far, but it does mark a possible starting point for bipartisan action next year.