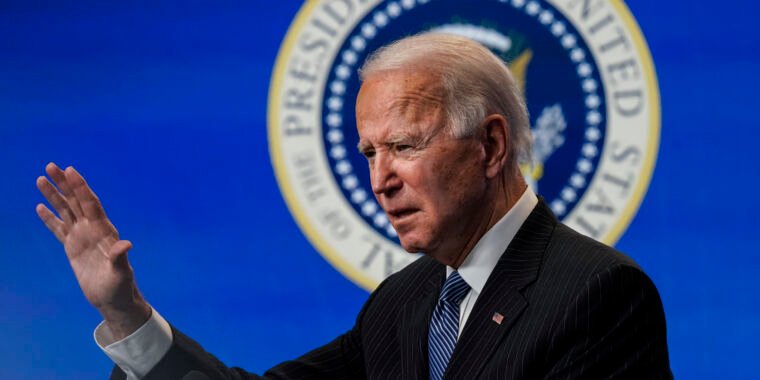 The federal government owns more than 600,000 civilian vehicles – trucks, vans and passenger cars – the vast majority of which run on petrol or diesel. On Monday, Joe Biden promised to change that.

“The federal government owns a huge fleet of vehicles, which we are going to replace with clean electric vehicles made here in America,” Biden said at a news conference to announce a new “Buy American” initiative.

This won’t be easy. In 2019, the most recent year for which data is available, the federal government owned less than 3,000 battery-powered electric vehicles, less than half a percent of the federal fleet.

Gasoline and diesel vehicles accounted for 63 percent of the federal fleet that year, while “flex-fuel” vehicles capable of burning an 85 percent ethanol blend accounted for another 31 percent. Only 4 percent of federal vehicles were hybrid in 2019, and most of these were not plug-in hybrids.

The slow progress is not due to a lack of trying. Over the past few decades, Congress passed several laws requiring the federal government to switch to more energy-efficient and lower-emission vehicles. Under Barack Obama, the federal government made some progress. For example, the number of hybrid vehicles increased from 1,766 in 2008 to 25,059 in 2017. The number of vehicles that can run on ethanol rose from 129,000 in 2008 to 201,000 in 2017.

That progress was not easy. Federal agencies require a variety of vehicle types, from sedans to large trucks and vans. In some cases, agencies struggled to find low-emission vehicles that met their requirements. Some agencies were also active in parts of the country where alternative fuels and charging infrastructure were not available.

In 2015, President Obama signed an executive order requiring agencies to plan that 20 percent of their vehicle purchases would be zero-emission vehicles or plug-in hybrids by 2020. It raised the target to 50 percent by 2025. But in 2018, President Obama said Trump signed a new executive order canceling those targets. Progress towards low-emission vehicles has stalled. The number of flex-fuel, hybrid, and battery-electric vehicles in the federal fleet all declined between 2018 and 2019.

Now Biden wants to restart and possibly accelerate Obama’s efforts. It will be easier now than it was when Obama signed his executive order in 2015. The rapid decline in the cost of batteries means that plug-in hybrids and battery-electric vehicles are now more affordable. Battery-electric vehicles haven’t quite reached price parity with conventional vehicles, but the gap has narrowed and experts expect it to close completely around 2025 — the year Biden’s first term ends.

There is now a much wider range of battery powered electric vehicles for federal agencies to choose from, including a growing number of trucks, vans and SUVs. The amount of charging infrastructure is also increasing rapidly.

Despite all those gains, electrifying 100 percent of the federal fleet will be a major project. While Biden has stated this as a goal, he hasn’t given a specific timeline. In any scenario imaginable, it will take ten years or more to completely replace the federal government’s 381,000 conventional vehicles and 191,000 flex-fuel vehicles with battery-electric alternatives.