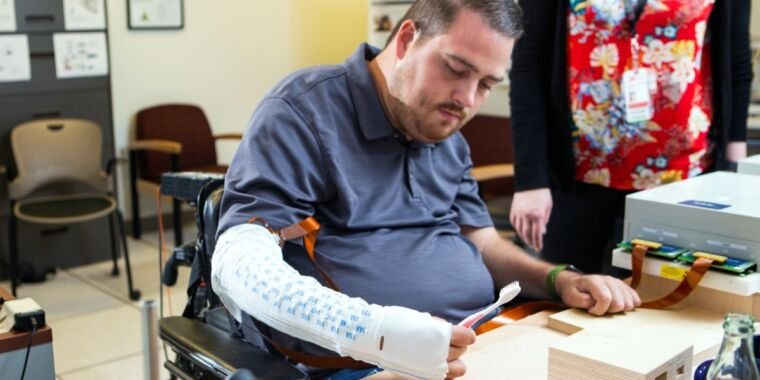 Ian Burkhart, now 28, suffered a diving accident in 2010, which severely damaged his spinal cord, left him paralyzed and confined to a wheelchair, with only limited movement in his elbow and shoulders. Thanks to an implanted brain-computer interface (BCI) developed by Battelle, he’s made significant progress in recovering small movements over the past six years; he can even play Guitar Hero again. And now Battelle scientists have managed to restore his sense of touch, according to a new article in the journal Cell.

BCIs are a thriving R&D field, with startups like Elon Musk’s Neuralink looking forward to a world where people will connect directly to their computers with external devices (similar to an EEG) or biologically compatible implanted BCIs. Such systems need a way to record neural activity (electrode sensors), a way to transmit those signals (such as a small wireless chipset), and algorithms that can convert those signals into action. BCIs are already a medical reality for patients with spinal cord injuries, such as Burkhart, or those suffering from Parkinson’s or seizures. The benefits to patients far outweigh the risks of surgical implantation.

Over the past 90 years, Battelle has been instrumental in developing prominent technologies such as the Xerox device, cruise control and CD-ROMs, along with numerous medical devices. Patrick Ganzer, lead author of the new Cell paper, is a research scientist in the organization’s medical devices division and is working with the NeuroLife group to develop a BCI for clinical trials. Burkhart has been working with Ganzer and NeuroLife since 2014 to restore motor function to his right arm.

Battelle’s “neural bypass system” has three main components, according to Ganzer. The first is the surgically implanted chip, placed in a part of the brain that responds to movement thoughts. Then the system has to take the brain wave and brain signal recordings and decode which movements the patient (in this case Burkhart) is thinking about. “When I want to open or close my hand, it looks like different activity patterns in the brain,” Ganzer told Ars. Finally, the system translates thoughts into stimulation of muscles on the arm, creating movement.

While the system has worked well in restoring a wide range of grips and minor function to Burkhart’s paralyzed hand, his injury is so severe that he has almost no feeling in his hand. “We know how important the sense of touch is for proper movement control,” Ganzer says. “Even a small change in the ability to sense touch can have a very big impact on your movement control and overall function of the upper limbs.” So if Burkhart is blindfolded, he can’t detect touch while grasping small objects like a pencil, and for larger objects like a Styrofoam glass or mug, his guesses are no better than chance. He also struggled with simple multitasking tasks, such as drinking a soda while watching TV, as mastering his hand with the BCI requires a lot of concentration.

That lack of sensation also means Burkhart isn’t getting crucial sensory feedback, so “he doesn’t feel like he owns his own hand,” Ganzer said. It is the reverse of the popular rubber hand illusion, where the sensory feedback from stroking both the real and rubber hands simultaneously essentially “couples” the subject with the rubber hand so that the brain perceives it as an extension of the physical. body—what is known as a body transfer illusion. The lack of feedback in Burkhart’s case means that there is no critical coupling.

Despite the paralysis, Ganzer and his team found that when they stimulated his skin, neural signals still reaching his brain — a phenomenon known as sub-perceptual brain activity — were simply too dim for the brain to perceive them. That means Burkhart still has a few functioning nerve fibers in his arm.

So the Battelle team set out to figure out how to amplify that tiny signal with haptic feedback, like the vibrations of a cell phone or game controller. Their system uses electrodes on the skin connected to wires that bypass the spinal cord and send subperceptual touch signals to and from the BCI implanted in its motor cortex. A band of vibration motors on Burkhart’s upper arm provides the sensory haptic feedback.

The NeuroLife group kept the haptic feedback relatively simple to prove the principle, as more complex sensory feedback requires a level of cognitive multitasking that can cause the natural feedback loop to fall apart. But the early results were extremely promising, especially for Burkhart’s ability to detect an object while blindfolded, by touch alone. “Ian is working on a random level without this touch recovery system being active,” Ganzer said. “If you activate the system and enable sub-perceptual touch to be consciously perceived, his sense of object detection and touch goes almost to 100 percent. This shows that you can amplify a sub-perceptual signal in real time.”

The haptic feedback gives Burkhart more control over his hand movements, as well as the ability to feel the right amount of pressure to use when picking up various objects, such as a Styrofoam cup, which requires a lighter grip than a heavier ceramic coffee mug. This is also the first BCI that can manage the recovery of movement and the sense of touch simultaneously.

“Instead of the grip being controlled by your will, and your movement thought for many seconds, which can be exhausting, we had residual touch signals from the brain coming along the spinal cord injury to control the extent of this grip,” Ganzer said. “This may allow him to look away from his hands, not to think about movement, so he can multitask.” The stimulation cuffs are cumbersome to put on and take off and are also a bit messy, as the electrode connections have to be bonded to the skin. So the researchers also developed an aesthetically nicer cloth cover, which is now being tested in clinical studies.

Ultimately, the team wants to build a version of the system that works both at home and in the lab and can be controlled by a tablet instead of a desktop computer. According to Ganzer, they have successfully miniaturized the necessary electronics to an order of magnitude so that it is now portable (about the size of a VHS tape) and wheelchair-mountable. Burkhart has already been able to use the system as part of his daily routine at home.

Ganzer and his team are hopeful that others with spinal cord injuries could also benefit from their system, especially since Burkhart’s injury is so severe. “This sub-perceptual touch signal is present in many patients,” he said. “It is likely that others have a less severe injury and therefore have more nerve fiber tissue.”