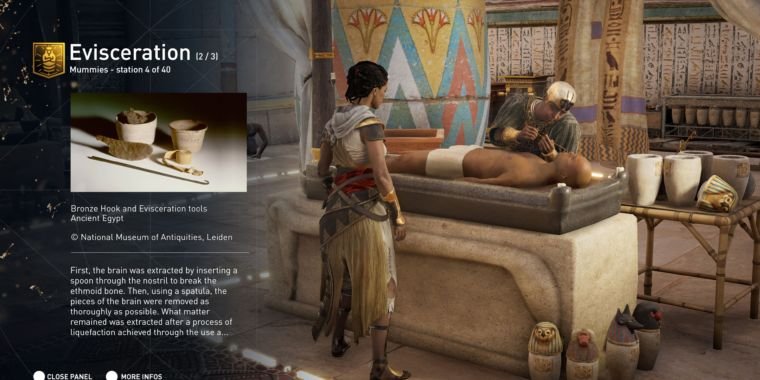 In 2005, Penny Arcade identified two main types of gamers: those who “play games to get into a trance and experience other lives”, and those who “play them to defeat the game designer by proxy”.

The former group is getting some specific attention from Ubisoft today, as the company just announced a combat-free “Discovery Tour” mode that allows players to explore and learn about Assassin’s Creed: Origins’ Egyptian landscapes without risk.

As Ubisoft describes it, the Discovery Tour mode turns the game into a “combat-free living museum, with guided tours that allow players to delve into history first-hand.” While there is an educational focus on the mode’s annotated tours, which are “curated by historians and Egyptologists,” the mode also lets players “roam the entire game world without restrictions or threats, exploring a vast landscape that includes Memphis, Alexandria, the Sand Sea, and the Giza Plateau at their own pace.”

Many games offer an Easy mode that makes playing the game a relative cinch, or they have a secret code that allows “God mode” to let you explore without the risk of death. But not many combat-based games are willing to offer an explicit mode that turns off the action for players who just want to see the game world without any worries. Nintendo is perhaps the most prominent partial counterexample, offering an optional “Super Guide” to help invincible players through difficult sections in many games since New Super Mario Bros. Wii.

As staunch supporters of the movement to unlock all game content from scratch, we fully support giving players the opportunity to see the game they paid for, even if they don’t have the dexterity to get past a tedious mission.

Ubisoft Says Discovery Tour Will Come As Free DLC Early Next Year origin’ Launching in October on Xbox One, PS4, and PC.