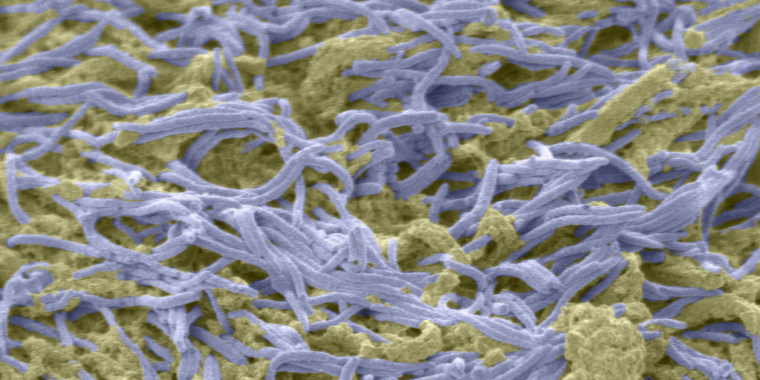 Everyone is familiar with it. The buzz of a fly, the clap as it hits the window, followed by frantic buzzing noises. A fly is glued to the window and darts along as it blindly tries to get through the glass. If only they had read The men staring at goats, they would realize the futility of their actions. It turns out that bacteria do something similar (and also failed to make the required measurement), but it’s not due to their inability to recognize glass.

Bacteria form films that are a nuisance at best and downright dangerous at worst. If you put a surface in a liquid with bacteria, they will gather on the surface and possibly exchange stories of the good old minutes long gone. But given enough time, they will often grow into a sticky, cohesive film that coats the surface. With surgical implants and the like, this should be avoided at all costs.

It’s actually kind of strange that this is happening at all. Bacteria swimming freely in the water are powered by a large fluttering propeller called a flagella. This thing doesn’t really know where it’s going, so eventually it’ll run into all the walls you’ve cruelly placed in its path. But this is a small object in a liquid, so it is subject to diffusion. In a short time, the diffusion forces will reorient the bacteria, allowing them to swim blindly away from the surface.

Given the concentration of bacteria in the liquid, you can calculate the average number of bacteria stuck to the wall. However, compare that to measurements and you would see that something is clearly wrong. There are much more bacteria on the wall than expected.

So something is holding them against the wall, allowing them to form biofilms. Identifying that something can help us interfere with it, limiting biofilm formation.

Now physicists have beautiful models of fluid flows, and with that, the movement of bacteria can be modeled. Unfortunately, the models provide contradictory results. Some predict that bacteria will trap themselves, others don’t. And those who predict that bacteria will adhere to the walls come up with different explanations for the trapping. This could be solved by observing the bacteria, but it is very difficult to look at the movement of bacteria in this context.

Bacteria are small, but not that small, so it’s easy to see them with a good microscope. And if they’re limited to 2D motion, then it’s pretty easy to track them with a microscope. However, to observe bacterial movement and entrapment against a wall, you need to track bacteria in 3D. Normal microscopes only produce a sharp image in a very thin 2D slice, and they cannot acquire stacks of 2D slices fast enough to track 3D motion.

To get around this problem, researchers used a holographic imaging system. Normally this wouldn’t work either. A hologram is actually an interference pattern between two electromagnetic waves from which an image can be reconstructed, which works beautifully. However, to view bacteria, the hologram must cover a large volume and be able to distinguish individual bacteria. And that is really not possible; each individual image has too much uncertainty to extract reliable data from.

To get around this, the researchers record three different holograms (at the same time) from three different angles, with three different colors of light. After recording, the algorithm that reconstructs the image of the bacteria requires that all three reconstructions be consistent. The result is a single image with more detail and less noise. It seems pretty obvious when you think about it, but it’s still technically difficult to put together properly.

Now that the bacteria can be tracked, all it took was to look they run into walls. Here, too, the researchers devised a clever trick. They captured individual bacteria using optical tweezers – in fact, if you focus a laser beam, transparent objects such as bacteria are naturally caught in the focus. The force of the tweezers also aligns the bacteria with the direction the light is shining.

These tweezers allowed the researchers to start their bacteria from the same spot every time. By controlling the angle between the wall and the laser beam, they were also able to change the approach angle of the bacteria. This degree of control allowed them to test the relative importance of different physical effects.

The models are confused

So, let’s imagine a bacteria swimming against a wall. Far enough away, and it’s like the wall doesn’t exist. As the bacteria gets closer, two things happen. First, the movement towards the wall creates a counter-current, because the wall means the water has nowhere else to go. Second, the stickiness of the wall severely restricts the lateral movement of the water along it. This, according to the theory, should cause the bacteria’s angle of attack to soften as it approaches the wall.

This is not happening. Or, if it does happen, the effect is much weaker than predicted.

Second, it wasn’t really clear whether the movement of the water close to the surface and the direct forces between the wall and the bacteria would force the bacteria to lie almost flat on the surface. It can end up against the wall at an angle, and that angle can direct the bacteria toward the surface or away from the surface. The researchers’ observations show that they almost always lean against the wall, so that they are pressed against it by their own forward movement. The angles are quite large and it’s unclear if the models actually do this well or not.

This is the kind of research that I find very interesting. It provides insight into a very complex problem. It forces researchers to consider their models more carefully. And although it does not offer direct solutions to prevent the growth of a bacterial film, it does give an idea of ​​the start of growth.