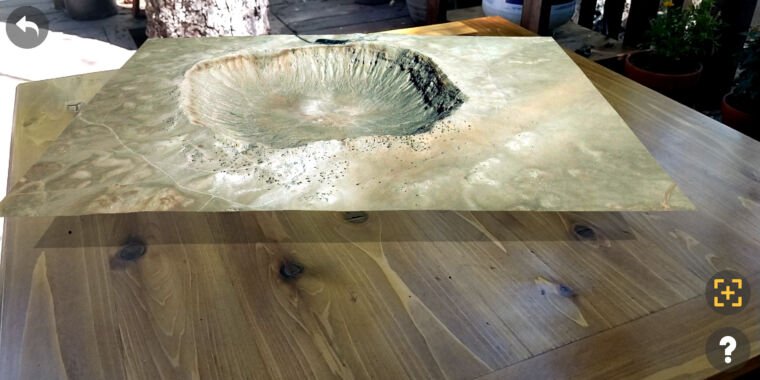 One of the main challenges in teaching geology is bringing the outside world into the classroom. During a pandemic, of course, the inability to bring students safely into the classroom doesn’t make that any easier. Fortunately, digital tools can provide new ways to access the world outside of the room you’re in.

Geology is a very spatial science and can require a lot of 3D visualization. Simple physical models (not to mention rocks) have long been used to help educate about things like faults or crystalline mineral structure. But these things can be surprisingly expensive and take up a surprising amount of storage space. This is an obvious place for technology to come in, with an endless variety of real-world objects, simulations and data – if there’s an easy way for students to access them.

Augmented reality (AR) visualizations are increasingly able to deliver on that promise. Ars has spoken with Martin Pratt about his work as part of a group at Washington University in St. Louis developing apps for classrooms, both for specialized devices like Microsoft’s HoloLens and for the phones most students already own.

“You want to display that data, not in a projective way like you would on a screen in a textbook, but actually in a three-dimensional way,” Pratt said. “So you can really look around it [and] manipulate it exactly as you would in real life. The augmented reality thing we found most appealing [compared to virtual reality] is that it provides a much more intuitive teacher-student environment. You are not hidden behind avatars. You can use body language cues [like] eye contact to show people the way to where you want to go.”

While completing a Ph.D. in seismology, Pratt had become interested in data visualization a few years ago. He took on the challenge of working on creating AR apps, starting with one (iOS only) that would allow users to explore current USGS earthquake data in three dimensions rather than just a 2D map. You can much more easily understand the geometry of a tectonic plate boundary this way, or even explore the pattern of before and aftershocks around an earthquake.

Pratt (and co-creator David Lie-Tjauw) worked with the Unity game engine and also put together a flexible app called GeoXplorer (for iOS and Android) for displaying other models. There is already a large collection of crystalline structural models for different minerals, so you can see how all the atoms are arranged. There are also a number of different types of rocks, so you can see what those minerals look like in the macro world. Another step up in scale, there are entire rockeries, allowing for a true geological campaign experience right in your living room. Even bigger, there are terrain maps for landscapes on Earth, as well as on the Moon and Mars.

And it’s not just geology. Because of people’s interest in other fields, Pratt found existing data sets, such as protein models, art and archaeology.

For now, this is a solo experience, but Pratt is working on building shared spaces into the app. An instructor could scan around the room and create a frame of reference for the room. Other users could join the session from their devices, download that frame of reference and tailor it to their perspective. Had this happened, the students would all look at the same virtual object placed and controlled by the instructor, just as if they were holding a model in front of the room — and shifted into a collaborative experience.

The group is simultaneously building a community database to hold a growing catalog of objects accessible with the app. For data that is already digital, this is a simple operation. Converting pieces of the physical world into digital models is another operation. Fortunately, this has become much easier lately. There is no need to laser scan objects with expensive instruments. Using “structure from motion” photogrammetry software, you can easily process a number of images from different angles into a model.

“We have a small light box in the lab with diffused light to show off the hand sample you want to measure,” Pratt said. “It’s on a little turntable, so you just take a shot every 10 degrees and take 36 different shots all the way around on one level, then move the model a little bit and do another 36… And try the whole of that hand sample. ”

The size and resolution of these objects are currently limited by the ability of our devices to display them at the desired refresh rate. One of the benefits of these systems is adaptive resolution capabilities that load more detail when you zoom in on a portion of an object. This has several uses; For example, NASA’s Mars rover teams could use this to walk around in images of the Red Planet, while retaining the ability to get a good look at things. But it also opens up even more possibilities for the classroom.

In addition to static models, there are also some interactive simulations in the making. Pratt teams up with glaciologists at Columbia University on a glacier simulator that lets you grow and shrink a glacier on virtual terrain, or even on your desk or stairs†

These are all practical and unique tools for teaching and learning, especially since they don’t require expensive new devices to be shared. (Although having a HoloLens certainly has advantages in terms of user interface and controls.) And as more people value this technology and contribute new models of objects and places, its usefulness may grow.

†[AR] will hopefully trickle down in a few years to graduate college students and say, ‘Oh, I don’t have to use a laptop alone anymore. I can show this three-dimensional data that I’m trying to study and understand in a different way with a device that I’ve been sitting here anyway,” Pratt said.

Of course you don’t have to be a student to enjoy it. Everyone can safely take a moonwalk or summon exotic crystals to your table. You know, like a wizard.