Assault of the Giants: A great D&D game with 5” mega miniatures |Techilink 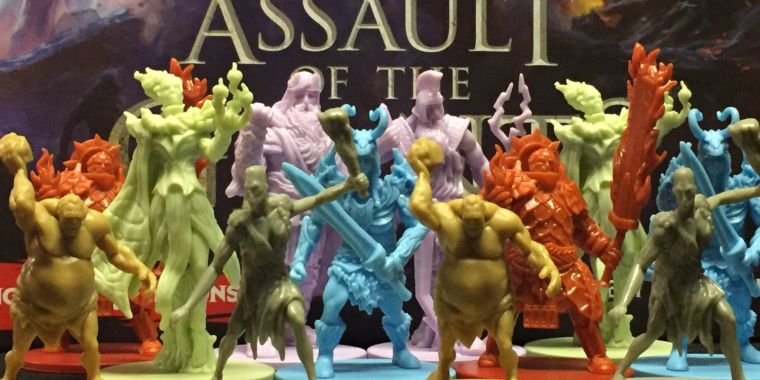 The area control genre – troops, creatures or cubes looking for majorities on a map – is tight and crowded. Although well-regarded titles such as crying havoc, inisand star wars: Revolt all arrived in 2016, the calendar keeps spinning and the plastic miniatures keep coming. This time, however, they are massively huge.

In Attack of the Giantsa horde of titans descend on Faerûn, the prominent continent seen in the Dungeons & Dragons Forgotten Realms institution. This Andrew Parks design features a conflict-themed chassis and a smooth Euro-style motor to the frame. The game is a hybrid of schools, delivering carnage and huge 5” plastic miniatures to satisfy both your eyes and your brain. The fact that it plays in a cool 25 minutes per player is just wax on the hood.

You take on the role of gigantic clans in the wake of a social split and vie to ascend the oversized throne. This is accomplished in the game by collecting Ordning points in an effort to please Annam the Allfather. As a concept it’s a bit like Game of Thrones… if everyone led an army cloned from the lifeblood of The Hound.

Properly managing your actions is at the heart of Attack of the Giants. Each player has a hand of nine cards that offer abilities such as movement, fighting and looting. As a giant, the people who inhabit the land are yours to use and abuse. You can loot their resources, you can rip spells from the Earth, or you can even flood the continent with the blood of your giant kin.

Each turn, you play one of these nine cards from your hand to perform one of the above skills. The cards stay on the table and don’t come back into your hand until you finally play the Rest action. The longer it takes to play certain cards, the more powerful they become; each card is boosted in potency based on the total number of cards you’ve already played at the table. Your recruiting ability may only offer five points to pick up some big brutes at first, but if you play it as your fourth card, you’ll get nine points instead. A twist or two in it and the gears start spinning as strategy and clever play come to the fore.

What’s especially intriguing is that the pace of the game is in your hands. Since each action only occurs once in your deck, you must discard that rest card if you want to attack again. Do you often rest so that you can play a smaller set of skills more often? Or are you trying to maximize the game, squeeze efficiency out of every possible action before burning a turn to rest and reset? If you link the strategic considerations to the state of governance and swirling environmental factors at work, it’s a wonderful system.

But who wants to rest in a game titled Attack of the Giants? Fortunately, in this game, it’s even exciting to kick your feet up and crack a cold one. In addition to picking up your cards, Rust lets you control the three neutral human giant killers that jump across the board. They can fight and harass your enemies, poking even the most ruthless titans with a sharp sword.

Of course, with a flexible core mechanic you can only get this far. What really brings the proverbial Hill Giants to the yard is the game’s glorious asymmetry. Taking a page out of the fantastic Cthulhu Wars playbook, Attack of the Giants greatly diversifies its cast. Each faction has different units, different action cards and a unique story. That’s right – this is a game with a story.

Each clan tries to exert influence through its own path. The Ice Giants want to freeze the countryside, the Hill Giants want to gather piles of food for their leader to eat, and the Stone Giants think this is all a terrible nightmare from which they can only awaken by destroying human civilization. You accomplish these efforts by meeting the requirements listed on your faction event cards. Some giants will have multiple narrative beats to work through, while others will find their path straighter. You will perform fantastic, earth-shattering maneuvers that actually add to the situation on the board. (Wait until you see the Fire Giants forging their dragon-killing golem, Vondod, for the first time.)