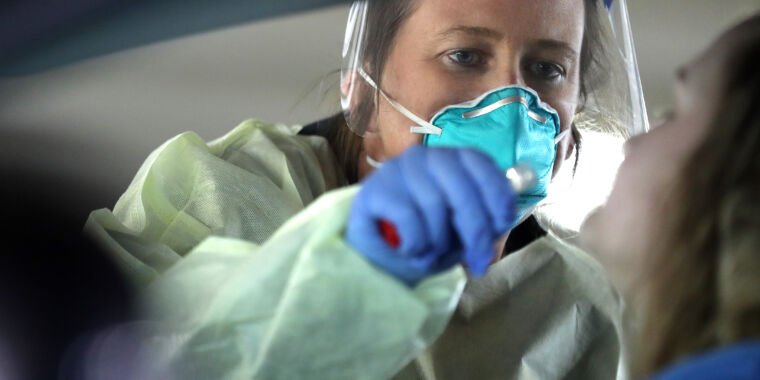 As the United States continues to struggle to ramp up basic testing for COVID-19, World Health Organization experts stressed on Monday that countries should prioritize such testing — and that social distancing measures are not enough.

“We have a simple message for all countries: test, test, test,” WHO Director General Tedros Adhanom Ghebreyesus (aka Dr. Tedros) said in a news conference on March 16.

dr. Tedros noted that as the number of cases and deaths outside of China has risen rapidly, many countries — including the US — have urgently taken so-called social distancing measures, such as closing schools, canceling events and making people work from home. While these measures can slow transmission and enable health systems to better cope, they are “not enough to extinguish this pandemic,” warned Dr. Tedros.

What is needed is a comprehensive approach, he said. “But we haven’t seen an urgent enough escalation in testing, isolation and contact tracing, which is the backbone of the response,” said Dr. Tedros.

“The most effective way to prevent infections and save lives is to break the transmission chains,” he continued. “And for that you have to test and isolate. You cannot put out a fire blindfolded. And we can’t stop this pandemic if we don’t know who’s infected.”

The message was sharp for the United States, which is struggling to ramp up its testing capacity. While other countries have conducted hundreds of thousands of tests since the January outbreak mushroomed in China’s Hubei province, some estimates suggest that the US only 38,000 people or so – a majority in just the last few weeks. By contrast, South Korea tests nearly 20,000 people every day.

In a series of press conferences over the past few days, members of the Trump administration’s Coronavirus Task Force, led by Vice President Mike Pence, announced plans to dramatically increase the country’s testing capacity, including partnerships with private companies. The officials have suggested that the country will soon be able to test tens of thousands, if not hundreds of thousands of people a week.

But confidence in the plans has been shaken by clumsy descriptions and exaggerations. That includes an announcement Friday by President Trump that Google was developing a website that would allow people across the country to determine whether to get tested and help them set up tests at a local lab. The announcement would have surprised Google. Its sister company, Verily, has since released such a site, but it only serves people in the California Bay Area and so far offers no useful information or services.

In addition, while WHO experts recommend thorough testing of suspected cases and contacts to prevent transmission, the Trump administration has so far focused on testing people with noticeable symptoms who largely self-identify as candidates. to be tested. Officials also said testing would be prioritized for health professionals and people 65 and older who had symptoms.

“We don’t want everyone to take this test. It is not necessary at all,” President Trump said in a news conference on Friday.

To date, the US has detected more than 4,200 cases in 49 states and the District of Columbia. This number is expected to be much lower than the actual number of cases due to the delayed and limited testing. 74 deaths have been reported in the US.

Read our comprehensive 8,000-word explanation about the novel coronavirus.