As sea levels rise, little of the United States will remain untouched | Techilink 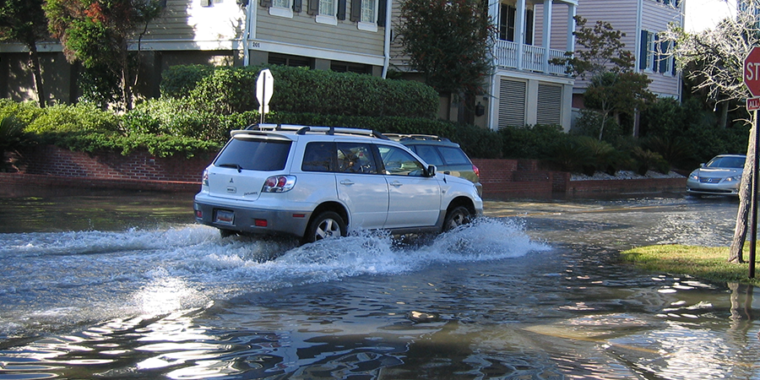 The United States is rich enough, industrialized enough, and far enough from the tropics that the rising temperatures of our changing climate won’t make any place uninhabitable. But a side effect of those rising temperatures — rising oceans — certainly will. An ever-growing list of places is already facing what has been called ‘nuisance flooding’, where even a flood can flood the streets. Big storms only make it worse. And by the end of this century, the expected rise in oceans could be more than five times what it was in the last century.

As a result, many parts of the land will simply become uninhabitable, lost to the sea. Over one-third of the United States’ population lives in counties that are currently on the coast, and more than 10 million people currently live on land that will be lost to 6 feet (1.8 meters) of sea level rise. They will have to go somewhere – and people who would otherwise move to the coast will have to find another place to move. All of this will change the dynamics of the typical movement of people within the US.

A new study published in PLOS ONE tries to estimate what that will mean for the rest of the country. Their results suggest that coastal areas are far from the only ones affected by sea level rise. Many counties far from the coast – some deep in the US interior – will see dramatic changes in the number of people moving there.

The new work was done by Caleb Robinson, Bistra Dilkina and Juan Moreno-Cruz, all of whom come from different institutions in the US and Canada. The researchers used a new way to analyze population movements that they had previously developed. Models of human migration typically evaluate a number of characteristics: population at the source of migration, population at potential destinations, proximity to a destination, and the attractiveness of potential destinations in between. There are ways to estimate how much effect each of these has to make an equation that estimates future migration. But the researchers here decided to use a neural network trained on actual data from US population movements.

Of course, climate change will drastically change the dynamics of things compared to typical migrations. Some of this can be handled easily; the researchers were able to easily prevent their model from moving people to coastal provinces that would be flooded. But it’s a little more challenging to figure out how populations already living on the coast will respond to the area where they live being flooded. To estimate this, the researchers trained their neural network on the population changes that occurred after some major hurricanes that hit the US.

To some extent, that will be true, as at least some of the people moving away from the coast will have been displaced by storm surges or damaged infrastructure. But others will almost certainly leave because the local government simply won’t be able to maintain the infrastructure in the face of ever-rising tides. So that should be seen as a limitation of this work.

The authors used this model using data from NOAA tracking the likely effects of sea level rise on coastal provinces. They did assessments using the projected sea level rise of 0.9 and 1.8 meters. The lower is about the same as the (conservative) IPCC estimate of one meter by the end of the century, and the higher one is closer to a more recent NOAA estimate of up to 2.5 meters if emissions continue to grow unchecked.

Where did they go?

At 1.9 meters the effects are dramatic but regional. Because the west coast generally slopes more steeply up than the east, there was less migration inland to the mountain west — everywhere between Colorado and California was largely unaffected. But that’s about the only region that was.

Nearly every county from eastern Denver saw an increase in population moving there. There were some general rules. Rising seas, for example, should dramatically accelerate US urbanization. Another trend is that places that are currently unpopular for migration — offshore but not necessarily urban — are suddenly seeing their populations rise simply because they’re not far from the provinces that people have to leave.

Apart from these general trends, the effects varied by region. Right now, for example, Austin is the fastest growing city in Texas, where people are largely drawn to economic opportunities. But as the current Gulf Coast gives way to the future, people who have no choice but to leave their homes are more likely to end up in the Houston or Dallas areas. Further east along the Gulf, many of the migrants will remain near the retreating coast, leading to rapid growth in areas that could eventually be at risk if sea level rise continues into the next century. This is most dramatic in Florida, where 6 feet of sea level rise will lead to a rapidly shrinking core centered on Orlando. But the model also predicts that both Orlando’s population and population density will increase dramatically, rather than seeing people give up Florida.

In contrast, as we move up the East Coast, we see more people moving further inland, often to much smaller towns than the towns they will leave. And the entire Midwest is seeing significant population growth thanks to rising oceans.

While the details are probably rough estimates rather than solid predictions, the overall picture disproves the idea that anyone could live far enough inland that they won’t be affected by climate change. While there are untouched regions, they are generally already sparsely populated, so the vast majority of Americans will eventually have to get used to having new neighbors. And while the changes could boost economic activity as businesses have to relocate where workers are, there are additional issues with the need for new infrastructure and schools, as well as the risk of rising house prices.

Our estimates of the areas affected and the magnitude of the impact will undoubtedly improve with time and as the first cases of climate-driven displacement are studied. But housing and infrastructure planning can take decades to build, and the changes predicted by this model begin to get dramatic shortly after mid-century.