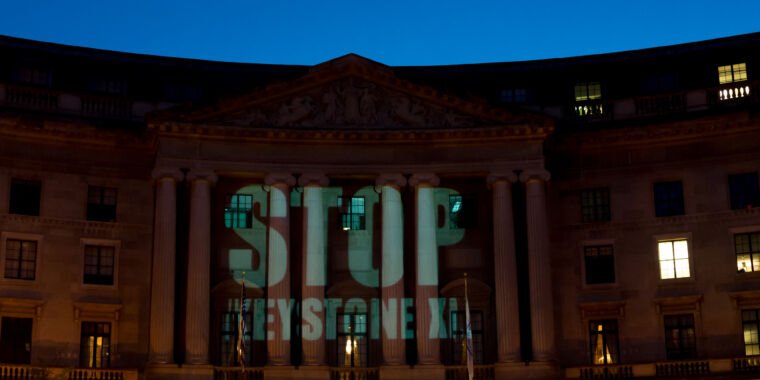 Update: This story has been updated with a statement from the operator of the Dakota Access Pipeline.

A series of decisions in recent days has halted or scuttled three high-profile oil and gas pipeline projects. The Keystone and Dakota Access oil pipelines — sources of long-standing controversy — have both faced legal setbacks that require additional environmental impact assessments. Separately, the natural gas pipeline on the Atlantic coast recently won a case in the US Supreme Court, but it has now been abandoned by the two energy companies behind it.

The Keystone XL pipeline is intended to transport oil produced in Alberta, Canada, in the Southeast to Nebraska, but has suffered major delays. The Dakota Access Pipeline, on the other hand, has been operational for several years, carrying oil from North Dakota to southern Illinois.

Both were subject to major protests. The Keystone protests focused on the climate impact of facilitating production in Alberta’s oil sands, where extraction is unusually energy-intensive. Dakota Access was hotly contested by the Standing Rock Sioux Tribe (and many others), who feared the fallout from a leak where the pipeline traverses under the Missouri River on the edge of the reservation.

The Obama administration ultimately denied approval to Keystone and halted work on Dakota Access while the Army Corps of Engineers reevaluated the proposed route. But immediately after taking office, President Trump pushed both projects forward and accelerated some remaining permits.

Those moves have been challenged in court, where tribal and environmental groups have argued that the environmental assessment’s requirements were not met. That argument has won out in recent decisions. A U.S. district court judge ruled in April that the Army Corps of Engineers should not have exempted the Dakota Access pipeline from conducting an environmental impact analysis for the river crossing. On Monday, that same judge ruled that the pipeline must stop operating until the analysis is complete, and gave a 30-day deadline to shut it down.

However, according to a Bloomberg report, Energy Transfer (the owner of the pipeline) is refusing that order. Instead, it just continues to schedule oil shipments with its customers for August. (UPDATE: Energy Transfer released a statement after this story was published, denying that they would defy a court order. “Rather, DAPL is seeking appropriate relief from that order through the established legal process,” the statement says.)

The Keystone pipeline also ran into trouble in court in April when a judge ruled that a long-standing Army Corps program that allows pipelines and other utilities to bypass many river crossing permit requirements is not legal. That lawsuit was aimed at Keystone, but the ruling affected projects across the country.

The decision is being appealed, but the Trump administration wanted the US Supreme Court to intervene with an emergency ruling to prevent the amendment from taking effect until that process is completed. On Monday, the Supreme Court upheld Keystone’s ruling, preventing construction work from starting. But the court has reinstated the current rules for any other projects.

This case was one of several factors cited by Dominion Energy and Duke Energy Sunday when they announced that they had decided to halt the Atlantic Coast pipeline project intended to carry natural gas through West Virginia, Virginia and North Carolina. to make. They argued that a Supreme Court adjournment “wouldn’t ultimately change the judicial place of appeal, nor reduce the uncertainty associated with an eventual ruling.”

It’s a surprising decision, as the companies won a Supreme Court case last month over whether the pipeline could cross the Appalachian Trail. Some environmental groups had sued, arguing that the US Forest Service should not have granted the permit, as the pipeline would not be allowed on the National Park property. Obviously, it would be logistically difficult to ever run a pipeline on the East Coast without crossing the nearly 2,200-mile path, and a number of pipelines already do. The Supreme Court ruled that the permit for the Atlantic Coast pipeline had to be maintained.

Still, Duke and Dominion said that “ongoing delays and increasing cost uncertainty that threaten the project’s economic viability” are prompting companies to cancel the project. Instead, Dominion decided to sell all of its natural gas pipelines and storage assets to “an affiliate” of Berkshire Hathaway Inc. from prominent investor Warren Buffett – a deal worth $9.7 billion.

The Keystone and Dakota Access projects could ultimately win on appeal or resume after completing new environmental assessments. However, it is also possible that the government’s position will change after the 2020 general election. But at least in the short term, these court rulings have once again brought both pipelines to a standstill.