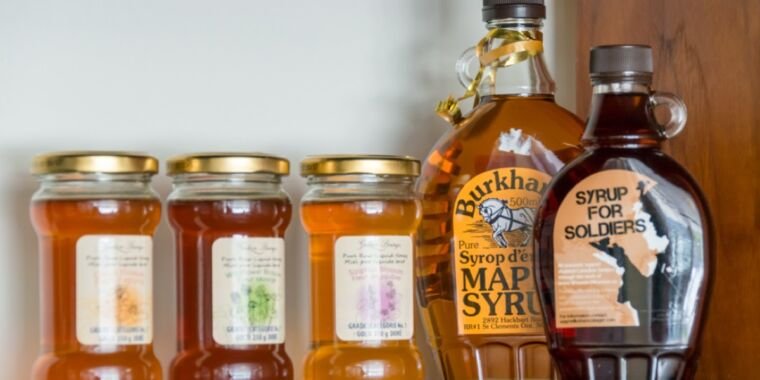 Real maple syrup is a treat for the taste buds, whether you prefer light gold varieties or robust dark syrups. But sometimes batches can have unpleasant flavors. Scientists at the University of Montreal in Quebec, Canada, have developed an artificial “tongue” using gold nanoparticles that can remove bad batches at an early stage. It’s not so much an electronic device as a simple, portable chemistry test that detects a color change when an off-flavor is present in a sample, according to a recent paper published in the journal Analytical Methods.

“Especially here in Canada, we take maple syrup for granted,” said study co-author Jean-François Masson of the University of Montreal. “But it’s much more complicated than we expected. It has the same complexity as fine wine and whiskey.” Quebec is the largest producer of maple syrup, accounting for about 70 percent of the world’s supply.

He does not refer to cheap counterfeit products whose main ingredients are high fructose corn syrup with imitation maple flavor. To be considered a true maple syrup, at least in Canada, a product must be made entirely from maple sap collected from maple trees, usually sugar maple, red maple, or black maple. Maple syrup is mostly sugar, water and a small amount of organic molecules that are responsible for the flavor profile of the final product. Those compounds account for just 1 percent of the content, but it’s a crucial 1 percent that determines whether a particular syrup is caramelized, smoked, salted, or woody, out of about 60 possible categories.

The maples store starch in their roots and trunks for the winter, which is converted into sugar. Come late winter or early spring, when the sap rises it can be collected by drilling holes in the trunks and inserting a spout to direct the sap into containers. The juice is then reduced to pure syrup in a “sugar hut” – usually a hut with slats at the top to let off steam. (“It’s a cross between Daniel Boone’s cabin and a candy factory,” Masson said.) After cooking, the syrup is filtered to remove any crystalline sugar that has formed (aka “sugar sand”).

Since 2014-2015, the United States and Canada have adopted roughly the same rating standards. Testing is usually done after filtering, while the syrup is still hot. Grade A syrups are those for consumer use – the stuff you pour on your pancakes, waffles, and so on. If a batch does not meet the criteria, it is considered Processing Grade and cannot be sold in containers smaller than five gallons. If that fails, the match is considered substandard.

The category A grade includes golden syrups, amber, dark and very dark syrups. Color classification is determined by measuring the internal transmittance of a syrup by passing a light wavelength of 560 nm through a 10 mm sample. For a golden syrup, there must be 75 percent or more transmission. A very dark syrup (usually used for cooking or baking) has less than 25 percent permeability.

When a batch is found to have an off-flavor, it is usually due to some type of contamination, micro-organisms or by-products of the fermentation. One of the most common is a “buddy” spiciness. A late harvest can alter the chemistry of the juice, resulting in higher levels of amino acids and small organic thiols. This, in turn, can affect the flavor profile. According to Masson, this situation has been exacerbated by climate change, as Quebec now regularly experiences large temperature fluctuations from day to day. “For example, there were snowflakes one day, which is unusual for May,” he said. “The day before we were in the upper 60s. That’s not good for maple syrup production.”

Masson’s expertise lies in developing instruments that can be used in the field. So the Quebec Maple Syrup Producers approached him about the possibility of a quick and easy test to remove unsavory batches on site. The current method of sorting and classifying syrups involves trained human taste testers which are very rarely supplemented in high-tech industrial settings with fluorescence spectroscopy. But there are only four such facilities in the world, according to Masson, and spectroscopy isn’t available at all to smaller manufacturers. Fluorescent spectroscopy is also not easily deployed in the field.

Masson thought that a colorimetric test would be well suited for this application, and he decided to use a plasmonic sensor, which can be configured for naked eye detection and would be suitable for the high-throughput 96-well plates used. in maple sugar huts. Plasmonic “noses” and “tongues” have been used to distinguish between normal cells and cancer cells, for example, or between different types of proteins. A 2019 paper even reported using a plasmonic-based array to detect different characteristics of Scotch whiskey.

Masson and his team designed their artificial “tongue” to specifically respond to “buddy” flavor profiles. They used spherical gold nanoparticles stirred in ultrapure water to create a reagent solution. Several molecules believed to be associated with bad tastes in maple syrup also bind to gold surfaces. So if they are present in sufficient concentrations in a maple syrup sample, they will cause the gold nanoparticles to clump together, leading to a strong change in the resonance wavelength and a corresponding visible change in color.

“It’s similar to the pH or chlorine test people do on a regular basis to make sure the pool isn’t too alkaline or too high in chlorine,” Masson said. “It will change color based on the flavor profile, so it’s a simple naked-eye test that tells you if you’ve switched from, say, premium quality premium maple syrup to one with a slightly different flavor profile.”

To test maple syrup with the artificial “tongue”, the user simply pours a few drops of syrup into the gold nanoparticle reagent. After 10 seconds, the reagent should either remain in the red spectrum – indicating a top quality syrup – or it will turn blue, meaning the syrup has that “buddy” flavor and should be classified as processing grade. The team validated its method by testing 1,818 samples of maple syrup from the 2018 harvest season, produced by sugar huts from different regions of Quebec. Those batches had already been officially assessed; the results from the plasmonic tongue were compared with the official numbers to see how well it could detect taste.

The test method works well in the field as a quick read, although there will always be a subjective element when it comes to determining color with the naked eye. Not only are there subtle differences in hues, which can be difficult to detect — especially close to the transition point — but anyone who is colorblind would find it challenging to make a decision. Very dark maple syrup also proved challenging. So Masson’s group is now developing a portable spectral photometer to magnify its plasmonic tongue, ensuring accurate measurements.

That said, the artificial tongue is not as sophisticated as the human tongue. It is specifically designed to remove the obvious “buddy” batches so producers know whether to produce or not, depending on the quality of the juice or syrup being made. Teams of human taste testers are still needed to assess and classify the remaining batches. “Maple syrup is the same as wine,” Masson said. “You wouldn’t want wine to be classified based on a robot deciding whether it’s premium quality or low quality because it can lack that mouthfeel that we love so much.”