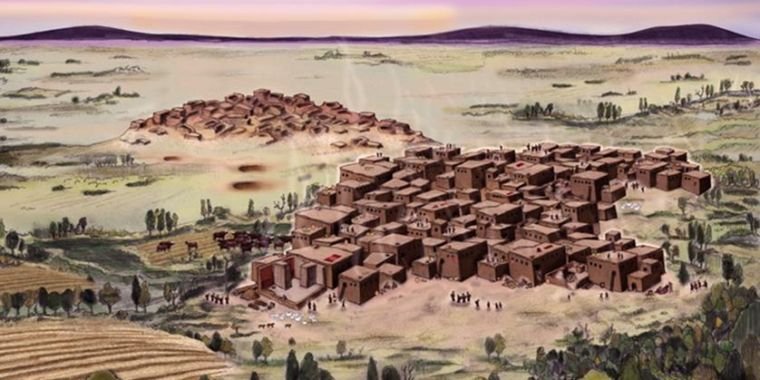 About 8,200 years ago, melting glaciers poured fresh, cold water into the North Atlantic, suddenly making the climate in Europe and southwest Asia colder and drier over the next 160 years. Evidence of that event can be seen in Greenland ice cores, tree rings and lake sediments in Europe, and lake sediments and peat deposits in Southwest Asia.

How did it affect people who were just beginning to adapt to farming? Archaeologists cannot link with certainty what happened at an archaeological site, such as Çatalhöyük in Turkey, to what pollen and oxygen isotopes say happened 160 km (99.4 miles) away at Lake Nar, because of local conditions. may vary.

New chemical analysis of animal fat residue in broken pottery has now given us a clearer picture of how changes in the North Atlantic affected life in Çatalhöyük. The local climate became slightly cooler throughout the year and noticeably drier in summer, which would have reduced crop yields and the availability of food for the livestock and goats of local farmers. Equipped with direct evidence of local climate changes, archaeologists examined artifacts at the site to understand how humans coped with the lean times.

Slightly colder, with much less rain

Early farmers settled in Çatalhöyük about 9,050 years ago; by the time the cold snap rolled around, they had long domesticated livestock, goats, and some grain crops. The site was a sizeable city where people lived in large, communal houses with multiple rooms and interior structures, and the residents buried their dead nearby. Over the centuries, they have left layers of buried evidence about the details of life here: the remains of their homes and hearths, the graves of their dead, bits of the animals and plants they ate, stone tools, and more than 13,000 fragments of broken pottery once used for cooking and preserving food.

And some of those pottery fragments still contain remnants of those ancient meals, especially fatty acids commonly found in animal fats. The ratio of deuterium (an isotope of hydrogen with a proton and a neutron in its nucleus, rather than just a proton) to other hydrogen isotopes in those fats can reveal information about ancient climate. In general, local water supplies have more deuterium than regular hydrogen when there is less precipitation; plants and animals integrate those hydrogen ratios into their own bodies, and millennia later, archaeologists can use them to learn about ancient rainfall.

Combine that with the fact that the layers of artifacts in Çatalhöyük have been very accurately dated to radiocarbon, and archaeologists can reconstruct people’s responses to ancient climate changes in a very specific location rather than making general statements about general trends across an entire region.

Chemist Mélanie Roffet-Salque of the University of Bristol and her colleagues found that in the period from 8,295 to 8,110 years ago, deuterium ratios were about nine percent higher than those in earlier and later layers of Çatalhöyük.

That ties in well with climate modeling studies in which Roffet-Salque and her colleagues combined the results of 10 climate models for Greece and Turkey, and predicted a 10 to 15 percent decrease in summer precipitation during the cool period (winter precipitation did not increase). does not change much, resulting in an annual average of only four percent drier). The models also showed a drop of about 1 to 2 Celsius (1.8 to 3.6 Fahrenheit) in mean annual temperatures. The resulting increase in deuterium ratios aligns well with what archaeologists saw in animal fat remains from the period.

The abruptly cooler, drier climate must have been bad news for both crops and livestock in southern Turkey. Less rain means lower crop yields, and it also means scarcer foraging for cattle and goats. Colder winters usually mean cattle need more calories to stay warm and maintain bodily functions — up to twice as many if the weather is cold enough. Livestock bones from the atalhöyük strata that correspond to climate change show signs of malnutrition.

“Livestock was badly affected in Çatalhöyük, and the early farming community had to show resilience and adaptability in a period of abrupt climate change,” Roffet-Salque and her colleagues wrote. Most notably, the inhabitants of Çatalhöyük switched to raising more goats than cattle. Archaeologists studied the bones of cattle at the site and found that around the time of the century-and-a-half cold spell, cattle herds in Çatalhöyük were shrinking, while goat herds were getting bigger. Goats are more efficient milk producers than cows and can graze smaller areas, so the shift may have been an attempt to make the best use of scarce resources.

Around the same time, archaeologists noted that bones from slaughtered animals showed more sticky marks than those from previous layers, suggesting that either humans had learned better slaughter techniques or they were putting in more effort to get every bit of flesh off the bones — more likely, a combination from both. And archaeologists have begun to find the bones containing fat and marrow that are fractured more often, which is usually a sign that people are struggling with food scarcity.

Facing lean times, the people of Çatalhöyük have made drastic changes in how they lived and built their homes. The large, multi-room community homes of the first thousand years or so shifted during the cold spell to what Roffet-Salque and her colleagues describe as “light shelters with wide open space.”

And in the following centuries, those shelters eventually gave way to a different form of multi-room dwelling, with a central living space surrounded by smaller work and storage areas. While pre-crisis homes had housed several families, based on the artifacts found in them and the large number of burials associated with them, post-crisis these homes housed smaller, more independent households. Archaeologists aren’t sure why people would have changed their living arrangements so drastically in response, but in the end it wasn’t enough to keep the settlement going.

“They proved unsustainable and the previously thriving settlement quickly dwindled, leading inevitably to its relatively abrupt and sudden collapse and eventual abandonment in 7925-7815 cal BC,” Roffet-Salque and her colleagues wrote.

Where have they all gone? Roffet-Salque and her colleagues speculate that the climate crisis may have played a role in the migration of farmers from Anatolia to Eastern and Central Europe. Of course, it is likely that climate change alone cannot explain all the differences in how people lived in Çatalhöyük or their eventual migration elsewhere.

“Our ability to detect such changes related to climate change is just the beginning of the story, not the end,” University of Bristol chemist Richard P. Evershed told Ars Technica. “Now we can start exploring the other factors.”