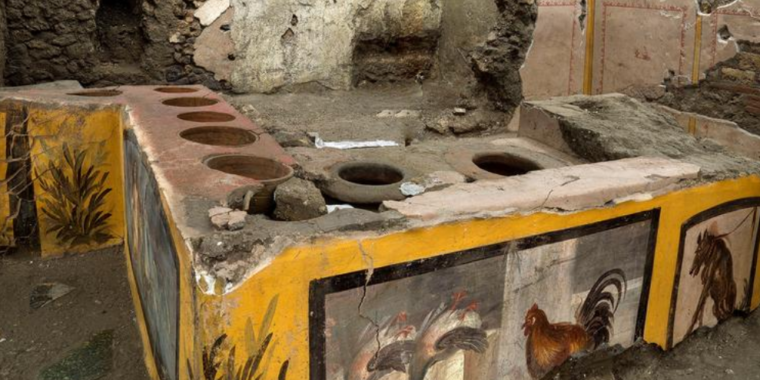 A recently unearthed termopolium, or “hot drink counter,” served ancient Roman street food — and plenty of wine — to the people of northeastern Pompeii in the days before Vesuvius destroyed the city in a catastrophic eruption in 79 CE. The counter, painted bright yellow and decorated with detailed frescoes, would have been a quick stop for hot, ready-to-eat food and drinks. And the small shop still has the remains of its owner and perhaps one of its last customers.

Archaeologists found the bones of at least two people in the termopolium. It’s hard to say much about who they were or what they were doing when they died, because looters in the 17th century haphazardly pushed the skeletons aside, scattering one around the room and parts of the other into a large dolium were stopped, or serve pot. The scattered bones usually belonged to someone at least 50 years old, who may have been in bed as the pyroclastic current swept through the city. Space has been set aside in the shop for storing a bed, and archaeologists found nails and wood debris among the scattered remains.

The termopolium is a surprisingly modern setup – or perhaps it’s more accurate to say that modern quick-service restaurants are based on a surprisingly old model. Food was displayed in deep terracotta pots called dolia, which were placed in holes in the top of the counter, just as plastic or metal tubs placed in the counter today contain ingredients at Subway or Chipotle. Presumably, the jars could be removed and stored at the end of the day. Archaeologists also found ceramic cooking pots, flasks and amphorae for wine storage, and a bronze drinking bowl.

Getting a takeaway from an eatery like this one, or sitting down to eat at a local taberna, would be part of the daily routine for most people in a Roman city like Pompeii. Today we think of eating out as a pricey convenience or a splurge, but for most people in Roman cities, cooking at home was not a practical option. Most city dwellers lived in condominiums called insulae, and while they usually had fireplaces for heating and basic cooking, they didn’t have a full kitchen.

Like the food counter, condominiums are a surprisingly old idea. In cities like Rome, Pompeii, and Naples, insulae were popular real estate investments for the wealthy. And just like in the modern world, ancient Roman landlords often skimped on construction and maintenance to fill their profit margins. The bottom floor of each building would usually contain shops, taverns and restaurants, and the most expensive apartments would occupy the next floors. Apartments on the upper floors, which were smaller and required several flights of stairs to reach, were the cheapest.

And all those insula residents had to eat, so they went to brightly colored termopolia and tabernas (hot drink counters and pubs) for their meals. At its peak, just before Vesuvius buried everything in ashes, the streets of Pompeii were home to at least 80 termopolia serving inexpensive, relatively simple yet surprisingly varied dishes. Bread and cheese would have been staples, along with lentils, cheese, beef and chicken. Soups and stews would also have been commonplace, and most counters would have served wine and beer.

In jars near the newly excavated termopolium, archaeologists found the long-dead remains of the establishment’s last dishes of the day: bone fragments of ducks, pigs, goats and fish, along with the remains of land snails. (One of these things isn’t like the other.) The ancient food scraps are “a testimony to the great diversity of animal products used to prepare dishes,” site archaeologists Valeria Amoretti told Reuters.

At least some of the colorful frescoes painted on the front and sides of the zigzag counter may depict menu offerings: Two of the painted panels depict a rooster and a pair of ducks hanging upside down. Archaeologists say the animals would have been slaughtered on site, then cooked and served. A fresco shows a termopolium in business.

Another panel features an unfriendly-looking dog on a chain, which may have been intended as a warning to would-be robbers. Another thing that’s not new: A disgruntled customer or employee scratched a rude message on the black border around the painting: NICIA CINAEDE CACATOR, or “Nicias, shameless shitter!” Obscene graffiti appears to have been a popular pastime in the ancient Roman world, and Pompeii has provided numerous creative examples. In a corner of the store, archaeologists found the bones of a small dog, about the size of a modern beagle.

“Although quite rare, dogs of such small size indicate that they were deliberately selected in Roman times to obtain such a result,” park officials wrote in a statement.

On the other side of the counter, another painting shows a sea nymph, or Nereid, riding a seahorse. After nearly 2000 years, the paintings are still vibrant and the yellow background is still as bright as any modern fast food chain. The old owners decorated the broken terracotta floor with pieces of colorful marble.

Now that the excavation is complete, the lab work can begin. Samples of food scraps and other material have been sent to multiple universities for more in-depth analysis.

Archaeologists have unearthed traces of at least 80 termopolia like this one at Pompeii, but this is the first to find them intact and fully excavated. It stood in a small public square with a cistern, fountain and water tower. Not far away, another shop had a fresco of gladiators fighting (note: gladiatorial competitions were banned in Pompeii from AD 59 to 69 after riots broke out during the games). At one end, the square borders the Vicolo dei Balconi, a long alley, lined with the ruins of once stately homes; their balconies collapsed during the eruption but remain well preserved, albeit moved to street level. At a crossroads in that alley in 2018, archaeologists found the skeleton of a man who had been crushed by a large rock during the eruption.

This part of northeast Pompeii is now known to archaeologists as Region V. It is the same part of the city where archaeologists excavated the House of Orion, which features extensive floor mosaics depicting ancient surveying tools and techniques. Region V forms part of the boundary between the 44 hectares that ancient archaeologists have excavated and the hectares still buried under a meter-thick blanket of volcanic ash. That virgin territory can hold at least 7 stray bombs from World War II.