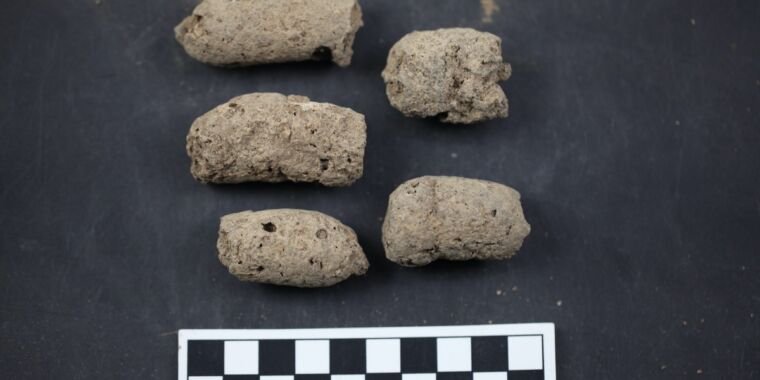 Combing through monsters of old feces probably won’t be a lot of people’s idea of ​​a roaring good time. For archaeologists eager to learn more about the health and diet of past populations — as well as how certain parasites evolved, the evolutionary history of the microbiome — such samples can be a veritable gold mine of information.

Still, it can be difficult to determine whether fecal samples are from humans or produced by other animals, especially dogs. Now an international team of scientists has devised a new method for doing this, combining host DNA and gut microbiome analysis with open source machine learning software, according to a new article in the journal PeerJ.

The challenge of determining whether paleofeces and coprolites are of human or animal origin dates back to the 1970s. Usually only those samples found with human skeletons or mummies could be classified with any certainty as being of human origin. Exceptions can be made for samples found in ancient latrines, as they are most likely to be human; however, samples found in waste deposits are more equivocal.

Subsequent work to document the morphology of mammalian feces has made it easier to separate human from animal samples, as there are enough differences to make such a distinction. The exception is dog poop, which is strikingly similar in size and shape to human feces, is often found at the same archaeological sites, and has a similar composition. And frankly, some ancient societies routinely ate dog meat, when dogs are known to nibble on human feces. So DNA from both could be present in the same archaeological sample.

There are some helpful pointers. For example, ancient dog poop samples “usually contained masses of short, nibbled dog hair and strange inclusions, such as fragments of clothing and rope,” the authors of the PeerJ paper wrote. The presence of specific parasites can also indicate whether a sample is human or dog, such as pinworm eggs (Enterobius vermicularis), which are usually only present in human feces. Scanning electron microscopy (SEM) may also be useful for identifying plant remains (such as pollen grains) in old samples. Rehydrating the samples can also help differentiate, as human feces turn the rehydration solution dark brown or black; animal samples usually remain clear or turn yellow.

This new coprolite identification method, called coproID, combines host DNA analysis with analysis of the different colonies of microbes that live in humans and dogs. The scientists used their open source software to analyze both a previously sequenced modern fecal dataset, as well as a newly sequenced dataset of paleo-poo specimens and sediments from archaeological digs.

For the latter data set, there were 20 archaeological samples (13 paleofeces, four sediments, and three sediments taken from human pelvic bone) from 10 sites spanning time periods from the prehistoric era to the medieval era, 17 of which were newly sequenced. They got their modern fecal samples from a long-term Boston type 1 diabetes study, as well as from a broader study on the biodiversity of the human gut microbiome being conducted in villages in the West African Republic of Burkina Faso. According to the authors, “Feces were collected fresh and kept frozen until analysis.”

The researchers found that using the method, they were able to distinguish between fecal and non-faecal samples, as well as fecal samples from humans and dogs. “An unexpected finding of our study is the realization that the archaeological record is full of dog feces,” said study co-author Christina Warinner of the Max Planck Institute for the Science of Human History.

“An unexpected finding is the realization that the archaeological archive is full of dog feces.”

In particular, coproID correctly identified seven out of 13 samples of paleo-poo (five humans, two dogs) and marked the non-fecal sediments as “unknown.” Of the six fecal samples that the software failed to identify, three had insufficiently conserved microbiome components to make a determination. The other three uncertain samples came from a prehistoric archaeological site in the Rio Zape Valley in Durango, Mexico, and showed both high levels of canine DNA and microbiome profiles more typical of humans.

The Rio Zape samples “may have come from a human who ate a recent meal of dog meat,” the authors suggest. “Dogs were consumed in ancient Mesopotamia, but further research into the expected proportion of dietary DNA in human feces is needed to determine if this is a plausible explanation.” The alternative is that the samples came from dogs with a different microbiome profile than the microbiome data used in the study, derived from a single study of Labrador retrievers and beagles.

“Identifying human coprolites should be the first step for analysis of the ancient human microbiome,” said study co-author Maxime Borry. “With additional data on the gut metanomes of non-western rural dogs, we are better able to classify even older dog feces as in fact dogs, as opposed to ‘uncertain’.”