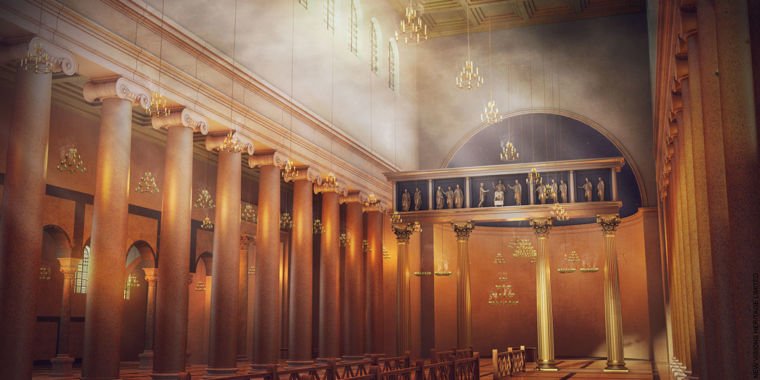 The Archbasilica of St. John Lateran doesn’t quite look its age. The basilica, where the Pope presides in his role as Archbishop of Rome, was already old when it was rebuilt in the 1650s. The walls still contain some of the original material used to build the cathedral under Emperor Constantine in 312 CE. And under the modern church is the original Roman foundation. Excavations since the 18th century have resulted in a network of dark, cramped spaces called scavi beneath the cathedral’s four-acre site.

Centuries of Roman history are buried in darkness in layers that extend up to 8.5 meters (27.89 feet) below the cathedral’s modern floor, and the underground archaeological sites are like a honeycomb through the city’s Caelian Hill . Now archaeologists have created a complete map of the site using a combination of laser scanning and ground radar.

Much of what is in the dig has been excavated and studied before, but co-director of the Lateran Project, Ian Haynes and his colleagues, say their work is the first detailed survey of the entire subterranean complex of ruins. They started mapping the exposed locations in the scavi in ​​2012 with laser scans. That work, now complete, will allow them to create a digital map of everything currently visible thanks to the ancient excavations.

However, quite a number of areas have not been excavated. To better understand what’s there, the archaeologists are surveying the area with ground radar to map layers of buried structures.

So far, that data has helped create a digital 3D reconstruction of what the basilica would have looked like in the 4e century. And Haynes and his colleagues are also trying to understand what it might have sounded like. Using the laser scans and information from previous excavations, they created a simple 3D model to reconstruct the acoustics of the original cathedral.

In 312 CE, the Caelian Hill overlooked most of the city of Rome. From that vantage point, a fortress called Castra Nova (the new fortress, though it was already a century old by then), the headquarters of the Imperial Horse Guard, dominated the Roman skyline. At the time, the four emperors of Rome – a ruling group called the Tetrarchy – fought among themselves for a greater share of Imperial power, and the Imperial Horse Guard unswervingly supported Emperor Maxentius.

In the Battle of Milvian Bridge in October 312, Emperor Constantine defeated Maxentius. Legend has it that the victory came after a vision urged Constantine to paint a Christian symbol on the shields of his soldiers. In the weeks following the battle, Constantine ordered the new fortress to be razed to the ground and the land given to the church.

For Constantine it must have been like killing two birds with one stone; he stripped his enemies of power and wealth from his enemies and gave them to his new religious allies. That moment marked a general shift in power in Rome toward religious institutions rather than the Roman army, as Constantine continued to consolidate the power of the Tetrarchy into his own hands.

Parts of the former fortress, including the headquarters and barracks, still lie beneath the modern cathedral, and archaeologists are studying how Roman architects incorporated elements of the fortress buildings into the construction of the new basilica.

Beneath the fortress are the remains of the palatial home of one of Rome’s elite families. One hundred years before Constantine, Emperor Septimius Severus had destroyed an entire neighborhood of such houses to build his new fortress – another power shift in the empire. Excavations have revealed intact frescoes of the walls of the ancient Roman house, along with the remains of a bath complex, oratory and market.

“To gain access to some of the spaces, we worked with a group called Roma Sotteranea, who specialize in working on buried sites and use the exact same equipment and techniques as speleologists,” Haynes said. Current World Archeology. “In some places it was necessary to rotate the teams every half hour because otherwise it just gets suffocating.”