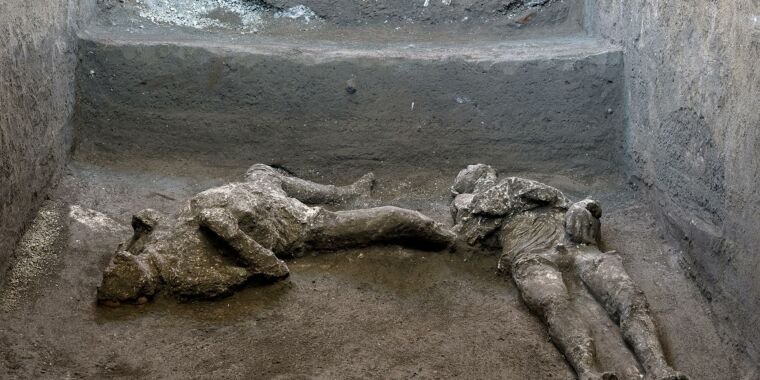 Archaeologists found the remains of two men lying in an underground chamber in a large villa on the outskirts of the Roman city of Pompeii, in southern Italy, Reuters reports. Based on the condition of their skeletons and evidence of preserved clothing marks, one appears to have been a wealthy individual in his thirties, while the other was likely a slave or laborer in his early twenties. They died together in Civita Giuliana’s villa, probably while trying to flee or seek better shelter from a dense, fast-moving cloud of superheated volcanic gas and ash.

The Rich Man and the Slave

The find brings the total number of human remains at Pompeii and Herculaneum (a few miles west along the Bay of Naples) to more than 1,500. Historians estimate that about 12,000 people lived in Pompeii and another 12,000 on the rich farmlands nearby, but we don’t know how many of those people died during the eruption or its aftermath.

And we know a surprising amount about those 1,500 people, because the thick layer of volcanic ash that buried them also preserved the details of their final moments, along with hints of the lives leading up to those moments. Like many of the other remains at Pompeii, the two men in the villa lay in soft volcanic ash, which hardened around them and retained the shape of their bodies long after their soft tissues had decayed. By making plaster casts from those impressions, archaeologists were able to see details such as facial expressions and even the folds and creases of clothing.

The younger man’s short life had been full of hard physical labor that had compressed his spine and no doubt caused him pain. Archaeologists assume he was a slave, as it is difficult to find any other explanation for a young manual laborer in a wealthy villa. The bones of his companion spoke of a life of good nourishment, and the bits of a finely made woolen cloak still under his neck marked him as a man of means.

But both were equally helpless as the torrent of gas and dust, called a pyroclastic flow, descended the slopes of Vesuvius. Their hands and feet are bent inward, suggesting they died in a sudden heat wave. Some models of the eruption predict that even in the coolest and most sheltered parts of Pompeii, the pyroclastic flow would have heated the air to boiling. Even in the heart of the villa, no one had survived.

A wave of death

The two men may have spent their last day thinking that the worst was over. The previous day, around 1:00 p.m., Vesuvius shot a dark, towering cloud of gas, ash and rocky debris more than 30 km (20 mi) into the sky. Pliny the Younger, who watched from Misenum on the other side of the Bay of Naples, later wrote that the cloud looked like a pine tree. Hot ash and chunks of porous rock called pumice rained down on Pompeii, Herculaneum and neighboring cities for hours before the cloud’s edges began to collapse under their own weight.

When that happened, the gas, dust, and rock fell to the ground, then rushed across the ground like a deadly pyroclastic flow—too hot and poisonous to survive, and too fast to outrun. It was a wave of death, and it engulfed the city of Herculaneum first in the wee hours of the morning. The two men in the villa on the outskirts of Pompeii couldn’t have known that, but they’d watched pumice and ash fall from the dark sky all day, all night, and the next morning.

By then, Vesuvius had shot another tower of ash and gas into the stratosphere. When that cloud collapsed, the pyroclastic flow reached all the way to Pompeii, killing everyone who remained in the city, including the two men in the villa. Later that day a second wave followed, but by then the rich man and the slave were already dead. In a nearby stable, three horses were harnessed far too late to escape; archaeologists unearthed their remains, armor and all, in 2017.

Archaeologists can learn more from the two men whose remains have lain in the ash-filled ruins for nearly 2,000 years. Further analysis could shed light on where they grew up, what they ate, and how they lived. And as archaeologists continue to excavate the rest of the villa, they can find clues as to who the two men were and how they fit into Civita Giuliana’s life.