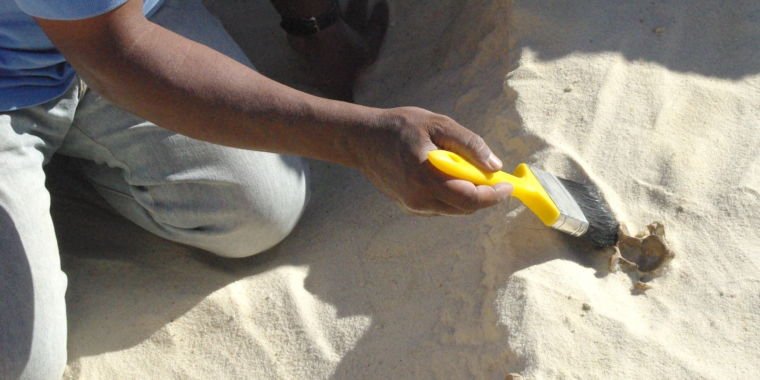 Stone tools unearthed in Saudi Arabia’s inhospitable Nefud Desert indicate that members of our genus Homo ventured beyond the familiar borders of Africa and the Levant sometime between 300,000 and 500,000 years ago. And according to climate data recorded in the bones of animals found at the site, the environment they ended up in may not have been all that different from the environment they left behind in East Africa. That could help anthropologists better understand the role of the environment — and its ability to adapt to challenging new landscapes — in shaping human evolution and global expansion.

The things they left behind

Archaeologist Patrick Roberts of the Max Planck Institute for the Science of Human History and his colleagues recently discovered a handful of stone tools in a layer of sand beneath the dry tracks of a shallow Pleistocene lake at Ti’s al Ghadah, in the Nefud Desert to the north. from Saudi Arabia. Dating back to between 300,000 and 500,000 years ago, the soil layer also contained fossilized remains of grazing animals, waterfowl, and predators such as hyenas and jaguars. Many of the bones appear to bear the marks of being slaughtered by tool-wielding humanoids.

Archaeologists had found other fossils at the site with possible cutting marks, but without stone tools, it’s difficult to determine whether an indentation in a fossil rib there was made by a human hand and not by some other predator or natural process. The tools—six sharp brown chert flakes and a scraper—make a much clearer case. Roberts and his colleagues say they are the oldest radiometrically dated hominid artifacts on the Arabian Peninsula, surpassing the previous competitor by 100,000 years.

The flakes show signs of being knocked out of a prepared stone core, which is a fairly advanced technique usually attributed to modern humans or Neanderthals. But Roberts says 300,000 to 500,000 years ago the toolmakers were more likely members of earlier hominids such as homo erectus (the earliest modern human fossils found in Africa date from only 200,000 years ago). Ancient environmental records in the bones that lay next to the long-discarded tools suggest that the Nefud was a very different place at the time.

When Arabia was green

Our species were not the first hominids to enter Europe and Asia. When modern humans began to spread slowly around the world sometime before 100,000 years ago, they encountered other members of the genus Homo who had ventured much earlier, starting with homo erectus about 1.9 million years ago. Some paleoanthropologists, including Roberts and his colleagues, say our predecessors stuck to familiar patchwork of grasslands and trees, located near lakes or rivers, while modern humans had a unique talent for adapting to a wide variety of extremes. environments, from deserts to tropical forests to the cold of Siberia. But others have pointed to the widespread distribution of certain extinct groups as evidence that they were, in fact, as flexible as we are.

To settle that debate, scientists need to understand what the environment looked like hundreds of thousands of years ago, during the Middle Pleistocene. The fossilized animals at Ti’s al Ghadah may have something to say on this subject, as the proportions of certain isotopes in their tooth enamel preserve information about the plants they ate and the climate in which they grew. Roberts and his colleagues used those chemical signatures to reconstruct an ancient environment surprisingly similar to the humid savanna of modern East Africa.

Photosynthesis does not work in exactly the same way for all plants. Most trees, herbs, shrubs and shade tolerant grasses store carbon through one chemical pathway called C3, while most grasses and sedges use a different pathway called C4. Each method results in a different ratio of the isotope carbon-13 to other stable isotopes of carbon in the tissues of plants, and those ratios are passed on to animals that graze on the plants. In Ti’s al Ghadah, tooth enamel from 21 fossilized herbivores of different species contained carbon-13 ratios that matched almost exactly a diet of C4 grasses. This suggests a large strip of open grassland around the shores of the disappeared shallow lake.

That’s a very different landscape from today’s reddish sand dunes, and the ratios of oxygen-18 to other oxygen isotopes in the tooth enamel of the Ti’s al Ghadah fossils suggest a much wetter climate in the Nefud from 300,000 years ago. Oxygen-18 is slightly heavier than other oxygen isotopes, so when water evaporates, more oxygen-18 is left behind. Ratios of oxygen-18 can reveal information about a complex array of factors, including temperature, humidity and the source of rainfall. And at Ti’s al Ghadah, those proportions suggest an environment very much like a humid savanna.

Those ratios are consistent with climate models that suggest a wetter, more hospitable environment in Arabia, thanks to a shift in the African monsoons during periods of warmer global climate called interglacials. They also help to understand the collection of animals at the site: elephants, oryx, hartebeest and others that would have thrived in a savanna. That means the Middle Pleistocene pioneers would not have faced the challenge of adapting to life in today’s hot, arid desert during the early waves of migration from Africa.

And that, according to Roberts and his colleagues, means that homo erectus and other Middle Pleistocene hominins would not have needed much adaptability to live in the Arabian Peninsula. Instead, our relatives — and possibly early members of our own species — seem to have expanded into an Arabian peninsula temporarily filled with hospitable grasslands. They did so with other species, whose fossil record clearly shows that they moved into Eurasia around the time of the Tis al Ghadah finds.

Modern people who came later did not have it so easy. “While the data isn’t quite there yet, later migrations of our own species to the Arabian Peninsula appear to be associated with drier conditions,” Roberts told Ars Technica. Modern people should also take advantage of more humid periods to move to the Arabian Peninsula. But according to Roberts and his colleagues, our species managed to push further into more challenging territory, “penetrating the dune fields and living under conditions that were perhaps more severe than their Middle Pleistocene predecessors.”

Ancient climate records — etched into sediments at the bottom of lakes and into layers of mineral deposits in caves — suggest that the Arabian Peninsula enjoyed several phases of milder, wetter climate over two million years of human-like movements through the region. But in between those phases, the region dried up and the desert closed in again.

“Between these phases, I think it’s clear that the Arabian Peninsula would have looked something like it does today, and that the existence of hominids in most of the interior would have been impossible,” Roberts told reporters. Ars Technica. “Indeed, this is why we end up with fossil assemblages like the one we have here, presumably the product of a downturn in climate and the demise of the local population.” That means migration of humanoids, from homo erectus until gay sapiens, through the geographical crossroads of the Arabian Peninsula probably happened in a series of pulses.

But understanding that process in detail requires better data on legacy environments. A big question, Roberts says, is how “green” the Arabian Peninsula actually was during its more hospitable phases. New core samples from lake sediments in the region could help answer those and other questions, as Ti’s al Ghadah provides another piece of that puzzle.

“Actually, we want to emphasize that early fossil finds must be accompanied by detailed environmental information,” Roberts told Ars Technica. “When we talk about migrations, this is perhaps the most interesting part in terms of studying the challenges and capabilities of different populations.”