Archaeologists Discover the Largest and Oldest Maya Monument Ever | Techilink 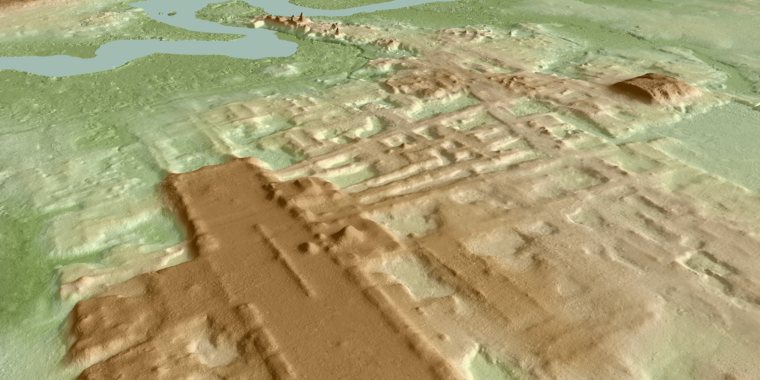 The Mayan culture has built city-states in Mexico, Guatemala, and Belize for centuries, but we are only beginning to realize how extensive the Mayan civilization was and how drastically Mayan farmers and engineers reworked the Mesoamerican landscape. In recent years, lidar surveys have revealed an ancient landscape previously hidden under vegetation and features too large-scale to recognize from the ground. Aguada Fenix, a newly discovered monument site, is the latest.

“A horizontal structure on this scale is difficult to spot from the ground,” University of Arizona archaeologist Takeshi Inomata and his colleagues wrote. The earthen platform is 1.4 kilometers long and 10 to 15 meters high, with elevated earthen roads connecting it to groups of smaller platforms nearby. Based on excavations at the site, it served as a ceremonial center for the Maya.

Inomata further explained: “This area is developed – it’s not the jungle; people live there, but this site was not known because it is so flat and huge. It looks like a natural landscape. But with lidar it appears as a very well planned form.” The team first noticed the platform in a series of low-resolution lidar images collected by the Mexican government, and they followed up with higher-resolution surveys and then excavations at the site.

That lidar study found 21 other monumental platforms, clustered into groups in the region. But Aguada Fenix ​​is ​​by far the largest — in fact, it’s the largest Mayan structure archaeologists have ever found. It took between 3.2 million and 4.3 million cubic meters (113 million to 151 million cubic feet) of clay and soil to build the platform. That’s a larger volume than the famous pyramids built centuries later during what’s known as the Maya Classic Period.

It’s also much older than any other Maya monument, old enough to suggest that the Maya began collaborating on massive building projects much earlier than modern archaeologists had previously suspected. According to radiocarbon dating of charcoal fragments mixed with the layers of dirt that make up the platform, humans began building Aguada Fenix ​​around 1000 BCE (although Inomata and his colleagues cannot rule out the idea that construction may have started even earlier).

Neolithic Revolution in the New World

That came as a surprise, because most of the evidence to date seems to say that around 1000 BC of years earlier. They also began to use pottery. The whole process was much like what archaeologists studying other parts of the world call the Neolithic Revolution — except the Maya had been growing maize for millennia before they decided to settle down and make it a whole lifestyle.

As far as we could tell, it took a few more centuries, until about 350 BCE, for those early Mayan villages to coalesce into the great city-states of the Classic Period. These were political, economic and ceremonial centers that dominated the surrounding farmland and smaller communities, ruled by elite classes and boasting tall pyramids. Before that, nobody had managed to organize enough labor and resources to build monuments in the Maya Lowlands – or so we thought.

Aguada Fenix ​​tells a different story. Before construction began, people had lived on the property for a while; Inomata and his colleagues found pottery, bones and shells on the rise of bedrock beneath the earthen platform itself, dating to between 1250 and 1050 BCE. Around 1000 BCE they had started the first construction phase.

“Clay and other soils of different colors were placed in multiple layers, with each layer forming checkerboard-like horizontal patterns,” the archaeologists wrote. The folks at Aguada Fenix ​​repeated that process at least once over the next 200 years to build the platform to its final height. Construction had stopped around 800 BCE and by 750 BCE the site appears to have been abandoned. Evidence suggests that small groups of people returned a few times over the next few centuries, but nothing beats the monument’s heyday.

In other words, the Maya at Aguada Fenix ​​were able to organize major monument building projects long before the pyramid construction of the Classic Period. They clearly had the manpower (at least 10 million man-days, Inomata and his colleagues estimate), the organization and the resources to make it happen. But they may not have had the social and political hierarchy that would later build the pyramids.

Aguada Fenix ​​is ​​on the far western edge of the area known as the Maya Lowlands, but it’s also very close to the homeland of the Olmecs, who built very similar earthen platforms – and later pyramids – in the centuries before the rise of Maya civilization. Based on radiocarbon dating, Aguada Fenix ​​is ​​roughly the same age as several major Olmec sites. But while Olmec sites often have massive stone sculptures of rulers, Aguada Fenix ​​does not.

That may mean that around 1000 to 800 BCE, the Olmec communities were much more hierarchical than the Mayan communities. If Inomata and his colleagues are right, it could also mean that the Maya organized their earliest and largest monument projects in common; they suggest the massive construction may have been a way of coping with the changes that came with getting used to village life.

“Under rapidly changing social conditions, many residents of the region may have actively participated… to create new meeting places without coercion from powerful elites,” they wrote.

On the other hand, Inomata and his colleagues found no traces of real living spaces, such as smaller platforms where people would have built their homes, at Aguada Fenix. This may mean that the people who built the monument at that time led a more mobile life. But they still came together to move millions of cubic meters of earth to build a huge platform.