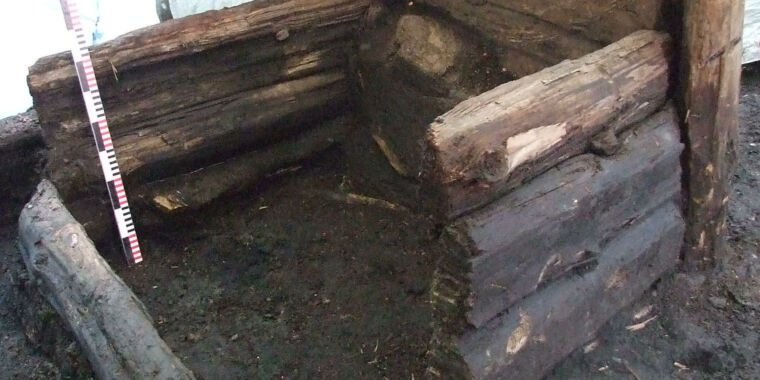 One of the things archeology consistently teaches us is that humanity is remarkably resilient in times of crisis. Another is that poop is forever. Archaeologists have already examined the contents of coprolites and the chemicals left behind by a city’s human waste. And according to a recent study, DNA from your gut microbes can linger for centuries under the right conditions.

Archaeogeneticist Susanna Sabin and her colleagues found DNA from human gut microbes in samples from a 600-year-old household cesspool in Jerusalem and a 700-year-old public toilet in Riga, Latvia. Ultimately, those data will help researchers penetrate the depths of medieval microbiomes to understand how the microscopic populations of our gut have evolved over the centuries. For now, the study offers some small hints about medieval life and suggests that old toilets have more to tell us.

We already know that the microbiomes of modern hunter-gatherers and modern urban dwellers look very different. Figuring out how those differences evolved could provide some insight into health problems in modern city dwellers. Sabin and her colleagues thought medieval latrines might be a good place to look for clues, since medieval cities were urban but not yet industrialized. They sequenced DNA in sediment samples from a 15th-century cesspool in Jerusalem and a 14th-century public latrine in Riga.

“We believed that the medieval period was old enough to detect change compared to modern populations, but not so old that the DNA would not survive well enough to conduct the study,” archaeologist Piers Mitchell of the University of Cambridge , a co-author of the study, told Ars. “We chose the two sites in Jerusalem and Riga because they were both from the same time period, but from different geographic regions, which could lead to different microbiomes in those populations.”

It turned out that the microbiomes in medieval sewage had some species in common with the guts of modern hunter-gatherers and others had in common with modern city dwellers. That combination meant that gut microbe counts from medieval Jerusalem and Riga were more similar than any modern gut microbiome.

For example, bacteria called Alitipes putredinis and Eubacterium rectale appear in the guts of most modern people, but those two kinds were “notable absences” in medieval latrines. On the other hand, both medieval latrines contain another common modern gut bacteria, Ruminococcus bromii†

But the two medieval cities also had their own specific microbial signatures. “We also found different species of parasites at the two sites. Fish tapeworm, for example, was very common in Riga, but was only occasionally found in Jerusalem,” Mitchell told Ars. “This reflects the abundant lakes and rivers full of freshwater fish in Latvia and the fewer sources of freshwater in Israel and Palestine.”

A tale of two cities

“Both latrines harbored diverse microbial taxa, some of which were found in the industrial gut datasets we used for comparison,” molecular paleoanthropologist Kirsten Bos, of the Max Planck Institute for the Science of Human History, told Ars. For example, both medieval cesspools were crawling with the DNA of bacteria in the genus Bifidobacteriumthat today also live in the guts of most people in the industrialized countries.

Modern hunter-gatherers usually do not have populations of Bifidobacterium, although. But they tend to house other bacteria called Treponema, which “appear to have been lost in industrialized populations,” Sabin and her colleagues wrote. And the medieval cesspools of Jerusalem and Riga were overflowing Treponema species too.

“This indicates that the medieval gut contents appeared to contain characteristics of both “industrialized societies and hunter-gatherers,” Bos told Ars. If you were to look at a count of the microbiome of a single modern person, you would find: Treponema and Bifidobacterium in the same digestive tract would seem like a huge contradiction. As the study puts it, they are “often seen as a compromise between more industrialized and more hunter-gatherer-based dietary habits.”

The thing about cesspools and public latrines, of course, is that they collect fecal samples from a lot of people. In Riga, the latrine Sabin and her colleagues sampled had been a public facility near a busy street.

What does it mean?

“It is thought that the general population of the city used this latrine,” Mitchell told Ars. “We assume it was used by the poor who did not have their own latrine and by people from a social class who needed the toilet while they were in town for their daily work.” Tree rings of a wooden structure surrounding the remains of the latrine from 1356 CE.

That’s a great place to get information about a community’s entire population, but it also makes the mix of microbial DNA buried in the mud difficult to interpret centuries later. Perhaps the people of Riga had different dietary habits and microbiomes, which is why their public latrine contains evidence of microbes that don’t usually share an intestinal tract. But it could also be that medieval cities like Riga were halfway through the industrial and hunter-gatherer gut flora, and the latrine is a snapshot of that transition.

In Jerusalem, the samples came from the bottom of a cesspool that had once emptied the toilets of at least two households in the Old City’s Christian Quarter. Material from the cesspool radiocarbon dates back to the 1400s, but Sabin and her colleagues aren’t sure how many people used it. “We don’t know how many people lived in the houses that shared the Jerusalem latrine, as those houses no longer exist,” Mitchell told Ars.

We need to look at more toilets

“At first, we weren’t sure whether molecular features of gut contents would survive for hundreds of years in the latrines,” Bos said in a press release. “Many of our successes to date in recovering ancient bacteria have come from calcified tissues such as bone and tartar, which offer very different storage conditions.”

The next step is to collect metagenomic data from other medieval latrines in other cities. “Replicating similar studies with material from different locations and time periods can reveal important features of how the microbial communities in our guts have changed over time,” Bos told Ars.