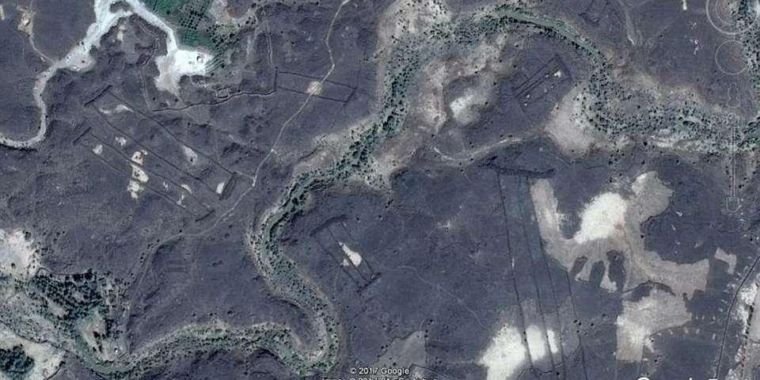 For nearly a century, aerial photographers have documented mysterious, millennia-old structures built from low stone walls in the rocky lava fields known as Hoera, in Syria, Jordan and Saudi Arabia. This desert area, dotted with volcanic hills, is almost devoid of life. But when viewed from above, the bare ground is covered in massive, interlocking geoglyphs that take the form of abstract arrow shapes called “kites” and rough rectangles called “gates.”

David Kennedy, an archaeologist from the University of Western Australia, became interested in the structures after discovering how easy they were to track with Google Earth. He had seen some of the kites while doing fieldwork in Jordan and realized the constructions were continuing as far as Saudi Arabia. “We would have loved to fly to Saudi Arabia to take pictures. But you never get permission,” he said The New York Times. “And then comes Google Earth.” Now Kennedy has a paper on the rectangular gate structures in an upcoming issue of Arab Archeology and Epigraphy.

Since 2004, a group of Saudi amateur archaeologists calling themselves The Desert Team (Fariq Al Sahra) has been exploring geoglyph sites on the ground. Neurologist Abdullah Al-Saeed, part of The Desert Team, told the Time that it wasn’t until 2008 that he viewed the sites with Google Earth and understood the significance of what they had discovered. He and his colleagues keep a detailed photographic record of the kites and gates on their website. They have found that most geoglyphs are made of relatively low stone walls, sometimes interrupted by circular “chambers” whose walls are higher. One hypothesis about the kites is that hunters herded animals into them for easy butchering, but the Desert Team notes that the walls would have been too low to contain the animals.

Kennedy believes the geoglyphs were built by nomads, perhaps the ancestors of Bedouins who live in the area today. They may be up to 9,000 years old, but further research is needed to determine the exact dates. What is clear is that they were built over centuries at a time when volcanoes were active in the region; some walls are covered with lava from eruptions after they are built. Most of the gates are made of walls that are about 150 to 500 feet long, with the longest stretching nearly 1,700 feet.

In his paper, Kennedy writes:

The lava fields are often rich in archaeological remains, suggesting a more humid past and more abundant vegetation, and recent field work identifying larger settlements supports this idea… As in Jordan’s much better researched lava field, there are many thousands of stone structures that collectively known to the Bedouin as the “works of the old men.”

In some ways, the gates and kites resemble the geoglyphs of Peru’s Nazca region, often referred to as the Nazca Lines. These pale lines were created by humans scraping through the dark surface layer of desert rock. From the air they look like large abstract designs and animals. No one knows for sure who made them, or why.

Neither the Desert Team nor Kennedy and his colleagues have any idea what the Hoera meaning geoglyphs. Kennedy does not think they were used as burial mounds or for hunting. They don’t seem like structures in which people could live. It is possible that they were purely symbolic, used in rituals whose meaning has been lost over time.