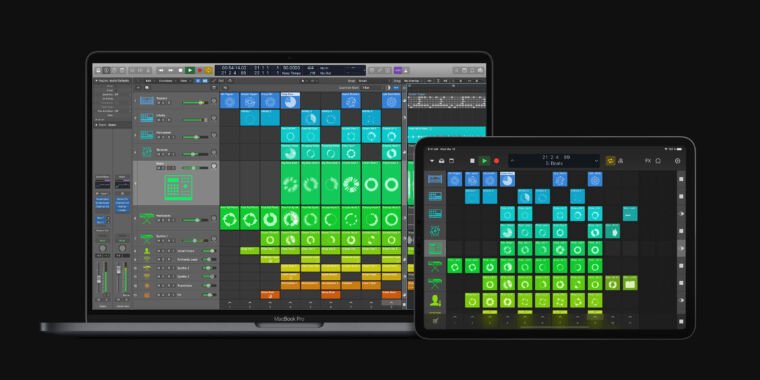 Apple today announced Logic Pro X 10.5, a major update to its popular digital audio workstation (DAW) for macOS. Major new features include a pro version of Live Loops, a new drum machine-style tool (Step Sequencer) for creating drum beats and other sounds, and some major updates to the Sampler tool.

Live Loops takes a page straight from DAW Ableton Live’s book and offers a grid-based approach to plotting loops and samples. Apple has also introduced a new feature called Remix FX that allows filters to be applied in a way suitable for live performance. Performing live is something that most music producers say competing DAW Ableton Live excels at, compared to Logic, so this reads like an attempt to close that gap.

The Sampler tool has been updated with a new interface and some minor new features. The company also offers Quick Sampler here, a tool that lets you grab audio samples from places like the Voice Memos app (and elsewhere) and turn them into playable instruments within Logic.

The new Step Sequencer is a tool “inspired by classic drum machine workflows”, but it’s not just for drum sounds. It allows you to adjust the speed, repeat, gate, skip, playback direction and randomization for the individual components of the composition you are working on.

Overall, Apple called it “the biggest update” since “Logic Pro X launched.” The new features appear to be intended to bolster Logic Pro X’s competition with other popular DAWs such as Ableton Live, which excels in live performance and electronic music production.

While Logic has sometimes lagged behind the competition in terms of some usage scenarios, Logic’s strengths have long been highly optimized for Mac performance, affordability, a strong user interface, and a particularly strong library of sounds and loops out of the box.

• Compose music by arranging and triggering cells in a grid using loops, samples and your recordings
• Implementing and recording ideas for free-form arrangements in the track area
• Add Remix FX to perform creative effects such as filters, gates, repeaters and bitcrusher
• Use Logic Remote on your iPad or iPhone to run Live Loops and Remix FX with Multi-Touch gestures to trigger multiple loops or effects at once

• Import a single audio file to instantly build a playable sample instrument
• Quick Sampler automatically identifies the root and optimal loop points and matches the tempo of your project
• Use Slice mode to chop a vocal or drum sample into multiple slices that can be triggered on a keyboard
• Record live samples using a microphone, external hardware, or from a track or bus

• Build your own beats, melodies and effect automation using an interface inspired by classic drum machine workflows
• Create and edit patterns with discrete control over speed, repetition, chance, offset, step speed, skip and tie for each row
• Use any patch as a sound source, including custom kits created with Quick Sampler and Drum Machine Designer
• Contains a library of over 150 rhythmic and melodic patterns