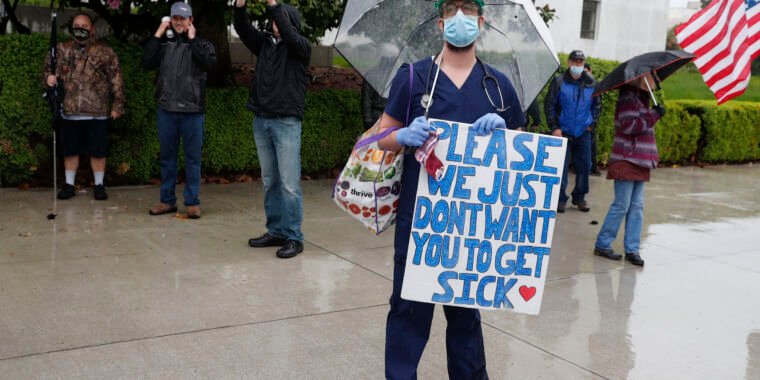 Prominent voices against vaccines have joined the clamor of those protesting social distancing measures during the COVID-19 pandemic, according to a report by The New York Times.

The merging moves have left some health experts worried that anti-vaccination sentiment could spread among the various factions protesting the mitigation efforts. Those factions include Tea Party activists, armed militia groups, protesters with Confederate flags and some business owners just wanting to reopen, according to experts who spoke to the Times.

“There is a tremendous amount of cross-fertilization of ideas as these factions get to know each other,” Devin Burghart, who leads the Institute for Research and Education on Human Rights, told the Times.

Anti-vaccination proponents see it differently, though, arguing that the groups already share a common motive. “From day 1, it has been difficult that we are always denounced as anti-vaccine, and these protests are denounced as anti-lockdown. We have always been concerned with freedom,” Heidi Muñoz Gleisner told the Times.

Muñoz Gleisner, along with the two other women, founded the Freedom Angels Foundation, which is best known in California for its opposition to vaccination requirements in the state in recent years. On Friday, Muñoz Gleisner co-organized a protest in Sacramento against the state’s stay-at-home ban, where she was arrested.

California Senator (and MD) Richard Pan, who has authored several pieces of pro-vaccine legislation in the state, noted that “these groups all ultimately have the same message: We want you to get sick.”

Health experts fear the spread of anti-vaccine ideas and conspiracy theories could thwart efforts to defeat COVID-19 if or if a vaccine for the devastating disease becomes available. While a majority of people in the United States support vaccination, having groups of people opposed to life-saving immunization can keep the virus circulating — as has been seen in recent years in measles and other vaccine-preventable diseases.