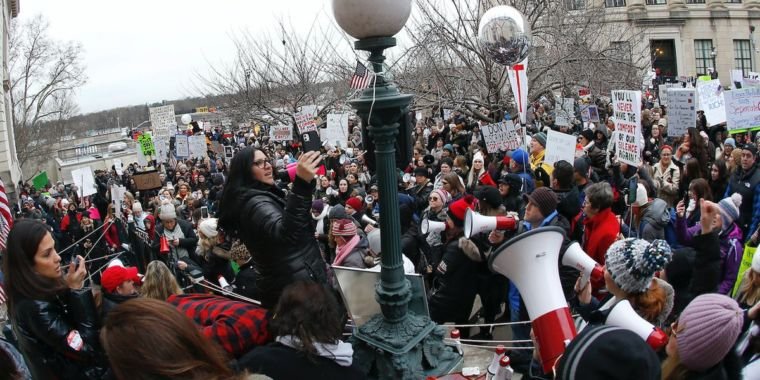 Amid outcry from hundreds of anti-vaccination advocates, New Jersey state lawmakers have abandoned legislation to ban vaccination waivers based on religious beliefs.

The bill, S2173, collapsed in the state Senate Monday, as lawmakers realized it was a single vote for passage, according to The New York Times. The defeat came after a last-ditch effort to amend beleaguered legislation, eventually sparking new opposition.

S2173 would have banned parents from using religious beliefs as an excuse to avoid standard life-saving vaccinations for their children. Instead, only children with medical conditions that prevent a child from being vaccinated — as outlined by the Centers for Disease Control and Prevention — would receive an waiver.

But the bill was met with strong protest from anti-vaccination advocates in the state, who gathered in the State House and disrupted legislative sessions. Last month, lawmakers postponed a vote on the measure amid deafening chants from protesters and waning support from senators.

In an effort to reinvigorate the bill, the sponsors amended it to apply only to public schools. But while they gained support from some senators, they lost others.

Monmouth County Republican Declan O’Scanlon said he would vote “yes” to the amended bill because it allowed private schools and daycare centers to accept unvaccinated children, according to NJ Advance Media. But others saw the amendment giving wealthy families — who can better afford private childcare and schools — the choice not to vaccinate, while lower-income families have no such option.

In addition, infectious disease expert David Cennimo of Rutgers New Jersey Medical School worried that the public version of the bill could lead to higher numbers of unvaccinated children in private schools where the disease could easily spread. “You may be clustering all these sensitive kids in the same place,” he told the Times.

As anti-vaccination protesters cheered S2173’s legislative defeat, the bill’s sponsors and supporters pledged to keep fighting and said they would immediately reintroduce a new version of the bill.

“We are ready to go to war on this,” Senate President Stephen Sweeney, D-Gloucester, told reporters Monday. “We will pass this bill. This is about public health. It’s about protecting people.”

In 2019, the country saw the largest outbreak of vaccine-preventable measles cases since 1992, with 1,282 cases in 31 states. Prior to the introduction of measles vaccines in the 1960s, an estimated 3 to 4 million people in the U.S. contracted the highly contagious viral disease each year, according to the CDC. This led to an estimated 400 to 500 deaths, 48,000 hospitalizations and 1,000 cases of measles-associated encephalitis (swelling of the brain) each year.