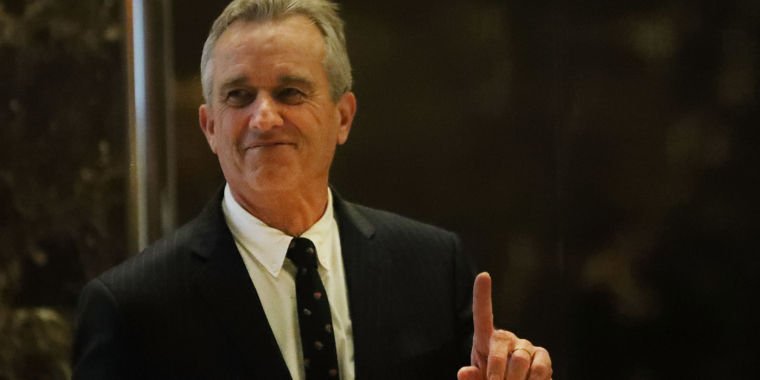 Children’s Health Defense alleges in its lawsuit (PDF) that Facebook, its CEO Mark Zuckerberg, and the organizations Science Feedback, Poynter and PolitiFact acted “together or in concert with federal government agencies” to infringe the rights of the first and fifth amendment by CHD. The lawsuit also alleges that Facebook and the fact-checking organizations colluded to commit wire fraud by “clearing the field” of vaccine ads.

Facebook has “treasonous conflicts with the pharmaceutical industry and its own health authorities,” CHD claimed in a press release. “Facebook is currently censoring Children’s Health Defense’s page aimed at purging factual information about vaccines, 5G and public health agencies.”

“This is a major First Amendment case testing the limits of government authority to openly censor unwelcome criticism of government policies and pharmaceutical and telecom products on private Internet platforms,” Kennedy added in a written statement.

Kennedy, through CHD and an affiliated group called the World Mercury Project, was responsible for more than half of the anti-vaccine ads on Facebook when they were allowed, researchers found last year. That ended in 2019 amid a measles outbreak, when Facebook updated its policies under pressure from the Centers for Disease Control and lawmakers.

Advertisements with false claims about vaccines have been banned, and pages and groups promoting misinformation about vaccines or hoaxes have disapproved of their content in searches and recommendations. Vaccine posts may also be subject to Facebook’s fact-checking process, and a link may be included to direct readers to informational sites such as the World Health Organization.

Facebook’s fact-checking actions both violate CHD’s rights and are defamatory, the group claims. The organization’s reputation “depends on the credibility of its science-based research papers,” CHD writes in the lawsuit, “which examine both known and currently unknown public health risks from vaccines and 5G and wireless technology.”

Essentially, the 115-page complaint argues that Facebook’s actions amount to censorship and defamation because CHD doesn’t like its content being referred to as misinformation.

Facebook “integrated WHO and CDC definitions of “vaccine hoax” into the algorithms and machine learning that they used to identify the content of CHD, which is often flagged just for being critical of those same agencies as “biased,” “untrustworthy” and “ outdated,” the suit laments, adding that Facebook and the fact-checkers colluded “to [CHD’s content] ‘False’ when critical of the safety of vaccines or 5G networks, bringing about this censorship through the shams of ‘content moderators’ and ‘independent fact-checkers’.”

These actions “have already injured CHD,” the suit claims, “and will have the effect of further injuries.” [CHD] due to its trading reputation and goodwill and that of [its] authors, diverting traffic from his site and further limiting revenue and donations.”

If Facebook’s actions did indeed decry CHD’s anti-vaccine content and divert attention, as the lawsuit alleges, then the systems are working exactly as intended. But CHD named a strong ally in its lawsuit against those systems: the White House.

In May, President Donald Trump signed an executive order to “prevent online censorship.” That order, while arguably completely unenforceable, calls on regulators to prevent social media companies, including Facebook, from working “to suppress views with which they disagree”.

There is only so much that one can ‘disagree’ with facts; the earth stays round (and the climate changes), whether you believe it or not. Historically, however, Facebook has had a very hard time walking that line and separating “fact” from “opinion” in its fact-checking process, especially when someone with a public shout out “bias.”

For example, in July, reporters found that Facebook categorized climate change denials based on false claims as “opinion” and exempted it from the fact-checking process, though staff agreed it was partially false.

CHD argued in the lawsuit that its anti-vaccine content should also be treated as opinion, as should climate change denial. “By using Facebook’s pre-populated options to mislabel [CHD’s] articles and videos, Science Feedback and Facebook are deliberately telling the public that the plaintiff is presenting false information when they know that the information presented is at best an opinion and not false facts,” CHD claimed.