Another COVID-19 Reinfection: This Time The Second Infection Was More Serious | Techilink 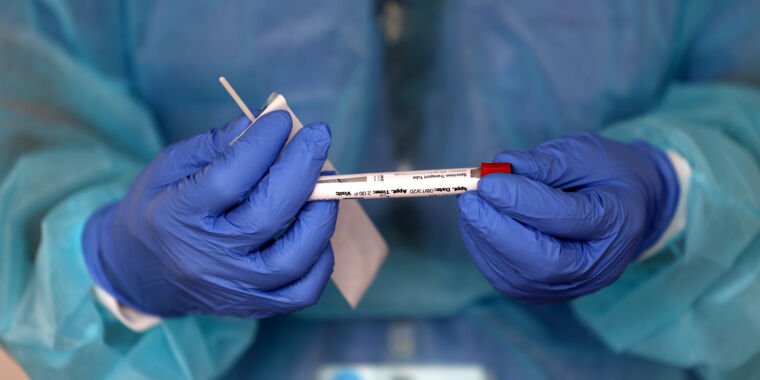 A 25-year-old resident of Reno, Nevada, was infected with the pandemic coronavirus, SARS-CoV-2, twice about 48 days apart, with the second infection causing a more serious case of COVID-19 than the first and hospitalization and need oxygen support.

That’s according to a draft study, led by researchers at the University of Nevada and posted online. The study has not been published by a scientific journal and has not been peer-reviewed. Still, it quickly caught the attention of researchers, who earlier this week examined data from the first confirmed case of a SARS-CoV-2 reinfection.

SARS-CoV-2 reinfections aren’t surprising—or even necessarily worrisome. From person to person, immune responses to an infection develop along a spectrum, with some people developing robust, protective responses and leaving others with weaker responses. Amid the more than 24.5 million cases worldwide, it is fully expected to find some recovered patients who are not fully protected by their immune response and thus vulnerable to reinfection.

The big question is: how often does this scenario happen? Researchers still don’t know. This case may well represent a very rare event, but there are many huge questions about SARS-CoV-2 immune responses that researchers are rushing to understand. Why do some people develop a more serious illness than others? For those who recover, what levels of immune responses will protect them from another infection? How many of the recovered will develop those protective responses? And how long do those protective reactions last?

All we can say from these reports is that reinfection is possible – at least for some individuals. Again, this is not surprising, but it is difficult to prove. Like the report earlier this week, the Nevada researchers turned to whole-genome sequencing as proof that their patient did indeed have two different infections.

In particular, the researchers decoded the entire SARS-CoV-2 genetic material collected from nasal swabs taken during the first and second illness. The researchers found that viruses present in the patient’s nose during the two illnesses showed many small differences in their codes. The first virus had four code variations that were missing from the second — and the second virus had seven variations that were missing from the first. Although small genetic changes naturally accumulate in viruses over time, the researchers calculated that if the two diseases had actually been caused by the same virus, the virus in this one patient should have evolved more than 3.6 times faster than the virus. had previously been documented. In addition, four of the changes observed between the two viruses could only be explained by genetic “reversions,” and the odds of them occurring are “disappearingly small,” the authors say.

But beyond the genetic evidence suggesting two different infections, there is always the question of whether there was a mix-up with the samples. That is, perhaps the patient didn’t have the different virus strains plucked out of their noses; maybe the swabs were just mislabeled or mishandled in the lab. To allay these concerns, the researchers performed genetic forensics on the fluid in which the swabs were kept and interim sample preparations. The researchers found that all of the human-derived material that was scraped off and associated with the nasal swabs belonged to the same person.

While the researchers convincingly claim that their patient has in fact been infected twice, critical data on the patient’s immune responses is lacking. Most notably, the researchers did not test for antibodies after the person’s first infection in April, which was characterized by a sore throat, cough, headache, nausea and diarrhea. So while the data so far suggests that most people develop antibodies that can help protect against SARS-CoV-2 after infection, the researchers don’t know whether this patient did or not. However, they note that the patient was not immunocompromised and did not appear to have a condition that made reinfection seem more likely.

In the first report of a reinfection in a man from Hong Kong, researchers tested for antibodies some time after the patient’s initial infection, but they found none. While this indicates that the person may not have developed antibodies (which could explain the reinfection), the researchers say they would need more testing at different times to definitely show a lack of antibodies after the initial infection. Importantly, the Hong Kong patient’s second bout of COVID-19 was asymptomatic, suggesting that he had some protective immune responses.

The patient from Nevada wasn’t so lucky. In the second infection, which started in late May, the patient developed shortness of breath and coughing. Lung scans later showed signs of atypical pneumonia. The person was hospitalized and required ongoing oxygen support. In early June, the patient tested positive for SARS-CoV-2 antibodies, but the researchers did not scrutinize the types of antibodies.

All in all, this case, like the first, leaves all the big questions unanswered. As a Yale . Immunology Expert Akiko Iwasaki in summary“This case highlights the need for further research into the range of outcomes of re-infection from COVID19. As more and more cases of reinfection will be reported, we need to get a better idea of ​​how well the immune system protects against disease after natural infection.”