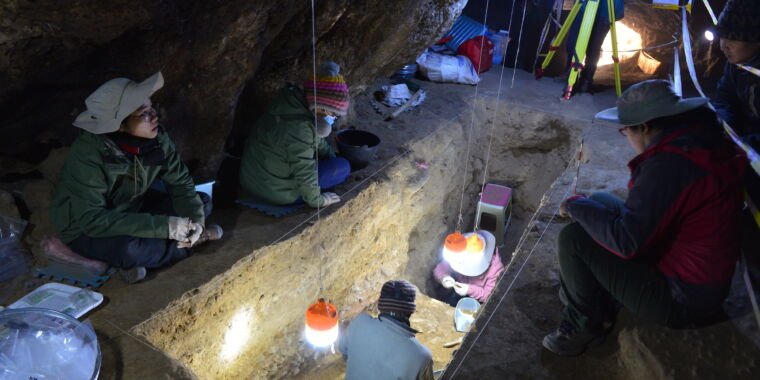 The Denisovans occupy a very strange place in the history of mankind. Like the Neanderthals, they are an early branch of the lineage that spawned modern humans and later mixed with modern humans. But we knew about Neanderthals for about 150 years before we had some of their DNA sequence and identified a set of anatomical features that defined them. In contrast, we had no idea Denisovans existed until their DNA unexpectedly showed up in a single tiny piece of finger. And to this day, we haven’t identified enough remains to really say anything about what they looked like.

But over time, we’ve gotten more and more ancient DNA samples that provide a clearer picture of our interactions with this enigmatic lineage. Now, two new reports describe ancient DNA giving a little more detail. An article describes a modern human genome from Asia dating back closer to the time when crossing must have occurred. It provides further evidence that there were at least two cases of interbreeding, and it helps clarify how early human populations moved across Asia. The second confirms that Denisovans lived along the Tibetan plateau and may have adapted to high altitudes.

In 2006, mining operations in Mongolia’s Salkhit Valley revealed the top of a skull that was clearly old. But because it had no definitive features, people argued over whether it could be Neanderthal or… homo erectus† Preliminary DNA sequencing, however, indicated that it belonged to a modern human, with radiocarbon dating placing its age at about 34,000 years old.

That is actually a critical period in human history. At that time, there were several East Asian and East Eurasian (or Siberian) populations, the latter being somewhat related to West Eurasians. Their history is phenomenally complicated. A 40,000-year-old skeleton from near Beijing is clearly the closest to modern East Asians, but is most closely related to a skeleton found in Belgium (!??!?). A 45,000-year-old Siberian skeleton appears to have no modern relatives, while a 24,000-year-old individual from the same region identified with the population that mixed with East Asians to spawn the ancestry of Native Americans. But two other Siberian skeletons from about the same period don’t show that affinity and just look generically Eurasian.

If you’re not confused after that, go back and read it again.

Given that mess, any further DNA from that time and area could be useful. So the researchers did what has become standard procedure for dealing with this ancient DNA. They first looked for sequences that matched human DNA to extract all the human-like sequences. To eliminate contamination from modern humans, they then looked for signs of the most common damage that occurs as DNA ages. Anything clearly human and damaged was used to put together a genome.

The end result was about what you would expect, given the age of the skull top. Most of the variations in DNA matched that of modern humans, but there were some regions that matched Neanderthals and Denisovans. The modern human parts most closely resembled the East Eurasian and Amerindian populations, confirming the earlier results.

But it’s still almost as confusing as before. “The [newly described] Salkhit individual shares the same number of alleles with the Tianyuan [Beijing] individually as in the ~31,000-year-old Yana individuals from northeastern Siberia,” the researchers write, “but the Tianyuan and Yana individuals share fewer alleles with each other than with the Salkhit individual.” Overall, the researchers conclude. that, some time after West and East Eurasian populations separated, there was some interbreeding between East Eurasians and East Asians.

But of course the newly described Siberian DNA bears a remarkable resemblance to the skeleton from Belgium, suggesting that at least some West Eurasian DNA was brought back into the lineage.

The other old ones

As for Neanderthals, the new Siberian skeleton is quite typical of modern Asian populations, with about 1.7 percent of the DNA coming from Neanderthals. Denisovan content is more difficult to assess, but the researchers discovered 18 large pieces of DNA inherited from Denisovans. The size of these led researchers to conclude that the crossing had occurred about 10,000 years earlier. That corresponds to the complete absence of Denisovan DNA in the 45,000-year-old Siberian skeleton. And the Denisovan DNA present is more consistent with the amount found in later East Asian skeletons.

An interesting point is that the segments present in the new Salkhit genome do not overlap with the segments found in the genomes of modern humans in Southeast Asia and the Pacific. The obvious conclusion from this is that modern humans mingled with Denisovans on at least two separate occasions. That’s something indicated by other results, but modern East Asians have DNA from both events. The Salkhit genome creates a clear separation between them.

Meanwhile, a separate newspaper is looking at where the Denisovans lived, specifically in Baishiya Karst cave on the edge of the Tibetan plateau. At over 3,000 meters (nearly 11,000 feet) above sea level, this was a very high area, where it would have been difficult to get home during the last ice age. However, part of a jawbone had been found there. Although it did not yield any DNA, protein fragments indicated that the jaw belonged to a Denisovan.

Most ancient DNA samples are heavily contaminated with bacteria, with heavily damaged and fragmented DNA. As a result, researchers have developed several procedures to help them separate human DNA and then recognize ancient DNA based on the pattern of damage it accumulates. Gradually, it has come to realize that the same techniques can work even where the contamination is higher and human sequence even rarer: soil samples. So while we couldn’t get DNA from the jawbone, a team decided there might be some left in the environment it came from.

So the team dug through the sediments at the bottom of the cave and dated several layers to create an approximate chronology. Most of the layers had mammalian DNA which, based on the damage, was quite old. So the researchers pulled out the human mitochondrial DNA and started sequencing it. It was clearly Denisovan, with a slim chance of a tiny fraction of modern human DNA.

In general, there are signs of Denisovan occupation from over 100,000 years ago to as recent as about 30,000 years ago. That’s an extensive history of occupation, although we can’t know if it was constant, seasonal, or sporadic. Either way, 70,000 years is certainly enough time, the researchers point out, to adapt to the high altitude. And that appears to be consistent with another genetic finding: that some of the Tibetan’s genetic adaptations to high altitudes are inherited from Denisovans.