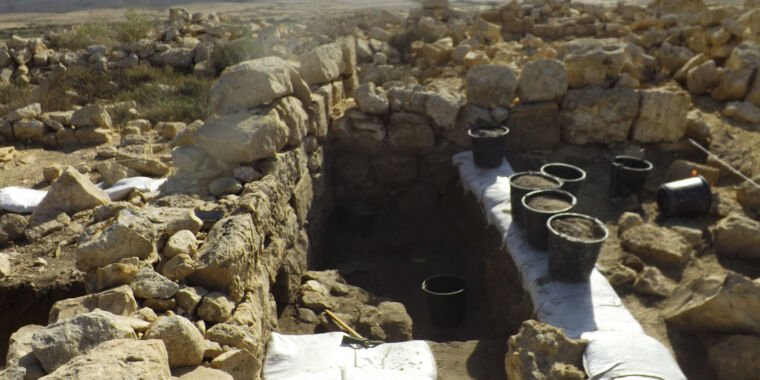 Ancient heaps of waste recently provided some clues as to how the Plague of Justinian, part of a one-two punch of volcanic climate devastation, devastated commercial agriculture on the fringes of the Byzantine Empire in the 540s CE. They tell us a lot about the ancient Byzantine world, but they also suggest how archaeologists may one day unearth the story of the COVID-19 pandemic from the layers of stuff we’ll be dumping in landfills in 2020.

For thousands of years, people in Israel’s arid Negev highlands have survived by growing enough grain to feed their families and enough grapes to make their own wine. But under the Byzantine Empire (which emerged in AD 330 as a successor to the Roman Empire), the Negev flourished. Cities sprang up in the desert, fueled by a new export trade: grapes for the famous Gaza wine, a sweet white wine that ancient chroniclers raved about and in demand from Britain to Yemen.

The wine from Gaza linked the remote Negev to the international Mediterranean economy, turning scattered small subsistence farms into larger commercial enterprises supplied with irrigation systems and pigeon droppings. For a few centuries, the citizens of the Byzantine Empire paid well for a steady stream of Gaza wine, and the empire built monasteries and sent religious pilgrimages to the Levant.

In 11 garbage heaps from the ancient cities of Elusa, Shivta and Nessana, archaeologist Daniel Fuks of Bar-Ilan University and his colleagues found more than 10,000 grape, wheat and barley seeds, radioactively dating them to predict the growth of commercial wine production. follow. — and its collapse in the wake of the plague.

Grapes have always been a staple around the Mediterranean, along with grains and olives. But in the 300s AD, grapes started to account for a larger proportion of the seeds thrown away in garbage dumps. By the mid-500s CE, grape seeds accounted for a quarter to nearly a half of the seeds in waste heaps; that suggests that farmers who once grew a mixture of grain and grapes to feed their families had begun to expand their vineyards to produce more grapes for wine export.

Broken pieces of pottery mixed with those layers of the rubbish heaps tell the same story. Wine from the Gaza Strip made its way from the wineries to the port of Gaza on a camelback, then around the rest of the Mediterranean world (and beyond) in the holds of ships. The jars of the sweet white wine were distinctive: tall, narrow, with tapered bottoms that made it easier to lash them onto a camel’s back or stack them in a ship’s hold. As grape seeds became more common in heaps of waste in the Negev, so did broken fragments of wine jars from Gaza.

“This industry grew from practically nothing in the third century CE to considerable production in the 5th century,” Fuks and his colleagues wrote.

And then the bottom of the wine trade in Gaza fell. The towns of the Negev were largely deserted and within a few centuries most people had returned to small settlements and subsistence farming. Grape seeds accounted for only 5 to 14 percent of the seeds in waste heaps.

The Plague of Justinian

According to radiocarbon dating of seeds and other organic material from the ancient waste heaps, the crash of the Negev wine industry coincided with the aftermath of the Plague of Justinian: the bubonic plague’s first known visit to Europe, in 541 CE. The first wave of the plague killed 20 percent of Constantinople’s population. Infection also devastated Alexandria’s trading port. Over the next 160 years, wave after wave of plague carried off perhaps half the population of the Byzantine Empire.

“Religious texts from the time suggest a heartfelt doomsday scenario,” Fuks and his colleagues wrote. In the Byzantine Empire, many people were focused on survival.

Along with a smaller percentage of grape seeds, Fuks and his colleagues found fewer shards from Gaza wine jars in waste layers from the mid-500s AD. Combined, those things indicate a sudden slump in the wine trade in Gaza. Evidence of the garbage dump matches other archaeological records from around the same time: people stopped building irrigation dams, closed the pigeon houses where pigeons expel fertilizer for the fields, and even gave up organized garbage collection in the cities.

There is no evidence that the plague traveled as far as the Negev highlands, although historical sources describe outbreaks not too far away in southern Palestine. Instead, Fuks and his colleagues suggest that events hundreds of miles away actually killed the Negev grape industry. Growing cash crops for the international market had brought prosperity to the Negev, but also made local farmers vulnerable to events in places like Constantinople and Alexandria.

Driven by economic forces, the Negev farmers had pushed the land to the limits of its carrying capacity with irrigation systems and fertilizers. When the plague wiped out the market for wine from Gaza, farmers could not afford to maintain the irrigation dams and canals that kept the entire commercial farming system operating at high input, high output. And the intense focus on a single crop—grapes for winemaking—made local farmers in the Negev even more vulnerable, as it was more difficult to adapt to changes in the market or the weather.

While the Plague of Justinian has undoubtedly been the final blow to the Negev grape industry, the story isn’t quite so simple. As we have seen in 2020, political tensions, climate change and other events will not stop even before a pandemic. And just like today, those events and their impact influenced each other in complex ways.

“Indirect social factors — whether they are the result of plague and climate change or an adjunct to them — may have had significant economic impacts on the viability of Negev viticulture,” Fuks and his colleagues wrote.

The Sassanid dynasty in Persia began to overwhelm Justinian’s borders in 540, sacking Antioch and other Byzantine cities. Those raids marked the beginning of 20 years of conflict – skirmishes with the Persians in the east and costly wars with the Goths in Italy, where Justinian tried to recapture Rome. The Byzantine historian Procopius writes that Justinian heavily taxed agricultural products to finance his wars of reconquest.

And probably the climate also played a role. The plague came right on the heels of two volcanic eruptions in the late 530s CE, which blasted ash high into Earth’s atmosphere and triggered a decades-long cold spell called the Late Antique Little Ice Age. In Europe, the late-Antique Little Ice Age brought cooling and drought, but paleoenvironmental evidence in the Negev suggests the volcanic disturbance may have caused more rainfall — which may have led to flash floods that wreaked havoc on irrigation systems intended to drain the flow. store and manage rainwater.

Meanwhile, if Justinian’s plague struck the Negev itself, the resulting labor shortage would have made it impossible to repair irrigation systems, spread fertilizer on the fields or harvest the grapes.

The Archeology of Pandemics

With the Plague of Justinian in mind, it’s interesting to think about how future archaeologists might use today’s landfills to study the effects of COVID-19. Archaeologists can study modern heaps of waste using the same methods they use to study ancient ones, and garbology (the archaeological study of waste) has been a busy field for decades. In layers dating back to 2020, researchers may notice a sharp increase in food delivery containers, hand sanitizer bottles and disposable masks, but they may also notice trends and lines of evidence that we don’t even think about today.

And just like archaeologists studying how the Plague of Justinian affected the ancient wine trade, archaeologists studying the early 21st century are likely to conclude that our society was affected not only by COVID-19, but also by global climate change and a complex tangle. of social and political events. However, unlike the Byzantine grape farmers of the Negev, we still have a chance to shape what kind of story future archaeologists will read in our landfills.

“The difference is that the Byzantines didn’t see it coming. We can actually prepare for the next outbreak or the impending impacts of climate change,” Fuks said. “The question is, will we be wise enough to do that?”