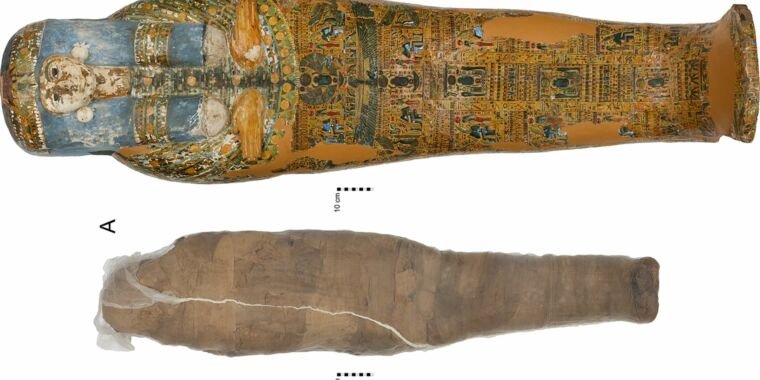 About 3,200 years ago in Egypt, ancient embalmers encased a mummy in dried mud to repair damage done by careless grave robbers. Archaeologists recently used a CT scanner to unravel part of the dead’s story. The study, published in the journal PLOS ONE, revealed an unknown mummification technique, along with a strange story of grave robbery, family devotion and mistaken identity.

The person, now known only as NMR.27.3, died relatively young. The name of the deceased has been lost to history and their gender is debatable (more on that later). After death, grave robbers broke into their tombs at least twice, and now archaeologists have pieced together some fragments of the story — mostly the post-mortem chapters.

What remains is a rare glimpse of life and death in ancient Egypt. The anonymous mummified person reveals that even years after death, living relatives still cared enough about the deceased to actually have the corpse repaired (sort of) after grave robbers damaged it. And to repair the mummy, ancient embalmers plastered mud over the linen sheaths to help the body maintain its shape, a technique modern archaeologists have never seen before.

In the CT scan, Macquarie University archaeologists Karin Sowada and her colleagues were able to see that several bones, including the left knee and the bones of the lower leg, were broken after the person died; bone breaks differently after death, when dry and brittle, than during life. Although the bones were broken, some even falling apart, the linen wraps directly over the fractures were neat and untouched, and the thin layer of dried mud had not cracked. That suggests the embalmers repackaged the mummy after the damage was done.

An eventful life after death

For ancient Egyptians, the whole point of mummification was to preserve the corpse for all eternity as a vessel for the person’s soul (at least one part of the soul, if we’re technical), without which the deceased could not survive in life after death. No pressure or anything.

Pharaohs Seti I (1323-1279 BCE) and Amenhotep III (1411-1353 BCE) both underwent repacking and repacking long after their deaths — more than once before Seti I. But pharaohs usually had elaborate mortuary temples with priests keeping their tombs closely guarded for centuries. keep an eye on.

For anyone who was not the earthly incarnation of a god, living relatives probably only checked the grave and made sacrifices for a few generations at most. But apparently, “They, or others associated with the deceased, cared enough for the latter’s posthumous well-being to later invest in a mud-plastered and painted shield after the body had been disturbed and dismembered,” Sowada and her colleagues wrote. .

We don’t know the name of this person, but the remains offer silent proof of how seriously their family took their beliefs about the afterlife and duty to your ancestors. The remains’ postmortem misadventures also remind us that grave-robbing was an ancient profession.

How to fix a broken mummy?

To repair the damage done during the heist, the embalmers rewound the linen sheaths and plastered a thin layer of mud over the cloth to create a protective shell around the damaged mummy. When it dried, the mud helped hold the broken limbs in place and maintain the shape of an intact body. Add a few more layers of linen over the mud bowl, and hey, the deceased is as good as new and ready to move on to the afterlife.

Archaeologists had never seen this technique before, which caught Sowada’s attention when she first noticed the thin layer of mud during a CT scan session in 1999. Twenty years later, improvements in CT scanning technology allowed Sowada and her colleagues to get a more detailed look. . The resolution of the recent scan allowed the archaeologists to distinguish between individual layers of linen and between linen and the painted mud shell. The results confirmed that they were looking at a mummification trick that no one had seen in thousands of years.

The basic mechanics of mummification haven’t changed much over the millennia: remove the sticky parts, dry out the body, apply preservatives, and wrap the body in linen to help preserve it. But as with any technology and/or cultural practice, the details evolved over time, and they also varied depending on where you lived and how wealthy and important you were.

around 21st Dynasty (1294 to 945 BCE), some royal mummies contained a layer of linen soaked in resin, which dried to a hard shell. Seti I and his son Rameses II both received this treatment. Sowada and her colleagues suggest that the painted layer of mud could be an attempt by a wealthy but non-blue-blooded person to copy high society. But if it does, it’s hard to see why embalmers would save it for the repair attempt. Perhaps they remembered the resin technique and thought, “Something that dries to a hard shell would be perfect for this post-mortem restoration, but what’s astronomically less expensive than resin?”

It’s also possible that encasing mummies in mud was a standard practice for some time, at least for some social classes. Archaeologists don’t have enough information to know yet, but Sowada and her colleagues suspect that NMR.27.3 wasn’t the only mummified person to receive this treatment, just the first one archaeologists noticed.

“Understanding how common this practice had become in the late New Kingdom requires the radiological study and publication of further non-royal mummified individuals from this era,” Sowada and her colleagues wrote.

A stranger in the lady’s coffin

However, one thing is certain: NMR.27.3 Surely was not a New Kingdom noblewoman named Meruah, who died about 1000 BCE. Her names and titles are painted on the lid of the wooden box, but the mummified body inside is not really Meruah. Radiocarbon dating and the style of the scenes painted on the coffin suggest she died sometime between 945 and 1040 BCE. On the other hand, a radiocarbon dating of the mummy’s linen sheaths suggests that the person… inside the coffin died sometime between 1207 and 1113 BCE. Meruah probably wasn’t even born yet.

Archaeologists will probably never find Meruah’s body, but they’re pretty sure how a stranger ended up in her coffin: colonialism.

Sometime in the past, looters likely broke into Meruah’s tomb and stole her coffin. Later – much later – shady 19e Antiquities dealers of the last century decided they could charge more for the beautiful coffin if it had a mummy in it, so they found one. And apparently they were right, as a wealthy British tourist named Sir Charles Nicholson bought the coffin from Meruah and its unknown occupant during a trip to Egypt in 1856.

Even basic questions are sometimes complicated

The person now occupying Meruah’s chest may or may not have been a woman. Several years ago, DNA sequence from the remains suggested the person was genetically male, but Sowada and her colleagues say that in their CT scans, the person’s pelvis, skull and lower jaw look more like a woman’s bones.

“We assume that the differences in the results of the skeletal study and the aDNA result stem from a problem with the aDNA study,” Sowada told Ars. “Without further investigation, we assume that the problem has to do with contamination at some point in the process.”

The painted mud itself only adds to the uncertainty. Sowada and her colleagues examined fragments of the mud shell using X-ray fluorescence and Raman spectroscopy — both techniques that measure a sample’s chemical makeup based on how the molecules reflect light or X-rays. It turns out to be a fine-grained brown clay, covered with a white calcite pigment and then painted red.

Although the mud covers the mummified person’s entire body, the samples Sowada and her colleagues examined came close to the head; a colleague of Sowada carefully removed three small fragments in 1999. Sowada and her colleagues do not yet know whether the rest of the shell has also been painted. “I’m interested to know if the whole shield is painted and even decorated; we will have to wait for further improvements in imaging technologies to answer this question,” Sowada told Ars.

From the 19e to the 21st Dynasty – around the time NMR.27.3 died – Egyptian artists tended to paint men with reddish faces and women with yellow faces. That’s just the way things were done, and Egyptian art was usually very conventional and stylized. Death masks and coffins followed the tradition, with men’s faces being painted in reddish pigments like those on the NMR.27.3 scale.

But in Thebes, near present-day Luxor, archaeologists have found some examples of women depicted with darker reddish-brown skin. Since Meruah’s coffin is Theban-style, and Nicholson bought the coffin and the mummified person in it from Luxor, the red pigment could also mark the deceased as a woman. After all, conventions change depending on where and when you are.