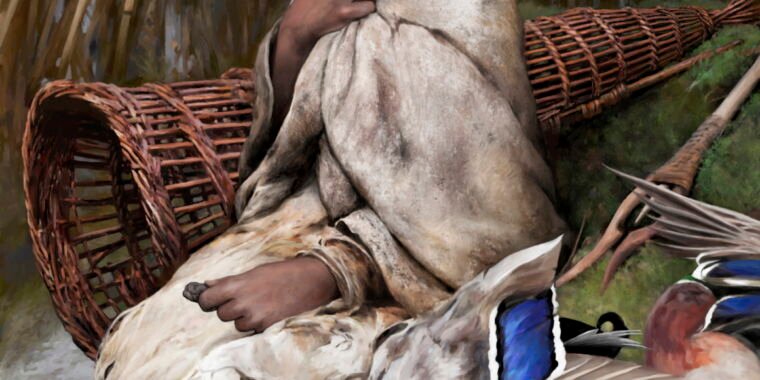 5,700 years ago, a woman in present-day Denmark chewed on a lump of birch bark pitch for a while and then dropped it. Millennia later, the DNA she left behind reveals her entire genome, a count of the bacteria living in her mouth, and a few hints about a recent meal.

If you’re a hunter-gatherer who needs to grab a stone tool, birch bark pitch is a handy glue, but you may need to chew it to make it pliable enough to work with. Pitch is waterproof and contains an antiseptic called betulin, so it’s great at preserving DNA. Archaeologists in Scandinavia have found even more human DNA in bits of chewed pitch than in skeletons (which is relatively rare in prehistoric Scandinavian sites we’ve studied so far).

But this is the first time researchers have succeeded in sequencing an ancient person’s entire genome from a clump of chewed pitch. Only about a third of the sampled DNA bioarchaeologist Hannes Schroeder of the University of Copenhagen was human; the other 68 percent came from the old wives’ microbiome and traces of a prehistoric meal. This single discarded piece of old chewing gum tells us that the old woman, whom Schroeder and his colleagues named Lola, was likely lactose intolerant, ate duck and hazelnuts, and may have recently had pneumonia. She also had blue eyes, dark brown hair and dark skin.

“This combination of physical traits has been previously noted in other European hunter-gatherers, suggesting that this phenotype was widespread in Mesolithic Europe and that the adaptive spread of light skin pigmentation in European populations did not occur until later in prehistoric times,” wrote Schroeder and his colleagues. colleagues. †

She lived through the Neolithic Revolution

The detail we can extract with DNA turns a seriously unappealing artifact into a deeply personal link to life in the past. It also sheds light on the much larger cultural upheaval that reshaped Lola’s world. While Lola was eating hazelnuts in the prehistoric settlement now called Syltholm, people from southwest Asia spread west across Europe, bringing with them a new way of life: agriculture.

Around the time Lola lived in Denmark, the hunter-gatherer culture called Erlebolle gave way to the Funnel Beaker culture, a way of life based on agriculture and livestock. We know from archaeological records that cultural changes in Denmark took place very quickly, with people’s settlement patterns and ways of earning a living changing almost overnight. But what we don’t know is whether it’s because new people have moved in, driving the old hunter-gatherers from Erlebolle, or whether the people already living in Denmark have adopted new ideas.

Lola’s genome suggests she is not related to the Neolithic farmers who moved west. And that means the newcomers didn’t immediately replace or absorb the hunter-gatherers who had lived in Denmark since the end of the Ice Age. In Lola’s time, it seemed that at least some of the old hunter-gatherer groups still existed, even though they had adopted new ways of life. That ties in well with other genomic evidence from elsewhere in Europe, but it’s important not to draw firm conclusions based on a single genome.

Duck and hazelnut were on the menu

But what was Lola’s life like during this time of cultural change? A small percentage of the DNA in the field came from other things she’d recently chewed: hazelnut and some sort of mallard duck, bits of which must have been in her mouth when she picked up the field. That may be a more detailed picture than you wanted, but it suggests that even after Lola’s community started farming, they still relied on wild foods. Duck bones and hazelnuts at the site support the DNA evidence.

Lola’s genome also contained alleles commonly associated with the inability to produce lactase — an enzyme important in digesting milk — as an adult. If lactose intolerance was still common among people in Scandinavia just after the Neolithic Revolution (the wave of migration and cultural change that introduced agriculture to most of Europe), Europeans probably developed the ability to milk as adults relatively recently. to drink, after dairy farming a common way of life. DNA evidence from other sites also supports that idea.

A Neolithic case of pneumonia?

Most of the DNA recovered from the lump of pitch belonged to bacteria and viruses. In other locations, archaeologists have learned about ancient microbiomes from DNA and proteins preserved in calculus-hardened dental plaque that still clings to the teeth of ancient skeletal remains. But calculus is a long-term account of the tiny organisms that live in your mouth; the DNA Lola left in her chewing gum looks more like a snapshot.

Overall, Lola’s oral microbiome looked a lot like modern ones (there are whole datasets of oral microbiomes for comparison). Aside from a few bacteria associated with periodontitis, the microbes in Lola’s mouth were harmless, and are still the case for modern humans. Schroeder and his colleagues did find some genetic sequences of the Epstein-Barr virus, something Lola would have in common with about 90 percent of adults in the world today. It is likely that the virus never made her sick; most people get it as children and never experience symptoms (sometimes the Epstein-Barr virus can cause a severe fever or increase the risk of Hodgkin lymphoma and some autoimmune diseases later in life).

Lola may have been recovering from pneumonia the day she chewed the birch bark, because genetic sequences of the bacterium Streptococcus pneumoniae appeared in her microbiome. Schroeder and his colleagues found several sets of genes called virulence factors, traits linked to the pathogen’s ability to infect a host and thwart the immune system.† s. pneumonia has a knack for picking up virulence factors from other related bacteria, so ancient DNA could help researchers trace its evolutionary history.

Tips about an even older past

Lola’s genome also tells archaeologists about the first humans to move into Scandinavia after the ice sheets retreated between 12,000 and 11,000 years ago, generations before she lived on Syltholm.

Based on other archaeological and genetic evidence, we know that after the ice retreat, people from different parts of Eurasia moved into Scandinavia along two routes. Some hunter-gatherers from mainland Europe moved north through Denmark, while others moved south along the coast of Norway from further northeast. Lola is much more closely related to the group from mainland Europe – in fact, her genome contains no traces of ancestors of the second group at all.

As always, we need more data, but for now, researchers have something to chew on.