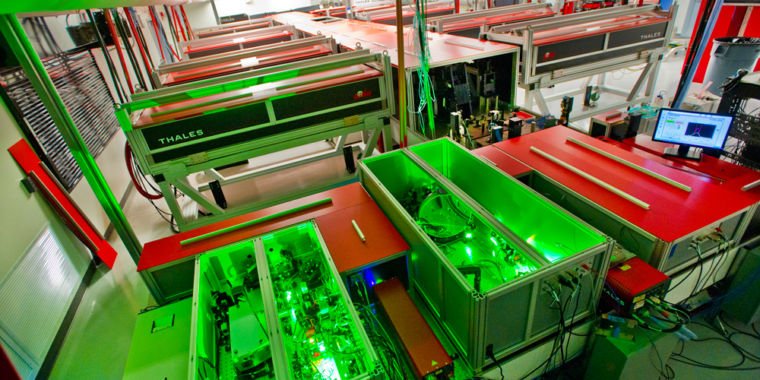 In the dark and distant past I called myself a laser physicist. I would speak with pride of lasers producing incredible power: the thought of a petawatt laser system would bring a tear to my remaining eye.

But I have to admit that our best hardware is relatively weak compared to natural energy sources that provide much more power. Of course, it is very difficult to convince a neutron star to sit in the lab and not destroy the planet. But now, from the minds of theorists and in a laboratory hopefully not too close to you, we may have a chance to match astronomical radiation sources at the touch of a button.

Our petawatt laser systems collect many photons (about 1018 of them) and then release them all at once (in about 10-15 s) to make one. By comparison, a simple nuclear decay can release a photon that’s damn close to the same force. If you could convince all the nuclei in a nanogram of material to decay at the same time, you’d hit the same power stream.

Of course, nuclei don’t pay much attention to each other, so they’re hard to coordinate. In addition, you are ultimately limited to the range of energy produced by the physics of radioactive decay. If you want higher energy gamma rays, then again you need a neutron star that shakes living daylight out of the nearest electrons. These high-energy electrons then produce gamma rays.

However, it turns out that we do similar things all the time. Many facilities around the world, including the LHC’s predecessor, accelerate electrons. Some of these electrons hit very high energies. But we don’t use any of them to produce gamma rays. So, what’s a physicist supposed to do to get some gamma rays?

Bring me one thickets laser

With the advent of oversized lasers, new ways to accelerate electrons became available. Instead of sending a single laser pulse into a material and accelerating the electrons by dragging them along with the light, you can trap electrons in a focal point. The idea is to send 12 laser beams to one focal point. Six beams form a cone of light approaching from the left, and the remaining six form a cone approaching from the right. Together, these meet in the middle to create a high-intensity spot. For various reasons, an electron that is close will move to the brightest part of the spot and begin to oscillate back and forth along the axis of the two cones.

The movement of the electrons results in some high-energy photons, but no gamma rays. To make matters worse, the trap isn’t very good, so electrons are flung away quickly. So you get a short burst of disappointing X-rays, and then it’s all over.

If you turn up the laser power even more, space-time will start hating your laser. The intensity is so great that electrons and their antiparticle, positrons, are produced from the vacuum. These are oppositely charged, so they go in different directions in response to the local field. This has two effects: first, it replenishes the electrons in the trap, and second, it amplifies the field.

The first part is good. You have to have charged particles in the trap to produce radiation at all. But when the field gets stronger, it’s like the universe decides it’s on your side for once. As the field strength increases, the electrons oscillate even more violently, increasing the energy of the photons they emit. And due to the increased field strength, pairs of electrons and positrons are formed even faster. So while the laser pulse is on, it becomes a self-amplifying effect.

gamma ray laser? To check. Bring on the mutants

Out of that hot mess comes a focused blast of gamma rays with low-end energies of 10 mega-electron volts, which is about twice the energy you get from radioactive decay. On the high side, it reaches a few GeV, ranges normally produced by astronomical events. The researchers predict that, depending on the photon energy, a 40 petawatt laser would produce 108 photons in 10-15s. This would produce a gamma-ray beam with laser-like properties and a power of 40 terawatts.

Even more amazingly, this sort of thing can be done in the (huge) basement of your local physics building, as long as they line the walls with lead bricks. So yes, it’s a facility-sized laser, but not like a synchrotron or a nuclear reactor, which needs an entire campus to itself.

The eternal question: what is it good for? No idea, but I’ll take two.