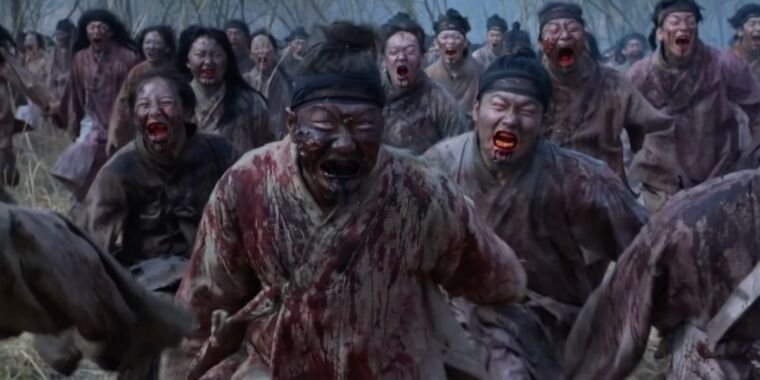 It’s been a little over a year since the South Korean zombie era drama Kingdom surprised us with its masterful mix of horror, history, martial arts and political intrigue. That all-too-short first season ended on a nail-biting cliffhanger, and we’re finally about to learn what happens next, as Netflix just released an action-packed trailer for the second season.

(Some spoilers for S1 below.)

The series is based on a popular South Korean webcomic Kingdom of the Gods by Kim Eun-hee, who also edited it for television. Set in the Joseon period in Korea, a medieval dynasty that lasted some 500 years (1392-1897), Kingdom begins when the current king has succumbed to smallpox. His conspiring young wife, Queen Cho (Kim Hye-jun), and her family have kept him alive artificially – via a “resurrection plant” that turns the king into a flesh-eating zombie – until her son is born. Her son would inherit the throne over the current Crown Prince, Lee Chang (Ju Ji-hoon), who was born to a concubine.

Of course, the king’s “torment” soon spreads to the outer provinces. The exiled Crown Prince teams up with a nurse, Seo-bi (Bae Doo-na), and other survivors to beat back the advancing zombie horde. When we last left them, they were in grave danger, outnumbered as a massive army of the voracious undead advanced. And Queen Cho had given birth and seized the throne in the absence of Lee Chang.

Kingdom turned out to be an intoxicating, addictive delight, easily earning a spot on our 2019 annual list. “The production values ​​are stunning, bringing the historical period to life in great detail,” I wrote in my review last year. “Suddenly it’s a juggernaut, with lots of swordplay, suspense and hints of comic relief.”

Netflix Korea released five ultra-short teasers for the upcoming season in December, but this new trailer is the first in-depth look we’ve had. According to the official premise, “As winter approaches, the battle between the living and the undead in Joseon is just beginning. The royal court is swarming with snakes, the zombies are coming and the crown prince has a nation to save. The worst is is yet to come, and everyone will have to pick sides without knowing who they can really trust.”

The trailer offers a lot of action against zombies, albeit with few details about the storyline of the upcoming second season. We do learn that zombies evolve. They used to mysteriously fall asleep in dark nooks and crannies when the sun came up, but apparently not anymore. And we know from S1 that there is a master in a remote village who may know the secret to ending the plague. We bet this will be an important subplot in the future, as there’s a short shot of a mysterious flower – the ‘resurrection plant’, or perhaps the cure?

Queen Cho is still on the throne, although it appears that the palace is also fighting zombies. (It’s Ground Zero before the outbreak, after all.) We see Lee Chang arrive at the palace and confront her with sword drawn: “The throne is not yours.” She only offers a contemptuous smile. Most intriguing of all, we are told, “There is still one who has committed a mortal sin and deserves to die.” Could it be the Queen’s father, Cho Hak-ju, who is the head of the Haewon Cho clan? Or maybe Lee Chang will have to confront (and possibly kill) his own zombified father, in the tradition of all good tragedies.