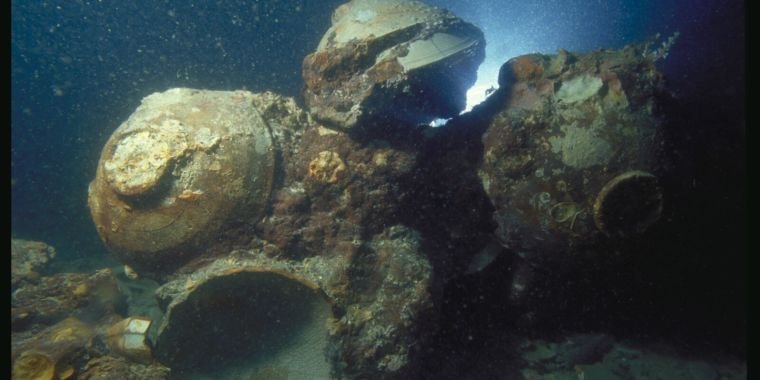 In the 1980s, fishermen working off the coast of Indonesia made a surprising catch: a cargo of ceramic vessels, elephant tusks, fragrant resin and other artifacts from a ship that had lain at the bottom of the Java Sea for centuries. Most of the ship’s hull was long gone; wood decays quickly in hot water, leaving behind only the former contents.

A closer look at the cargo reveals that the ship may have gone to the bottom a century earlier than archaeologists first suspected, putting it right in the middle of a very interesting period in Chinese history.

May you live in interesting times

The Song Dynasty (1127-1279) was the pinnacle of ceramic exports in China, when the Imperial Court encouraged overseas trade. Ships crossing the seas began to connect more directly between distant trading partners than the ancient Silk Road could allow. The Srivijaya Empire, a formidable naval power based in Sumatra, was in decline and other coastal powers in the region vied for its former supremacy.

And in the midst of it all, a merchant ship laden with ceramics and luxury goods went down off the coast of Indonesia. According to a label on the bottom of a ceramic box that was part of the doomed ship’s final cargo, the ceramic was made in a town called Jianning Fu. But the city was only called that from 1162 to 1278, the year the Mongol conquerors gave it a slight rebrand to Jianning Lu.

Jianning Fu meant that the city was the capital of a fu, or prefecture, a level of government that is larger than a province but smaller than a province. When the Mongols invaded during the Yuan Dynasty, they restructured the old three-level administrative system, and the city formerly known as Jianning Fu became the capital of a larger unit of several prefectures called a lu. This forced the residents to change their addresses to Jianning Lu, which must have cost a fortune to print new address labels. (Today is the city of Jian’ou, in Fujian province.)

Since it’s unlikely that a trader would have left a cargo of expensive ceramics for several years, let alone decades, the city was probably still Jianning Fu when the cargo left port. That means the ship probably met its fate sometime between 1162 and 1278.

That’s at odds with the results of a 1997 radiocarbon dating on a single resin sample from the wreck, suggesting that the wreck was lost sometime after the mid 1200s. Still, researchers at the time noted that “several finer wares suggested an earlier date” based on subtle stylistic elements.

Radiocarbon dating techniques have become much more accurate in the 20 to 30 years since that test. Field Museum archaeologist Lisa Niziolek says that when other evidence suggests the dates might be a little off (as is the case here), it’s worth retesting with more samples and current techniques. The team used accelerator mass spectrometry (AMS), which is more sensitive and accurate than conventional methods, to test several samples of elephant tusks and resin.

“The technique chosen really depends on the amount of material available for dating and the budget,” explains Niziolek. “Conventional dating is less expensive than AMS dating, but requires a larger sample size and takes longer.”

The new AMS dates ranged from 889 to 1261, but most were in the 10th to 12th centuries. That’s quite broad, but it includes the range of dates suggested by the inscriptions, supporting the idea that the wreck dates back to when the ancient Jianning was named Lu Jianning Fu.

The discovery did not happen in a single “Eureka!” moment. Half of the castaways had been in the Field Museum’s collection since 1998, when it was donated by Pacific Sea Resources, which salvaged the wreck in the early 1990s. Private profit-driven companies are normally disastrous for shipwrecks, but in this case Niziolek says things could have been much worse.

“Pacific Sea Resources worked with an underwater archaeologist to map the site and document the locations of recovered artifacts,” Niziolek told Ars. “The company did not sell the collection for a profit, but gave it to the museum for research and educational purposes.”

That is often not the case when private companies get their hands on shipwrecks; usually they are just looking for treasures to sell for a profit, and they don’t care what they destroy in the process. That has actually made determining the dates for several major Asian shipwrecks difficult.

The shipwreck in the Java Sea had been looted for more than a decade before Pacific resources reached it, and the nearby dynamite fishery had also damaged parts of the site. But Pacific Sea Resources has recovered a large collection of artifacts, with enough documentation of their positions and context to make the artifacts useful for research. Half of the material went to the Indonesian government under a licensing agreement and the other half went to the Field Museum.

“The collection was essentially orphaned in the late 1990s, and The Field was one of the few institutions that had the resources to adequately house, inventory, and research a collection of this size, which required as much effort as this one, Niziolek said.

No one at Pacific Sea Resources could have translated the inscriptions on various ceramic artifacts, but in 2012, then-summer interns Amanda Respess and Maura Condon took on the project.

“Two of the pieces they examined had the same long inscription on their base. Although the archaeological report yielded some translations, Amanda, one of the co-authors of this paper, was able to identify the characters that the salvage team was unable to identify,” Niziolek said. They identified a place name: Jianning Fu.

A year later, study co-author Lu Zhang did more research and found that Jianning Fu was a fairly short-lived name.

Only two of the shipwreck’s ceramic pieces bear the Jianning Fu inscription, but many others have inscriptions or markings that can tell archaeologists more about the origin of the ship’s cargo. “Many of these are surnames, which may be related to the family who owned the workshop where the pieces were produced. Other markings, such as numbers or abstract lines, could be merchant marks used by merchants to identify their goods,” Niziolek said. “This is an area that we are exploring further and plan to publish on.”