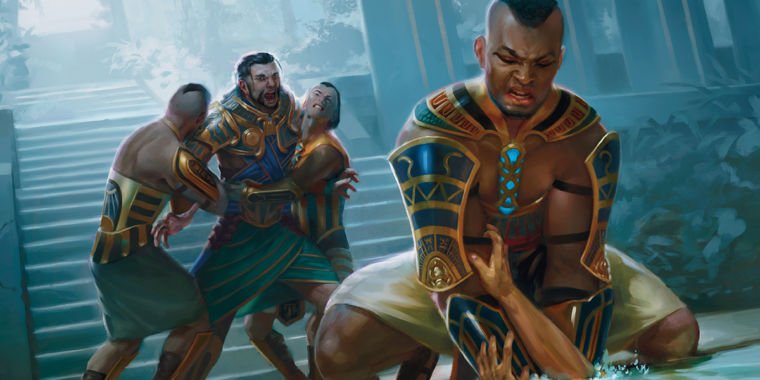 Magic: the meeting has the colorful, rebellious world of kaladesh and arrived in the dark, foreboding, Egyptian-themed plane of amonket. The title expansion set contains 264 maps – and we have one of those new maps to show you today: Story Spotlight map Cruel reality.

The final victory is the theme of the day as Cruel Reality drops: force your opponent to say goodbye to his least favorite friend every turn. This kind of effect is painfully slow, but repeating each turn is powerful – the longer the fight lasts, the more your opponent’s resources diminish, until they run out and slowly lose the game.

Since this is a Story Spotlight (pinch the text at the bottom of the card), Cruel Reality shows us a tantalizing hint of the plot arc in amonket, with Gideon beginning to discover some of the morbid secrets behind the gleaming city. From the other spoilers we’ve seen so far, it looks like the glorious death (and reincarnation?) is a big part of airplane culture, leaving the mood a lot darker than the recently colorful kaladesh and sets up for the “Gatewatch vs. a Certain Elder Dragon” conflict.

This card sees the return of the “Curse” card type – a mummy’s curse is a classic figure of speech in Egyptian mythology – suggesting we’ll see a few more ways to destroy your opponent in amonket. Seven mana is a tricky question, so this isn’t a card we expect to break into the more streamlined, competitive formats, but it’s is a map appealing to those of us who like to see our opponents squirm.

amonket will be released worldwide on April 28, with prerelease events the weekend before (April 22-23). The Magic store locator can help you find a store near you that is hosting an event.

We will have a full review of the expansion before release. If you haven’t played Magic: the meeting Before or you are an expired player from your teens and you are interested in playing the game, our past coverage is a good place to start.

Did you know that Ars Technica now has a weekly newsletter? It includes all of the week’s top stories, plus information about upcoming meetings and other events. Sign up now.

Listing image by ©2017 Wizards of the Coast LLC in the US and other countries. Illustration by Kieran Yanner.