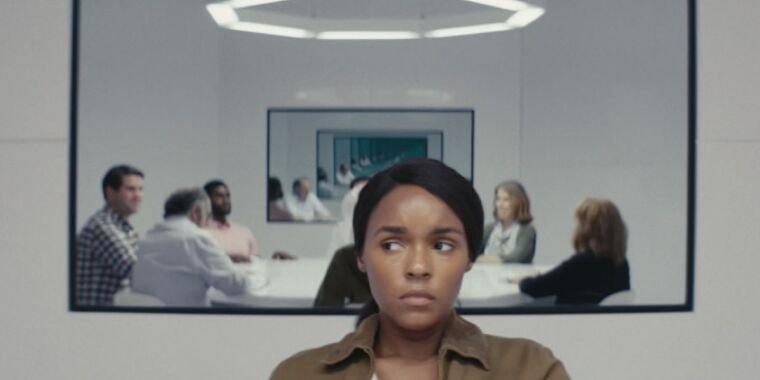 Janelle Monáe plays an amnesiac woman with a mysterious past who suspects that everyone around her is hiding a dark secret in the second season of HomecomingAmazon Prime’s critically acclaimed psychological thriller. The first season, starring Julia Roberts, was an adaptation of the popular podcast of the same name, developed for television by showrunner Sam Esmail.

(Some spoilers for S1 below.)

The first season alternated between early 2018 and 2022. In the earlier period, Heidi Bergman (Julia Roberts) is a case worker at a secret government facility known as the Homecoming Transitional Support Center, responsible for treating a young veteran named Walter Cruz (Stephan James), recovering from trauma during his final deployment. In 2022, Heidi lives with her mother in Tampa and works as a waitress. She is approached by a Department of Defense investigator, Thomas Carrasco (Shea Whigham), about a previous complaint that Cruz had been held in the facility against his will. But Heidi can’t remember anything about Cruz or anything related to his case.

We soon learn that the “treatment” at the Homecoming facility is to gradually increase the doses of memory-erasing drugs in the patients’ food. It’s clear that something very bad has happened to Walter and Heidi there, and Carrasco is determined to uncover the truth, leading to a tense final showdown.

Homecoming S1 received critical acclaim, especially for Roberts’ understated performance. It currently has a 98 percent approval rating on Rotten Tomatoes. Amazon had ordered two seasons of the show, so we’d always get an S2, although S1 wrapped up its story pretty nicely.

According to S2’s official premise, Monáe’s as-yet-unnamed character “wakes up in a rowboat on a lake, with no memory of how she got there — or even who she is. Her ensuing quest for identity will take her to the heart of the Geist Group, the unconventional wellness company behind the Homecoming Initiative.” That doesn’t give much away. But Esmail told TVLine last year that S2 will be significantly different from the original podcast.

Esmail also said a post-credits scene in the S1 finale — in which Geist employee Audrey Temple (Hong Chao) rubbed the memory-erasing drug on her wrists to calm her nerves — was “a hint of things to come.” We do know that Chao will return for S2, along with James’ Walter Cruz, whose attempts to rebuild his life after S1 ran aground when, per Amazon, “he begins to realize there’s an even more insidious version of the program.” is on the way – if only he can remember.”

Now we finally have a full trailer to shed some more light on what to expect. We see the mysterious woman wake up in her rowboat and a voiceover asks a series of questions about who she is, where she lives, her birthday, and so on. Each time she replies, “I don’t know.” We catch snippets of the woman being treated at a hospital, entering the Geist lobby and joining some sort of strange support group. “I knew there was something wrong with me, but I couldn’t explain it to anyone,” she says in another voiceover. “It was like the people around me were keeping a secret. Like we were in a movie. And everyone knew we were in a movie except me.”

The plight of the amnesiac woman is almost certainly related to the memory-erasing substance Audrey rubbed on her wrists in that post-credit scene. It is apparently derived from the fruit of a strange plant grown on a farm as part of a military R&D program. (That’s Joan Cusack in uniform declaring, “This is all critical military technology.”) Meanwhile, Audrey has been warned that an investigation is underway following a complaint. case.

We see Walter Cruz visit the Department of Veterans Affairs looking for help, but the bureaucrat he’s talking to just says “I’m sorry” and then freezes. It’s almost like something is tampering with Walter’s perception of time. And of course, Monáe’s character clearly intends to ask too many awkward questions as she tries to figure out what happened to her, despite the warning, “If you keep hammering at this, it’s going to bleed.”

What does it all mean? We’ll have to wait a few weeks to find out, but it’s a good bet that S2 will use the same strategy of alternating between two different time periods to tell its story, as the trailer seems to switch between past and present. Homecoming S2 will debut on Amazon Prime on May 22, 2020.