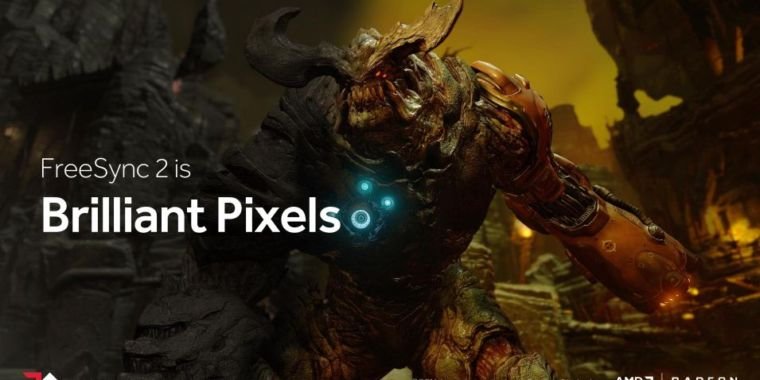 FreeSync, AMD’s variable refresh rate technology for gaming monitors, now comes in a slicker and potentially more attractive version. FreeSync 2, which will co-exist with FreeSync, combines variable refresh rates with the many HDR displays expected to make a splash at CES 2017. Not only that, but it promises to solve some of the more pressing issues with its predecessor, too. including patchy support for low frame rate compensation (LFC) and required low latency levels.

At a basic level, Freesync, like Nvidia’s rival G-Sync technology, synchronizes the monitor’s refresh rate with the frames per second output of the game currently being played. This eliminates the input lag associated with using v-sync (which typically locks games at up to 60 FPS no matter how fast the PC pushes frames out) or with v-sync off, which can cause unsightly screen cracks the more the game runs. pushes out frames than the monitor can handle.

The problem with FreeSync compared to G-Sync is that it only works between specified refresh rates — 40 Hz to 75 Hz, for example, rather than an arbitrary number — and those specified refresh rates can vary from monitor to monitor. This results in problems when the FPS performance drops below that window, with FreeSync going to the default v-sync on or off. AMD introduced LFC with its Radeon Crimson software to compensate for this. LFC doubles the frame rate sent to the monitor in software (G-Sync does this in hardware), to keep the perceived frame rate high enough to stay within the monitor’s variable refresh range.

Unfortunately, LFC is only compatible with a handful of FreeSync monitors, which have a maximum refresh rate that is 2.5x (or higher) than the minimum variable refresh rate. With FreeSync 2, AMD requires monitor manufacturers to support LFC, which solves the problem.

AMD also requires manufacturers to use panels with a minimum allowable dynamic color and brightness range that is twice as vivid as standard sRGB displays for HDR compatibility. However, HDR on PC is a more complex beast than just panel brightness. First, a game performs hue mapping after an engine renders a scene. Then, when the frame is passed to a monitor, it is re-tinted to fit the supported color range of the screen. That may or may not be the same color space required for HDR10 or Dolby Vision. This two-stage process takes time and introduces latency.

With FreeSync 2, AMD removes the second step and connects the game engine directly to the HDR display. When you plug in a FreeSync 2 display, the display announces its HDR capabilities and the AMD graphics driver sends that information to the game engine. This ensures that gamers get the best possible image quality, as the game maps tone maps to the screen’s native color space, while also reducing input lag. Unfortunately, this also means that for FreeSync 2 and HDR to work, AMD needs the specific color and brightness capabilities of each FreeSync 2 monitor, while games and video players must be enabled through AMD’s API. AMD will have to convince many hardware partners to realize FreeSync 2.

Because LFC, HDR, and low latency are requirements of FreeSync 2, AMD implements a display certification process. FreeSync 2 monitors won’t be cheap either, and at this point AMD isn’t sure when exactly they’ll launch. Currently, it hopes that they will hit the market in the first half of 2017. Samsung has confirmed that it will use FreeSync 2 in some of its upcoming monitors.