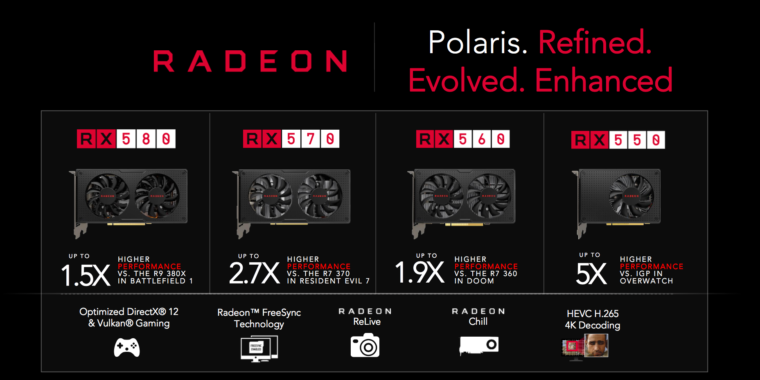 While some may call the 500 series a rebrand, AMD says an improved 14nm FinFET fabrication process has helped boost clock speeds. The reference design RX 580, which shares the same core specifications as the RX 480, including 36 compute cores and a 256-bit memory interface, is clocked at 1257MHz and boosted to 1340MHz. That’s just over 100MHz higher than the RX 480.

There are similar clock speed improvements across the 500 series, though partners are expected to push those clocks even higher. Indeed, AMD won’t produce reference cards, so generally expect higher prices than MSRP, but also better performance.

The new RX 550 is the new RX 550. Like the RX 560, no additional board power is required to function, making it a convenient upgrade for standard PCs. It features a boost clock of 1180 MHz, eight compute units and 2 GB of GDDR5 memory with a 128-bit interface. The RX 560 is intended to be an ideal upgrade for those with integrated graphics, with up to four times the performance of integrated graphics solutions such as Intel HD 530.

While the 500 series isn’t the most exciting upgrade, it’s a good value. A recent spate of driver improvements has made the RX 480 (and thus hopefully the RX 580) extremely competitive with Nvidia’s GTX 1060, especially when price is taken into account. They all also support Freesync, as well as HDR and 4K. Those looking for a better bargain might even be able to buy a 400-series card on the cheap, as retailers are clearing out old stock.