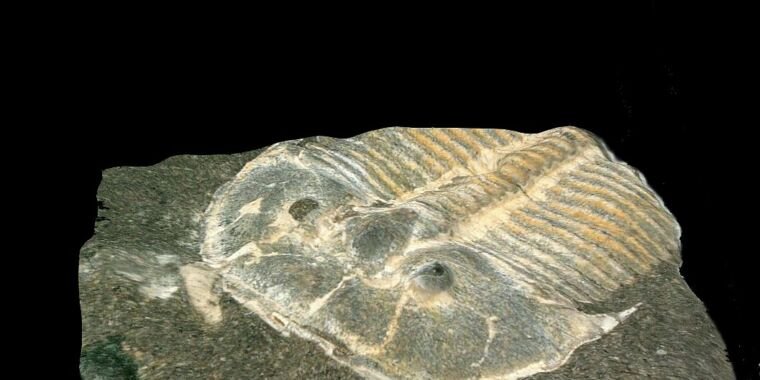 Among fossils, trilobites are rock stars. They’re cute (as stony arthropods go), with a segmented shape distinctive enough to be a common logo. But they are also fascinating because there are so many examples in the fossil record over such a long period of time, as they thrive for over 250 million years. Studying their evolution is enlightening in part because the chances of finding excellent specimens are high.

The fossil in question comes from 429 million year old sedimentary rocks in the Czech Republic. It is called a centimeter long trilobite Aulacopleura koninckii which split in two when the rock layer was peeled apart. The shape of the structures in one of his two eyes is nicely visible, with pieces divided between the two halves.

Like other early arthropods, trilobites had compound eyes — think the multifaceted cluster of a fly’s eye. Each unit in that cluster is called an ‘ommatidium’. At the top of each ommatidium is a lens, with cone cells underneath that also help focus incoming light. That light is carried down a stem-like “rhabdom” to reach the receptor cells that send signals to the brain. The researchers were able to distinguish each of these components in the fossil.

Some details of these structures have been discussed for trilobites, because it’s not every day that you come across a fossil that preserves them. Most notably, the composition of the lens and cone pair is a bit unclear, with questions about whether trilobites formed useful lenses using the mineral calcite, as some organisms do today. These researchers found an older (more than 500 million years old) trilobite eye a few years ago and noticed a skinny, non-calcite lens that left the refractive work to fleshy cone cells.

This trilobite eye looks different. The cone appears miniscule, while the lens is considerably thicker. Even a thicker lens made of chitin isn’t refractive enough to focus light underwater, but with calcite in it, it could handle the task. The researchers suspect that is the case here.

Another interesting observation relates to what is surrounding this whole structure. In this kind of compound eye, each ommatidium must be wrapped in something that blocks light to isolate it from the neighboring ommatidia, keeping each unit separate. The fossil specimen shows structural walls that perform that task, but the researchers also see signs of dark pigment in those walls. (Incredibly, these pigments are stable enough to be preserved in fossils.) That seems doubly so, but modern translucent critters like shrimp also have pigments in those walls, because the walls themselves aren’t enough to block light. So, the researchers suggest, these trilobites could also be translucent.

General, everything about this compound eye looks modern – “similar to that of living bees, dragonflies and many diurnal” [daylight-dwelling] Crustaceans,” the researchers write. That would show how long ago this system evolved.

Given things like the length-to-width ratios of the lenses and ommatidia in the fossil, the researchers can also use analogies with modern organisms to guess the trilobite’s habitat as well. It probably lived in well-lit, shallow waters and was active during the day, they say. So if you could travel back 429 million years, that’s what you’d look for A. koninckiiscurrying around like a glassy, ​​flattened shrimp.