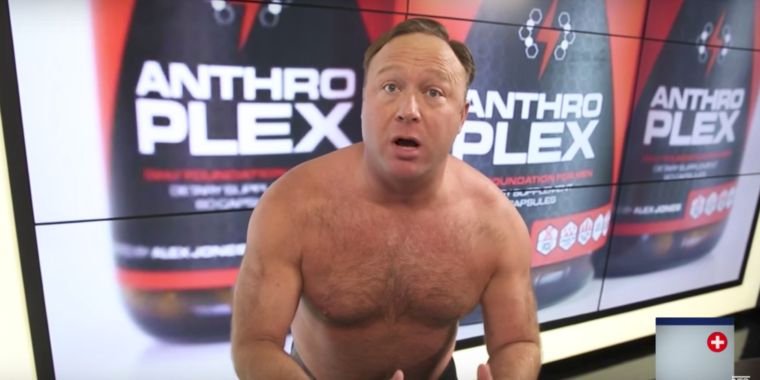 Alex Jones and fans of homeopathy may have something in common.

Jones’ wildly popular supplements, sold on his Infowars.com site, are nothing more than run-of-the-mill vitamin blends that have little to no data backing up the touted health benefits — basically the same as the vitamins found in any pharmacy or health store , according to independent lab tests. But there are two main differences: The far-right talk show hosts’ supplements are much more expensive, and they tend to be weaker than garden variety supplements. Reminiscent of the highly diluted treatments used by homeopaths, Jones’s supplements were often so diluted that even if those vitamin and herbal blends did offer some health benefits, the doses are probably too small to be effective.

That’s all according to an independent lab analysis performed on several supplements by Labdoor, a San Francisco-based laboratory that tests nutritional supplements. The analysis was commissioned by BuzzFeed News, which reported the results late Wednesday.

We have tested samples in triplicate and where possible we have compared those results with at least two independent analytical laboratories, so we are fully confident in our conclusions.

The good news is that the tests revealed no surprises or inappropriate ingredients. The Infowars supplements largely contain the ingredients listed on their packages and do not contain any unnamed or banned ingredients, such as stimulants such as Viagra.

But the supplements generally contain smaller doses than comparable, much less expensive supplements sold in convenience stores, according to Labdoor. For example, Infowars’ Anthroplex, which the label says contains zinc and a proprietary blend of herbal ingredients, contained 31 percent less zinc orotate than the 1 mg per serving listed on the label, according to Labdoor. And the stated amount is already much lower than other zinc-based supplements on the market. For example, the zinc orotate supplements sold on Amazon had servings ranging from 9.5mg to 51mg, and they were significantly less expensive. A 200-capsule bottle of 9.5mg zinc orotate capsules sold for $14 on Amazon, while a 60-capsule bottle of Anthroplex is currently on sale for $29.95, down from $39.95.

Similarly, the nascent iodine supplement that Infowars sells as “Survival Shield X-2” is labeled as containing 1,950 mcg of nascent iodine and has a list price of $39.95 (although it currently retails for $17.76). Labdoor found it contained slightly below the stated amount. However, a similar product on Amazon contains 2,694 mcg and sells for about $19.

In addition to the weak products, Jones also sells products that Labdoor described as “far-fetched,” including the $149.95 bottle of “DNA Force,” a proprietary blend to improve “DNA health.”

Despite the hefty price tags and weak ingredients, Jones has managed to sell the products. A former Infowars employee told BuzzFeed that “[Jones] can sell 500 supplements in an hour.” And New York magazine roughly estimated that Jones could make $15 million from the products over a two-year period. During a recent episode of Last week tonight, host John Oliver even devoted an entire segment to outlining how Jones benefits from these products and its associated hyperbolic health claims.