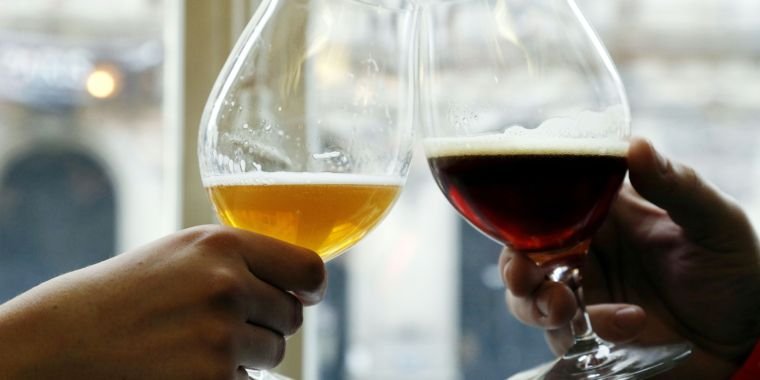 Cheers! – not for your health, but for your memory.

Drinking alcohol after learning information appears to help the brain’s ability to store and remember that information later, according to a study of drinking at home in Scientific Reports. The memory-boosting effect, seen in previous lab studies, was related to how much a person drank: the more alcohol, the better the memory the next day.

However, the study’s authors, led by psychopharmacologist Celia Morgan of the University of Exeter, aren’t sure why alcohol improves memory in this way. They embarked on the experiment hypothesizing that alcohol blocks the brain’s ability to record new memories, releasing noggin power to carefully encode and store the new set of memories that just arrived. remember new things get wobbly, but your memory of events and information prior to that drink may be firmer than usual.

At least that was the researchers’ hypothesis. It didn’t quite hold up – it added a little secret sauce to this memory-enhancing cocktail story. But with about 38 percent of the world’s population hip to the hooch, the researchers are determined to find out what alcohol does to our brains. For the public good, they write, they must assess “the harms and potential benefits of this ubiquitous substance.”

For the study, Morgan and colleagues recruited 88 alcohol-drinking adults (between the ages of 18 – which is legal in the UK – and 53). The experimental procedure always started around 6:00 PM at a participant’s home and ended around 10:00 AM the next day. Researchers tested their memory performance before and after drinking or without alcohol.

In the first phase, the learning phase, the participants started a word game around 6 pm. Participants listened to 24 made-up words, repeated 36 times in different orders. The nonsense words resembled real words, but with extra letters, such as “frenzylk” instead of frenzy. At about 7 p.m., the participants put their memory to the test and saw how many of these new words they could remember when asked with partial words, such as frenzy_ _.

Then around 8 p.m., after the word madness, half of the participants were randomly assigned to drink. They could drink as much as they wanted, as long as they kept up. The average amount of alcohol consumed during the evening was about 82.6 grams, equivalent to nearly six standard American drinks (14 grams each). The other half continued sober.

At 10 p.m., after some were tipsy, the contestants began another memory challenge, this one with pictures. Participants saw 128 images on a screen and were asked to classify them as “indoor” or “outdoor.” For example, a video cassette would be an item for indoors, while a giraffe would be better suited outdoors. Next, the participants saw a jumble of 192 images, some identical to those in the first set, some similar, and some completely new. For example, there could be the same picture of a giraffe, a picture of a giraffe in a different position, and a never-before-seen picture of a hat. The participants had to sort them correctly as old, similar or new.

With that, phase one was over. Drinkers could continue to drink if they wanted, and all participants went to bed when they wanted. Phase two started at 10am the next morning. The participants took the word test again and then took the picture test again (this time with a slightly different set of 192 images).

They were partly right. The drinkers did indeed perform better on the made-up word challenge. The fasting group showed a very slight decline in recalling the words between the evening and morning tests. But the drinkers scored statistically significantly better the next morning than in the evening – not just the same as in the evening. This refers to the idea that alcohol doesn’t just help reduce forgetfulness; instead, it can reinforce freshly formed knowledge and improve memory.

Still, the results of the image-based memory challenge were not so crystal clear. Drinkers fared no worse than sober people. They all did about the same in both the evening and morning tests.

With word test results alone, researchers might be inclined to think that alcohol improves memory by disrupting memory coding in the hippocampus, a brain region critical to memory. But without the corroborative result suggesting that alcohol interferes with post-drinking image memory, “this claim should be made with caution,” the researchers concluded.

The study supports the previous lab-based drinking studies that showed alcohol improved memory. This suggests that researchers could use more natural drinking environments to study the effects of alcohol in the future. In those future studies, researchers may look at the role that sleep may play. The researchers note that alcohol may increase slow wave sleep (SWS), or deep sleep, which is also crucial for encoding and storing memory. Thus, their new hypothesis is that alcohol-enhanced memory may be a result of enhanced SWS rather than interference with new memories. That’s for the next round of soused science.