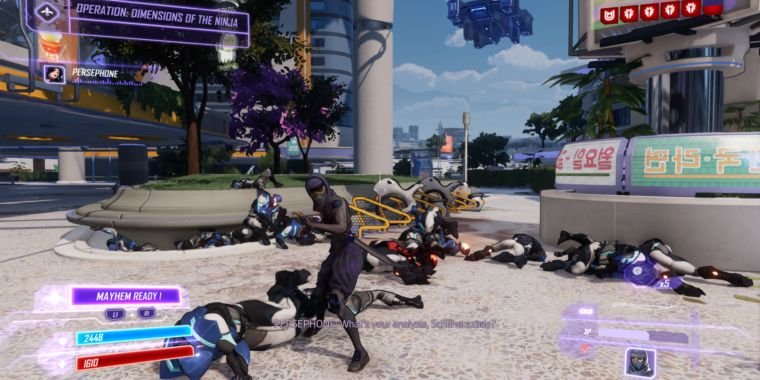 Scratch under the surface of Agents of Mayhem– the hero-based shoot-and-loot open-world game from developer Volition – and you’ll only find more shooting, looting and hero-based action. It lacks the surprisingly genuine camaraderie of the studios later on Saints Row titles. It’s not as pretty, thematically simple as Red Faction: Guerillabut it is a few more solid hours of fun.

Agents of Mayhem is a pseudo-sequel/reboot/spinoff/prequel to Saints Row (and then Red Faction-all three series are tied together in subtle and not-so-subtle ways), but only diehard fans are likely to notice. Saints Row regulars like Pierce Washington, Oleg Kirrlov, and even Johnny Gat make an appearance (the latter, for pre-orders only). Yet they all operate under code names in the GI Joe– like Mayhem, fighting the Cobra-like Legion.

The game tries to seal the cartoon deal on Saturday morning with factual cartoon cutscenes. They just look too cheap — like Marvel’s oddly shaded modern dishes, but jerkier — to take the gimmick at all. It doesn’t help to make it seem less rushed when some scenes, in particular, aren’t animated at all.

The soul in Seoul

Cheap or not, the animation is what is used to convey the game’s pretty decent core. The evil council of Legion wants to take over the world, while the slightly less reprehensible Mayhem wants to stop them. A battle of “evil versus evil” ensues, as Mayhem’s ex-criminal director puts it. It’s a brighter and more colorful conflict than 90 percent of the open world games, and it puts me in the mood for the overt shenanigans much better.

This battle takes place on the streets of a futuristic Seoul, South Korea. By all rights, that should provide as evocative space as any open-world game environment has ever provided. Here, however, it’s as flat, uncontrasted, and sometimes even lifeless as the 2D scenes that tell the story. There just isn’t much going on in there Agents of Mayhemthe world. This is partly due to the lack of interesting side content and optional missions in the game and partly due to the noticeable scarcity of people and cars in the city.

Fortunately, the agents you manage and work with are more alive. You can switch between up to three of them just as seamlessly as you can switch weapons in other games, and in a way you to be just cycle through an arsenal of destruction. Each agent is tied to a single weapon with infinite ammunition plus special and “ultimate” abilities that recharge as you fight. The upside is that each “weapon” has its own unique design, personality, and response to barking bosses.

The huge selection reminds me of overwatch– both mechanically and with its multiculturalism. However, there are some tricky character choices. “Hardtack” is the same beefy, screaming, swearing black man we’ve seen in everything from Mortal Kombat until Weapons of War. “Oni” is a stereotypically named Japanese ex-Yakuza who usually blurts out about “honor” and his late family. Most of the cast avoids clichés, and I can’t think of a single agent I didn’t like to play.

Switching between characters on the fly feels natural and doesn’t interrupt the weight of shooting. I liked starting with the minigun-carrying, roller-derby-blocker Daisy to chew up enemy shields. Then I jumped on Oni to debuffer big targets before letting the ninja mop up Scheherazade at close range.

That rhythm is essential, as the actual mission design is very uninspired. Nearly every chapter follows the same three-act structure: scan the city in search of something to fight or blow up, enter a Legion facility that looks suspiciously like any other Legion facility, fight a boss. If the driving, shooting, and hot-swapping agents weren’t as fun as they are, there wouldn’t be much reason to scroll through the entire structure of the game.

Another thing that may have eased the boredom is co-op. Saint’s Row: The third and Saints Row 4 had an excellently ridiculous multiplayer, and Agents of Mayhem‘s characters seem even more perfect for it. Unfortunately, the only common activities are daily challenges, where players on each platform have to work towards meeting quotas, such as killing X elite enemies, opening Y chests, etc.

It is the first, most obvious sign that Agents of Mayhem is meant to be played regularly, even after the final boss is killed. By the time I finished the game, only a handful of my dozen agents were at “max” level. It seems that you can also grind some sort of “prestige” levels, such as: Diablo 3‘s Paragon system, to keep the upgrade cycle going. Also as diablothere are scads of difficulties to choose from, with greater rewards for completing missions at higher levels.

I’m just not sure if that’s enough for me. As endearing as Mayhem’s employees are, the world’s design and mission don’t match. I could dive through dungeons. I could grind the cops I wish I had a better excuse to spend more time with. I could hunt for loot drops that change their appearance and increase their special abilities. The excuses are: over there. I just don’t know if they’re worth it.

Even the character-driven stuff felt a little dry at the end. Agents of MayhemThe conclusion is as “video game” as I’ve ever seen. You fight a boss. There’s a quick and somewhat cheap-looking cutscene that makes up an obvious sequel or a bit of DLC. The battle is over, but the war rages on – things like that. I suppose it’s thematically appropriate, in the same way GI Joe never does really defeats Cobra or that the Autobots never defeat the Decepticons. I would have just found something fun with a little more heart on the characters that I enjoyed more than the rest of the game.

But hey, the nice thing about the promise of DLC or a direct sequel is that I might get my wish. Until then, I’m happy enough with the time I had; happy enough that I doubt I’ll be going back for the grind anytime soon.

verdict: Agents of Mayhem has spirit, but not as much as his Saints Row predecessors and not enough to completely surpass the paint by number design. Try it.