Again with feeling: climate models do not exaggerate the warming | Techilink 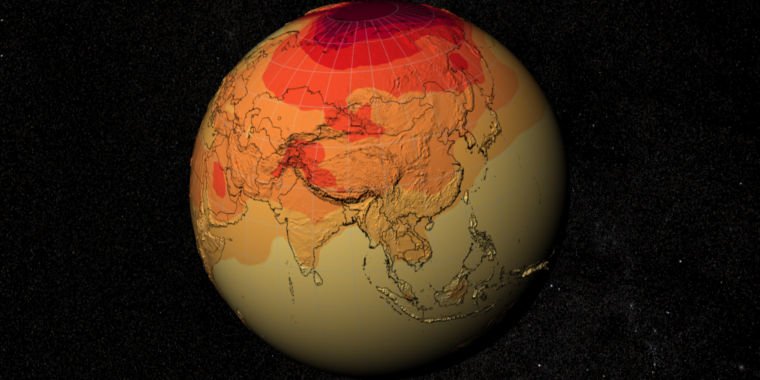 If you follow climate science news, you know that one of the hottest topics is “climate sensitivity” — the precise amount of warming you get for a given increase in greenhouse gases. A few years ago, a few papers caused a stir by attempting to estimate this sensitivity based on simple equations for the recent past, and came up with a lower warming sensitivity than numerous other studies based on climate models or paleoclimate records. The latest IPCC report even expanded the estimated range slightly to include these studies, which turned out to be controversial.

Researchers have already found reasons to think those low sensitivity estimates were problematic, including the fact that the simplistic, global representations of warming and cooling factors missed some key spatial patterns that change things. A new study by Kyle Armor of the University of Washington addresses the question from a different angle.

There are several time frames we can use to describe climate sensitivity. The one you hear most about is called “equilibrium climate sensitivity.” Technically, this is the amount of warming you would get if you immediately doubled atmospheric CO.2 and waited a few centuries or so for the climate to adjust. But there’s also something called the “transient climate response,” defined as the warming you get at the time a gradually rising CO content2 reaches the doubling point. This is a smaller number, because the climate does not have time to fully balance.

Estimates based on the past century or so actually calculate the shorter-term transient climate response. That number is then converted to the longer-term equilibrium climate sensitivity, assuming that the sensitivity is essentially constant — that you can easily extrapolate the short-term response in a sense.

However, Armor points out that a number of studies have shown that assumption to be a bad one. If you track the strength of the feedbacks that amplify or dampen the warming caused by added greenhouse gases in long-term climate model simulations, you notice that model sensitivity is greater in the latter part of the simulation. This appears to be due to the fact that the Earth does not warm up evenly over time. Some regions are warming faster than others, and that pattern is changing over time. For example, it takes a long time for the Southern Ocean to begin to warm significantly because it takes time for the ocean circulation to bring in warmer water from other parts of the world. Once that water begins to arrive, the Southern Ocean’s warming trend picks up, enhancing the region’s feedback that drives warming.

This subtle detail makes a significant difference when trying to extrapolate from short-term transient climate response to long-term equilibrium climate sensitivity. Armor demonstrates this by analyzing the climate model simulations collected to inform the latest IPCC report. By tracking the strength of the feedback over time, you can see how much a sensitivity estimate would differ from that model’s actual sensitivity at any given time.

During the first hundred years of gradually increasing CO2 simulation, the apparent sensitivity gets closer and closer to the true long-term sensitivity. But even around the end of that century, the true sensitivity (on average) is still about 25 percent greater than what you would calculate from the short-term response — a difference that can’t be ignored.

It’s even a little more complicated than that, because the number is higher for longer-term higher-sensitivity models, which take a little longer to reach equilibrium. (Conversely, it’s lower for lower-sensitivity models.) This tells you something important: You can’t really calculate long-term sensitivity based on short-term response alone.

But to demonstrate the estimated impact, Armor adjusts the recent low-sensitivity estimates using the average of 25 percent of the models. The most prominent estimate came from a 2013 study led by Alexander Otto. Based on global temperatures up to 2009, that study estimated an equilibrium climate sensitivity of 2.0 degrees Celsius to a doubling of CO2– well below the general consensus of 3.0 degrees Celsius from other research. A 2016 study tried to revise that low estimate by correcting for the fact that the temperature dataset wasn’t perfect, and it brought the number to 2.5 degrees Celsius, which is still a bit low.

If the research on climate sensitivity makes your head spin, the most important thing to remember is that our estimates haven’t changed much over time. The range of 1.5-4.5 degrees Celsius for a doubling of CO2 described as likely in the 5th IPCC report in 2013 the same range given in the 1979 National Research Council report that provided the technical definition of equilibrium climate sensitivity (putting our best estimate at 3.0 degrees Celsius). Confidence has clearly increased with more research, and a radical rewrite of this value, which is crucial to the future of the Earth’s climate, is quite unlikely at this point.