After Tuesday’s launch, SpaceX is expanding its fleet of used rockets [Updated] | Techilink 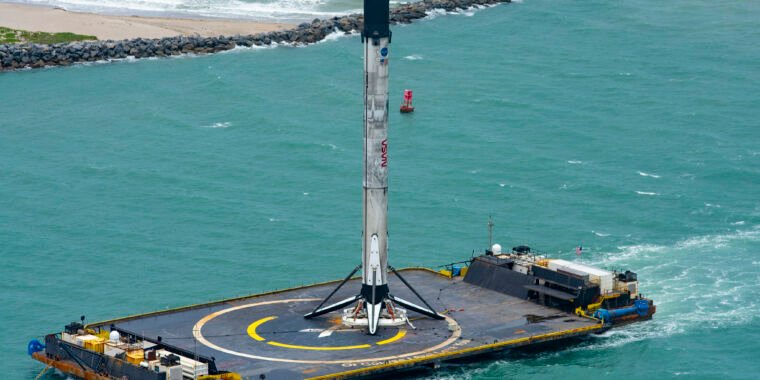 4:20 PM ET update: A Falcon 9 rocket lifted off the end of its launch window Tuesday afternoon, putting a GPS satellite into proper parking orbit. The spacecraft was scheduled to deploy approximately 1 hour 29 minutes after the launch of the Falcon 9 rocket’s second stage.

After exiting the second stage, the first stage descended back to Earth to successfully land on the Just read the instructions drone ship. SpaceX now has five used first stages available for additional missions.

Original post: On Tuesday, SpaceX will attempt to launch a 3.7-ton Global Positioning System (GPS) satellite for the US Air Force. This GPS III launch is scheduled on a Falcon 9 rocket between 3:55 PM ET and 4:10 PM ET (19:56-8:10 PM UTC) from Cape Canaveral Air Force Station in Florida.

The launch marks the first time SpaceX will attempt to recover a booster used to launch a satellite for the US military. Although the launch was originally agreed to fly on a replaceable booster, Space News reports that the US Space Force’s Space and Missile Systems Center agreed to revise some mission requirements so that SpaceX could fly the booster back. In return, the company took “several million dollars” from the launch price, which was originally awarded to SpaceX in 2017 for $96.5 million.

SpaceX needs this first phase back to balance out a busy second half of the year.

On May 11, 2018, the company launched the first of its new “Block 5” version of its Falcon 9 rocket. This new version of the first stage incorporated all of the company’s previous performance upgrades to the Falcon 9 rocket, while maximizing its reuse. It worked — SpaceX has now flown five times with two different Falcon 9 cores, and it may be flying a first leg for its sixth time later this summer.

The success of the Block 5 rocket means that SpaceX has had to spend less time and resources building Falcon 9 first stages. Since May 2018, it has launched 31 times on a Block 5 version of the Falcon 9 rocket, while using only 10 cores. In other words, reuse has saved SpaceX the cost of 189 Merlin rocket engines, dozens of fuel tanks, and many complex electronic systems.

But of these ten first stages, only four are left. Over the past two years, SpaceX has lost a few of its first stages — for example, in December 2018, a net fin pump failure caused a first stage to land just off the coast of Florida — and it purposely consumed some during the launch of particular heavy loads . So of its fleet of 10 Falcon 9 rocket first stages (based on input from readers and this source on the r/SpaceX subreddit), SpaceX currently only has these cores in service for Falcon 9 launches:

Tuesday’s launch of the Lockheed Martin-built GPS III satellite will therefore add another booster to SpaceX’s fleet of first stage rockets. The company has two more new Falcon 9 boosters in the pipeline, with another GPS III mission in August and then the Crew-1 mission with four NASA astronauts to the International Space Station, likely sometime in September.

Still, SpaceX will have to be careful in managing its fleet. The company has planned a busy second half of 2020, with about six additional Starlink internet satellite launches, several commercial missions, a few NASA launches and a few US military launches on the manifest.

To complete all of these missions, the company must continue to successfully return the first stages, go beyond five flights per booster, and potentially further reduce the turnaround time between missions. So far, the company’s record for the time it takes to pre-check and recertify a Falcon 9 first stage for flight is 63 days.

The bottom line is that today’s launch of a Falcon 9 rocket is a vital mission for the US Air Force. But for SpaceX, getting the new core back on the Just read the instructions droneship will be just as important to fly out a long manifesto in 2020. Reuse is no longer experimental; it is on the critical path.

The webcast below should start about 15 minutes before the launch window opens.