After orbiting Saturn for 13 years, Cassini has become part of the planet | Techilink 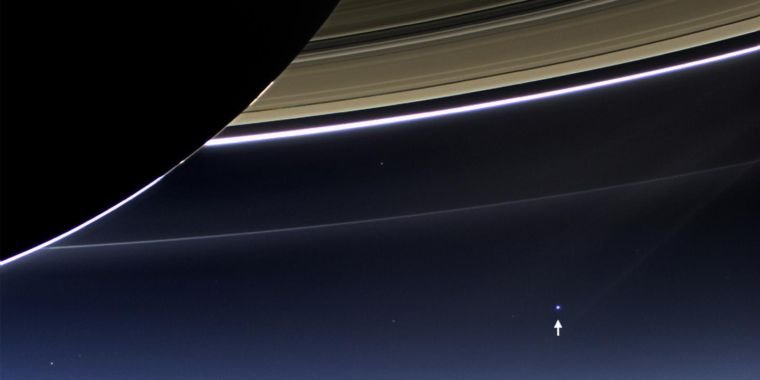 The Cassini spacecraft, after spending 13 nearly flawless years revealing a complex, ringed gas giant along with its vast array of enigmatic moons — and finding two worlds capable of supporting life — died Friday morning. It ended after the engines were turned up to full power and flown directly into Saturn’s maw. It was 19 years old.

The spacecraft made its final major maneuver on Monday, flying close enough to Saturn’s largest moon Titan to push Cassini into a collision course with the planet. Cassini took its final image on Thursday and began accelerating to more than 90,000 mph on Friday morning. There was no return.

Cassini had to die this way. Fuel reserves were running low. Scientists didn’t want to risk that, however unlikely, any life from Earth had survived 20 years aboard the spacecraft and could one day contaminate one of the planet’s moons, such as Titan or Enceladus.

Early Friday, as Cassini began to fly deeper into Saturn’s atmosphere, molecules from the planet struck the spacecraft. Slowly it started to warm up. The spacecraft’s thrusters, battling to point Cassini’s antenna back at Earth’s long arrays amidst the turbulence, lost their battle. About 1,500 km above the planet’s cloud tops, Cassini began to tumble, fall, fall… fall. NASA scientists at the Jet Propulsion Laboratory lost contact with the spacecraft at 7:55 a.m. ET. It burned and would soon disintegrate and become part of the gas giant it has studied so closely for so long.

NASA’s Cassini orbiter, built with the Huygens lander to descend to Titan’s surface, was launched on October 15, 1997 aboard a Titan IVB/Centaur rocket, and reached Saturn’s orbit on July 1, 2004. That marked the beginning of the end of a journey spanning more than two decades, starting in the 1980s, to get the probe into space and to Saturn.

Voyager 1 had flown by Saturn in 1980, and Voyager 2 followed in 1981. These two iconic probes raised more questions about Saturn than they answered, especially about its moons. Titan, in particular, intrigued scientists with its thick nitrogen atmosphere — the only other world in the solar system with a nitrogen-rich atmosphere like Earth’s. What could be there?

“Voyager was a tease,” planetary scientist Carolyn Porco, who worked on the imaging team for the Voyager mission and led it for Cassini, told Ars. “It was like a fleeting moment in time where you could see for a second what was there. We were left with all these questions. And they were important questions.”

Questions like: Why is one half of that moon dark and the other light? Why are they so weirdly shaped? What are all these things in Saturn’s rings? What could it tell us about the formation of the solar system? And could the atmosphere on Titan allow some kind of exotic life forms to exist?

During its 13 years at Saturn, Cassini returned more than just dazzling images. It found that Titan’s nitrogen-rich atmosphere had a surface pressure 1.6 times that of Earth and had large lakes of methane. The presence of nitrogen along with methane and ultraviolet light reaching the surface created conditions where rich organic chemistry could thrive.

Likewise, Cassini answered important questions about Saturn’s upper atmosphere — mostly hydrogen but about 7 percent helium — and elucidated the nature of its fine rings. It explored the more than five dozen moons that orbit the planet. And upon closer inspection, Cassini discovered tiny moons dancing in gaps between the rings, gaps those tiny moons had created with their own tiny gravitational fields.

And Cassini discovered a huge surprise at one of Saturn’s smaller moons, Enceladus. Large, icy geysers spewed into space. Scientists later confirmed that a relatively large ocean must exist on the moon, beneath the ice. Cassini’s mission was modified to fly through the geysers, and that small world, only about 500 km across, is now considered one of the best places in the solar system to search for existing life.

For the scientists who study Saturn and the outer solar system, Cassini represents a glorious achievement. While saddened by Cassini’s demise, it’s been a great run. “It is the finality of this enormous effort that we all personally put into Cassini,” Porco said. It was three decades of her life. “It’s kind of like a death in the family. That’s what it will feel like.”

And further? NASA is developing an orbiter mission to Jupiter’s moon Europa and possibly a lander. And as the agency makes progress, none of these $3 billion to $4 billion missions are guaranteed to fly. Therefore, after Cassini’s final transmission this morning, scientists will have lost more than one old, faithful friend in the outer solar system. The worlds beyond will have gotten a lot darker.