After more speculation about the cause of the ISS leak, NASA releases a new statement | Techilink 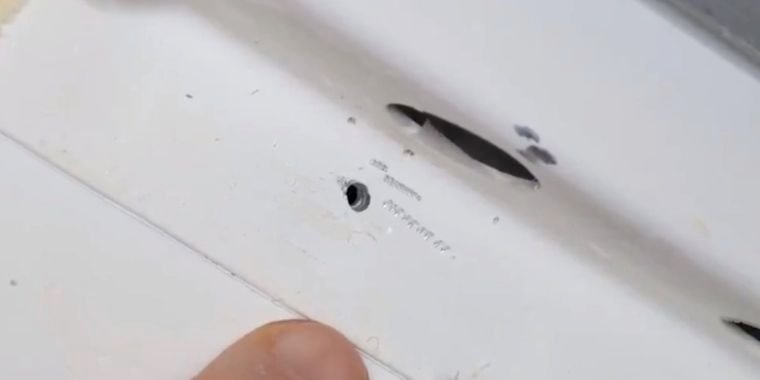 A thorough Russian investigation into an August leak in the orbital module of a Russian Soyuz spacecraft, attached to the International Space Station, will not be concluded until November. But this week, the head of the Russian space agency Roscosmos rekindled the controversy over the leak with some remarks made during a televised appearance.

A preliminary investigation, according to Russian space official, Deputy Prime Minister Dmitry Rogozin, “concluded that a manufacturing defect had been ruled out, which is important to establish the truth.” So if it wasn’t a manufacturing defect, what was? As Rogozin failed to say, this fueled speculation in some media that the hole was deliberately drilled into space by NASA astronauts. This theory makes no sense, but it seems to play well for the Russian audience.

Following these latest comments, and with an impending October 11 launch of the Soyuz spacecraft that will take NASA astronaut Nick Hague to the International Space Station, the US space agency felt the need to release a new statement on Wednesday. There is:

On August 29, 2018, a small hole was discovered in the International Space Station. This resulted in a pressure leak. The hole has been identified and repaired by the space station crew.

This conclusion does not necessarily mean that the hole was created intentionally or with malicious intent. NASA and Roscosmos are investigating the incident to determine the cause. The International Space Station Program is tentatively planning a spacewalk in November to gather more information.

On October 11, American astronaut Nick Hague and Russian cosmonaut Alexey Ovchinin will be launched to the International Space Station on a Russian Soyuz MS-10 spacecraft from the Baikonur cosmodrome in Kazakhstan. Administrator Bridenstine will attend the launch and plans to meet Mr. Rogozin. This will be their first personal meeting. They had a phone call on Sept. 12 in which they discussed the International Space Station leak.

Some of the language in this statement can be a little hard to parse, but after speaking to a NASA official, this is how we were told to interpret this.

First, NASA wanted to send a message that it has confidence in the Soyuz spacecraft — the only means that NASA and Russian astronauts can currently fly to and from the space station — ahead of next week’s launch. Hence the language that the August leak “does not categorically affect future production”.

Second, the space agency wanted to confirm its opinion that this probably wasn’t intentional sabotage — and certainly not an act of NASA astronauts in space.

So what really happened? The prevailing theory at NASA is that the Soyuz spacecraft, which arrived at the station in June, was accidentally damaged at some point during the manufacturing or integration process. This could have happened during the manufacturing phase at RSC Energia’s facilities in Samara, Russia, or at the processing and integration facilities in Baikonur, Kazakhstan, from which the spacecraft was launched.

After this apparent drilling accident, a technician may have spotted a drilling error and covered the hole with glue, preventing the problem from being detected during a vacuum test. This temporary patch failed a few months later after prolonged exposure in space. This would apparently not be considered a “manufacturing error” by the Russians’ definition, such as using incorrect metals or other processes to make the vehicles.

The bottom line is that this relatively small leak has grown into a significant gap between the Russian and US space programs. Overall, they have a good relationship and the two must work together to keep the space station in orbit. But letting Rogozin run around and speak before the final report probably causes more problems than it solves. This is likely the real message implied in Wednesday’s statement from NASA.